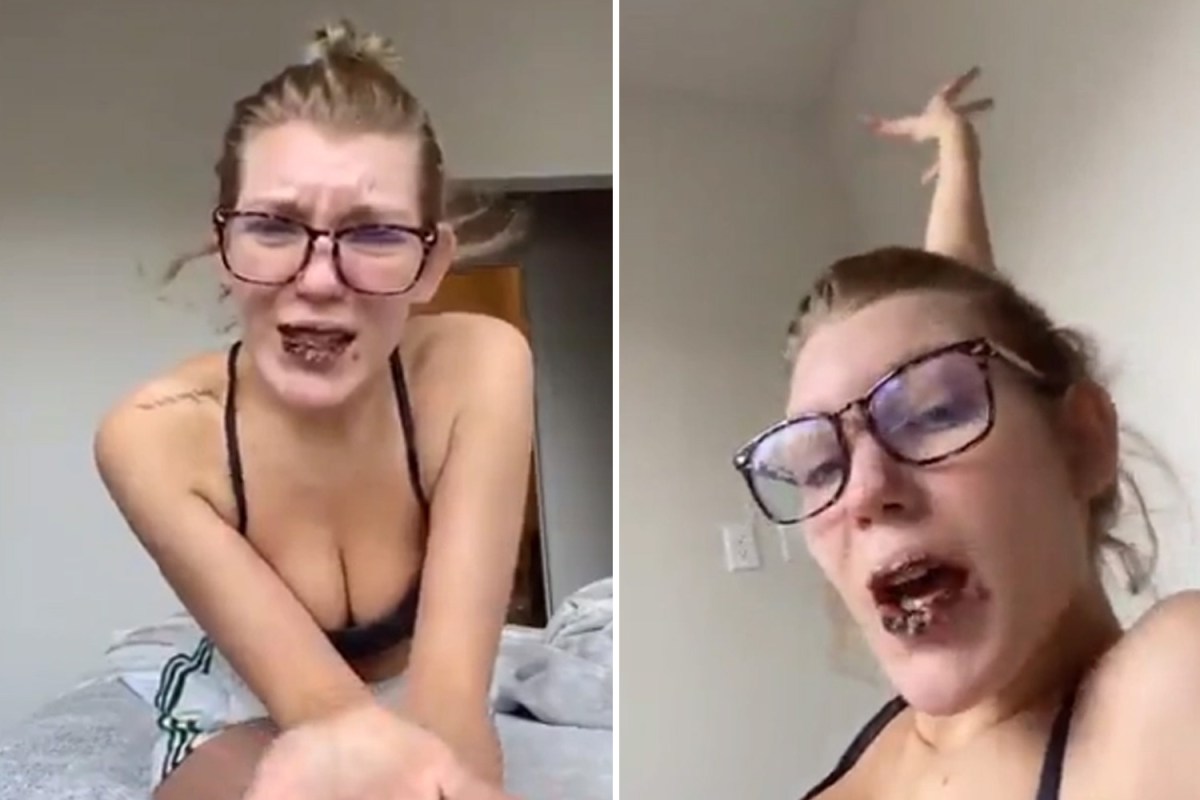 
A WOMAN claims her lips turned black and yellow after acne medication triggered a rare side effect as she battled Covid.

She posted a video on TikTok saying her treatment can cause dry, flaky skin, which was then made worse by the virus.

The woman, from the US, said it has a high dose of Vitamin A – isotretinoin – in it which closes up the skin’s sebaceous glands.

These glands have been linked to the development of severe acne if they get clogged.

The TikToker, called Avery, revealed her black and swollen lips after getting Delta.

She explained they were already dry and cracked from her medication, but when she caught the virus she developed yellow blisters and a thick crust on her lips.

Doctors diagnosed her with impetigo, a skin infection due to Streptococcus bacteria but it got worse, with her lips turning black and weeping.

After rushing to hospital she explained what had happened, saying: “It’s called mucormycosis and it happened because I had the cracks in my lips.

“It’s Covid that manifested in my mouth because of my cracked lips, so be careful, because it’s disgusting.

“When I got sick with the second Covid [Delta variant] I got strep, a sinus infection, an ear infection, literally the whole works. It was terrible, I was dying for a while.

“Then I noticed my lips were starting to get bad.”

She told followers the side effects from her acne treatment combined with Covid led to the rare fungal infection.

It can affect sinuses, the brain and lungs, among other organs – and if not treated can be deadly.

Avery updated fans with news she had been treated in hospital, and appeared to be in good spirits – aside from frightening herself in the mirror.

India saw many reports of black fungus sparked by the Delta variant earlier in the year.

The rare condition is caused by moulds known as mucromycetes which can kill people whose immune systems are weak.

When the spores – which occur naturally in the environment – are breathed in, they attack the lungs and sinuses before spreading to the face and the brain.

Mucormycosis is the name used for any fungal infection caused by a group of molds called mucormycetes.

These molds live throughout the environment. Mucormycosis mainly affects people who have health problems or take medicines that lower the body’s ability to fight germs and sickness.

According to Centers for Disease Control and Prevention say symptoms vary depending on where the fungus is growing.

Symptoms of rhinocerebral (sinus and brain) mucormycosis include:

Symptoms of pulmonary (lung) mucormycosis include:

Symptoms of gastrointestinal mucormycosis include:

It is thought the condition has exploded in India due to a lack of drugs available to treat it.

Prof David Denning of the Global Action Fund for Fungal infections (GAFFI) and the University of Manchester, said: “Most common places in the body which are affected include the sinuses, nose, and the infection may spread in the back of the eye or down into the palette and forward into the cheek in one or both sides.

“In late cases it can affect the brain directly.

“The other organ most commonly affected is the lung, and it can cause a serious pneumonia which progresses and can invade blood vessels, and coughing up blood is relatively common.”

He added mucormycosis has become a “serious complication of Covid-19”.

India declared it an epidemic in May when at least 11,000 patients had developed mucormycosis after recovering from Covid.

Now the figure is estimated at more than 28,000, with hundreds of deaths.