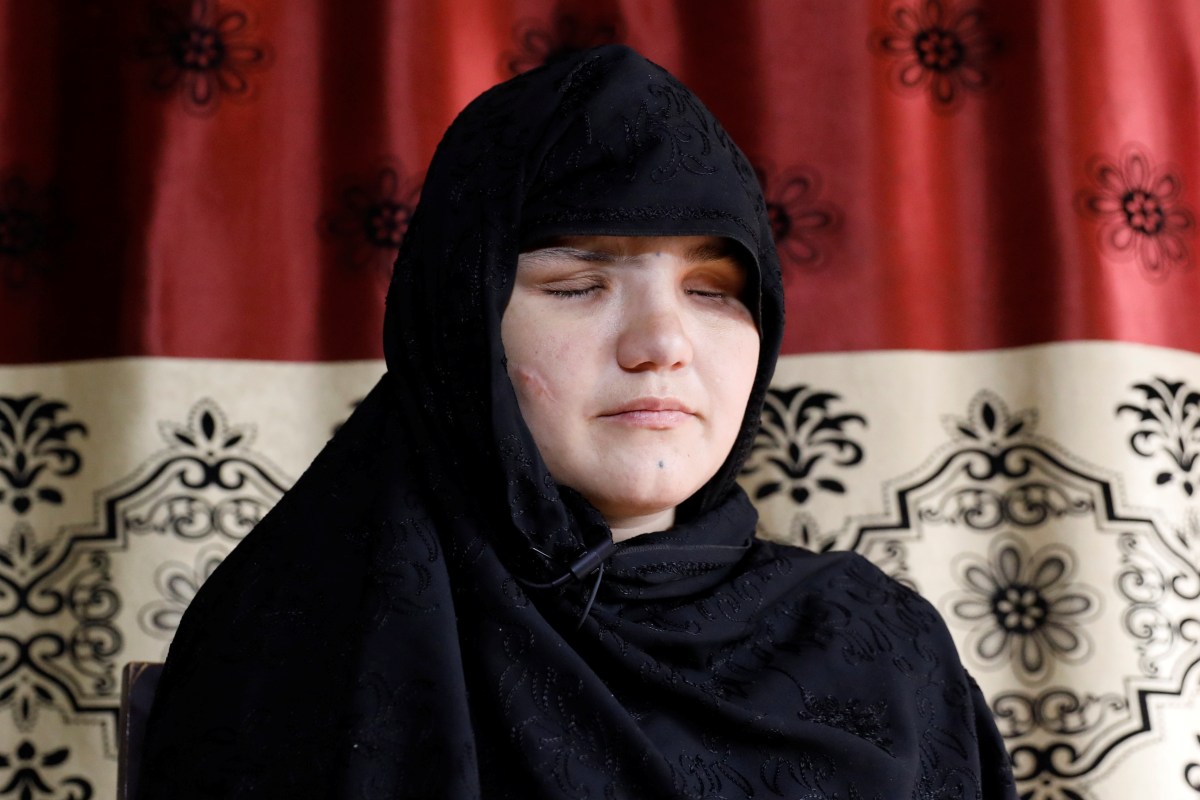 
A PREGNANT woman who had her eye gouged out by the Taliban after being shot eight times has told how the terror group “fed bodies to the dogs”.

Khatera was on her way home from work alone in the city of Ghazn when she was surrounded by three Tabiman militants who proceeded to open fire on her after checking her ID.

The 33-year-old, who was two months pregnant at the time of the brutal attack, was also knifed and had her eye gouged out.

She was rendered unconscious and left to die after the vicious assault.

The mum told News18 it was her father, a former Taliban fighter, who conspired the attack on her.

“They (the Taliban) first torture us (women) and then discard our bodies to show as specimen of punishment,” Khatera told the outlet.

“Sometimes our bodies are fed to dogs.

“I was lucky that I survived it.

“One has to live in Afghanistan under the Taliban to even imagine what hell has befallen on the women, children and minorities there.

“In the eyes of Taliban, women are not living, breathing human beings, but merely some meat and flesh to be battered.”

Khatera was able to move to Kabul and then Delhi to receive treatment, where she now lives with her husband and toddler – but fears what the future holds for women living in Afghanistan.

“The Taliban don’t allow women to visit male doctors, and at the same time, don’t let women study and work. So, then what is left for a woman? Left to die?” she added.

“Our women and the youth had come a long way in these 20 years to reach somewhere; to find a stable livelihood, to get proper education. Women were filling up universities.

“It was a beautiful sight to see girls going to schools. All went down the drain in just a week.

“I even heard from my relatives that families have begun burning the educational certificates of girls to protect them from the Taliban.”

Women and girls are believed to be some of the most at-risk under the new Taliban regime.

Khatera’s harrowing account comes after Taliban fighters reportedly marked the doors of prominent Afghan women with paint as several female anchors are axed from TV in a chilling crackdown.

‘WAITING TO BE KILLED’

Female journalists in Afghanistan are fearing for their lives and many have been “taken off air” as the Taliban’s reign of terror begins after the jihadi army seized Kabul.

Homira Rezai, who grew up in the war-torn country until she was 13 and now lives in Dudley, described how the militants were already drawing up lists of women to target for future punishments.

She told BBC Women’s Hour: “Just an hour ago, I received an update from Kabul where they are going house to house searching for women who were activists, women who were bloggers, YouTubers, any women who had a role in the development of civil society in Afghanistan.

“They are going door to door targeting those women and marking the doors with bright pink or bright-coloured paint to ensure ‘this is the house we need to come back to and do something about them’.”

And in a haunting sign of the brutality of the regime, Afghanistan’s first female mayor said she is now waiting for militants to come and kill her.

Zarifa Ghafari, 27, told i on Sunday: “I’m sitting here waiting for them to come. There is no one to help me or my family.

“I’m just sitting with them and my husband. And they will come for people like me and kill me. I can’t leave my family.”