Why are anti-vax lot still protesting? They’re dying too 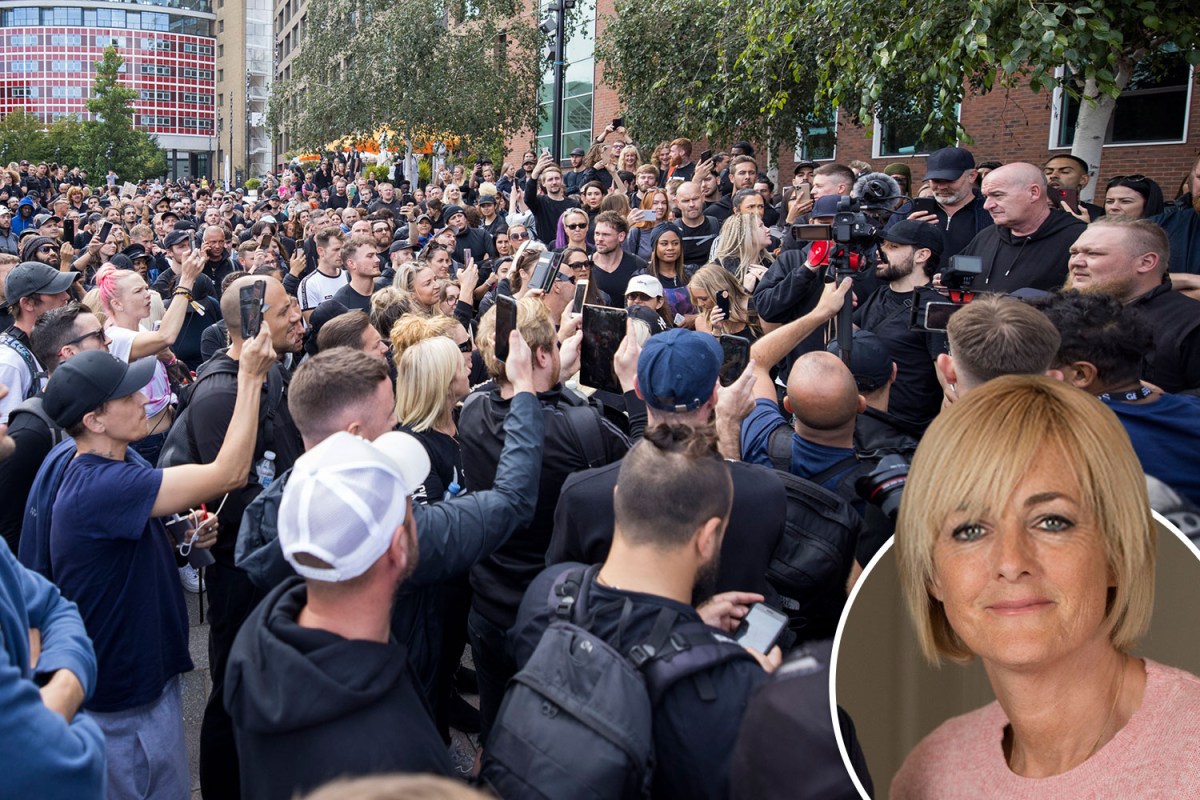 
ON Monday, I was live on ITV’s lunchtime show Loose Women when anti-vax protesters tried to storm Television Centre in West London.

We were talking about the menopause at the time, so we weren’t quite sure what we’d done to upset them, but it turns out they thought it was still home to BBC news when, in fact, the news team moved out eight years ago.

Doesn’t say much for their “research” skills, does it?

But anyway, there they were, trying to break down the front doors while a line of woefully under-equipped police officers bore the brunt of their geographically misdirected anger.

After coming off air, we spent another couple of hours locked in the studio for our own safety, peering through the doors as hundreds angrily protested about vaccines in general and Covid passports and jabs for children in particular.

One man claimed that the media was circulating “propaganda” about coronavirus, which he said wasn’t a severe threat.

Tell that to the family of anti-vax solicitor Leslie Lawrenson, who recently died of Covid just nine days after posting that the virus “was nothing to be afraid of”.

His unvaccinated partner Amanda Mitchell also got it but, after being admitted to hospital with pneumonia, she survived.

“I feel incredibly foolish. Les made a terrible mistake and he’s paid the ultimate price,” she says with admirable honesty.

Leslie’s death was followed by that of “super fit” John Eyers, 42, who refused to get the vaccine because he believed he would only suffer a mild illness.

“The only pre-existing health condition he had was a belief in his own mortality,” says his distraught twin sister Jenny McCann.

FALL IN A TRAP

Similarly, in the space of just one week, Cardiff-based Francis Goncalves lost both his unvaccinated parents to the virus, as well as his 40-year-old brother Shaul, who, he says, was very fit and “ate a wholefoods, plant-based diet”.

He adds: “They got caught up in a lot of the anti-vaccination propaganda that’s going around. It preys on people who are afraid and they fall into the trap.”

Then there’s anti-vaxxer David Parker, 56, who died of Covid last week after denouncing the vaccine as “experimental” and warning of a “big pharma” and media conspiracy.

He had no underlying health conditions.

Proof, if needed, that the virus remains a threat and no one knows how their body will react to it.

A close friend of Mr Parker’s said his devastated family are urging others to get vaccinated, but will those protesting outside Television Centre listen?

Or will they continue to take the gamble that, unlike those mentioned above, they won’t be seriously affected by the virus that has now claimed around 4.3million lives worldwide.

Science dolls will end up in glitter

THE latest batch of Barbie dolls have been modelled in honour of women working in the field of science and technology.

Professor Dame Sarah Gilbert, the British co-creator of the Astra Zeneca vaccine, is one of them.

“My wish is that my doll will show children careers they may not be aware of, like a vaccinologist,” she says.

Lovely thought, and let’s hope it comes to pass.

But Ms Gilbert, and all the other inspiring women now clutching plastic effigies of themselves looking suitably professional, must also accept that, at some point, their doll will end up plonked in a pink plastic jeep while dressed in a glittery leotard and neon leg warmers. Fact.

A NEW book about the exile of a famous royal couple in- cludes the following observations: “He is the spoiled child of success with the film-star mentality.

“He imagined he could quietly retire into private life, leaving his brother to perform the dreary ceremonial functions.

Not to mention making money out of his autobiography, flogging merchandise off the back of his royal connections, constantly jeopardising any rapprochement from his family and ghosting people who displeased him.

Is it a tome about the Duke and Duchess of Sussex?

Traitor King: The Scandalous Exile Of The Duke And Duchess Of Windsor, by Andrew Lownie, is about Edward Vlll, who abdicated his royal responsibilities in favour of marriage to the divorced Wallis Simpson.

As Winston Churchill once said: “Those who cannot learn from history are doomed to repeat it.”

SOOOOO many questions arising from the latest series of Love Island, where – for those not watching – participant Faye Winter (of discontent) has been screeching and cursing like a banshee over some imagined slight.

The biggest query of all being: What the hell does the delightfully calm Teddy Soares see in her?

But that aside, I see that the feisty 26-year-old with a penchant for Bart Simpsonesque foundation works as a lettings manager in Devon.

I’ll bet none of her tenants are brave enough to be late with their rent.

SINCE lockdown, the number of moth larvae eating their way through the carpets and clothing in stately homes has soared by a third.

George Bernard Shaw’s knickerbockers are a victim of these pointless pests, so too a tapestry that once belonged to Russian Empress Catherine the Great.

Less impressive, but no less annoying, the little blighters have laid their larvae in my wardrobe too.

And despite every last nook and cranny being stuffed with one of those sticky “moth deterrents”, they have still eaten a hole in my favourite cashmere jumper and, natch, it’s front centre.

So forget space travel – if Musk, Branson or Gates could divert their billions to inventing a moth obliterator, I’d be very grateful.

I’d have my old Moke

THE Mini Moke is being resurrected and updated.

Costing £24,000 and manufactured in Nuneaton, Warwicks, it will have power steering, waterproof seats and a heated windscreen.

What modern witchcraft is this?

As the proud former owner of an ex-army Mini Moke, the USP was always how basic (and therefore super-cool) it was.

It felt like driving a skip with wheels – not least because the interior was full of all my rubbish.

And as it didn’t have doors, winter trips required at least four coats, gloves and a rain hat because the flappy canvas roof leaked like a sieve.

But I loved it.

Would my memories be as fond had it been equipped with all mod cons?

IMAGINE landing in Mexico for your dream holiday, only to discover it’s suddenly been put on the red list and you have to pay £48squillion for a new flight home or end up in an airport hotel for ten days.

Unlike the churlish few whose response is always “It’s your own fault for going abroad” (what is wrong with these people?), I feel great sympathy for those caught up in the Government’s latest about-turn, not to mention the ailing travel industry that has to deal with the fallout.

One disgruntled holidaymaker “scrambling to get back” said: “I think it’s ridiculous.

“There’s no coherent reason, giving us that little notice.”

Much fairer, surely, to have introduced a policy that allows you to return to the UK under the same rules that were in place when you left?