What did Boris Johnson discuss in today’s Brexit talks? 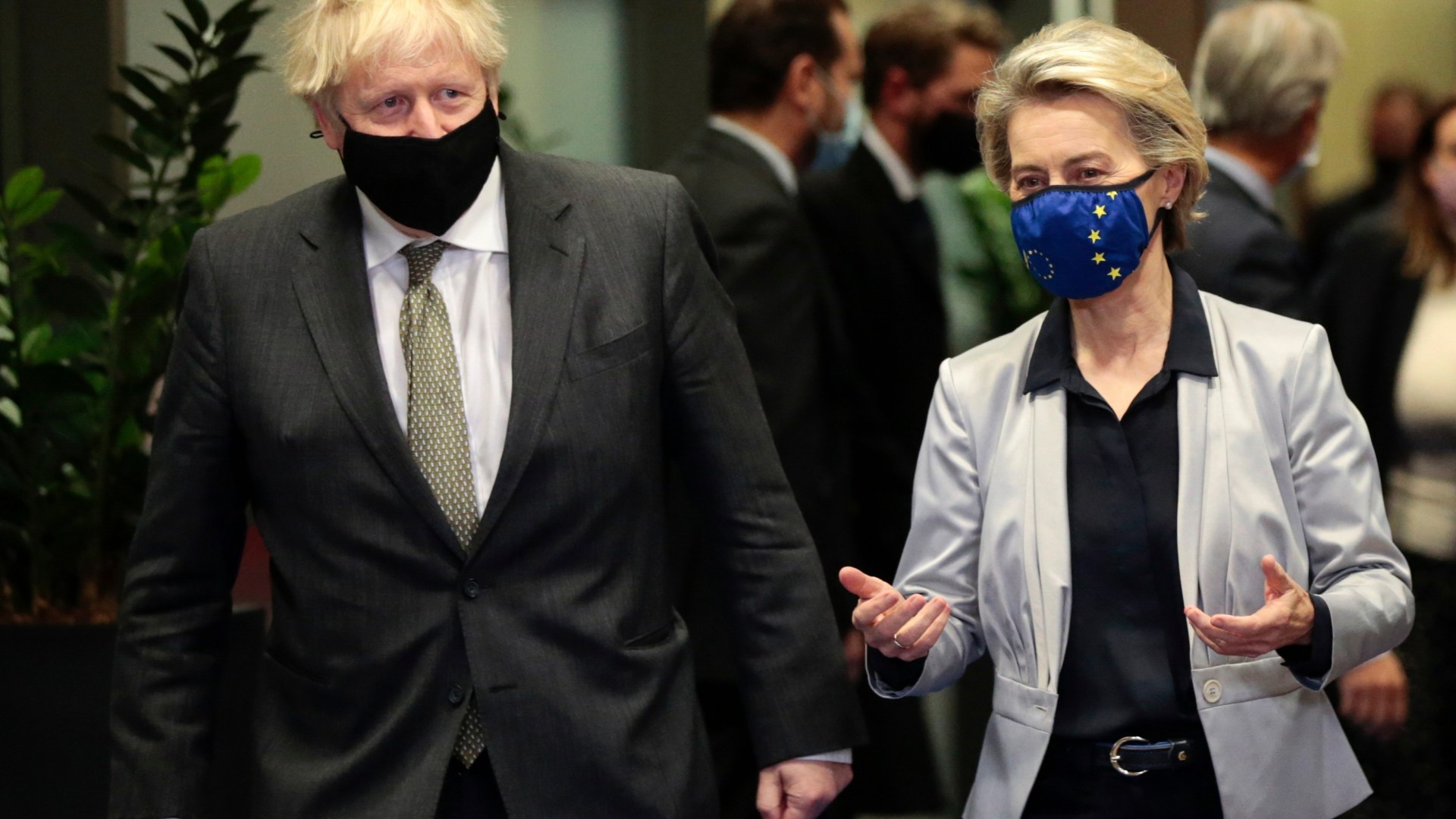 
DIVORCE talks on a post-Brexit trade deal aren’t dead in the water – for now.

What did Boris Johnson discuss in today’s Brexit talks?

Will Britain crash out with a No Trade deal or carry on talking through its tricky divorce from the powerful bloc?

Mr Johnson has held his Brexit showdown with the Brussels-born politician, and it appears that both sides have adopted a more convivial stance.

In a short statement to the media, Ms Von der Leyen said: “I had a constructive and useful phone call with PM Boris Johnson.

“We discussed the major unsolved topics.

“Our negotiation teams have been working day and night over the recent days.

“And despite the exhaustion after almost one year of negotiations, and despite the fact that deadlines have been missed over and over, we both think that it is responsible at this point in time to go the extra mile.

“We have accordingly mandated our negotiators to continue the task and to see whether an agreement can be reached even at this late stage.

“The negotiations continue here in Brussels.”

Prior to their discussion, government sources had warned the offer on the table from the EU is still “unacceptable” to the UK.

The country is still teetering on the edge of a no-deal Brexit that is predicted to cost jobs and force food prices to rise.

An impasse on arrangements that would guarantee Britain a zero-tariff and zero-quota access to the EU’s single market has yet to be resolved.

Both sides said on Friday that a ‘no-deal’ was now the most likely outcome.

However, Ireland’s leader said on Sunday that the two sides still have the capacity to reach an agreement in the stalled talks.

Negotiators met in Brussels on Saturday, December 12, and a government source said they would press on through the night.

But the talks were very difficult and “as things stand, the offer on the table from the EU remains unacceptable”, they added.

Early on Sunday, foreign minister Dominic Raab said there was much further to go.

“We want to be treated like any other independent self-respecting democracy.

“If the EU can accept that at a political level, then there’s every reason to be confident but there is still, I think, a long way to go,” he told Sky News.

Mr Raab refused to close the door on the possibility of the trade talks with the bloc continuing past the Sunday deadline.

The Cabinet minister said “never say never” and highlighted that negotiations with Brussels have a tendency to “drag and drift”.

The government fears Brits will start panic buying if the UK crashes out without a deal.

Retailers have also warned food prices could be hiked in the event of a No Deal.

Why have the Brexit talks broken down?

Negotiators Michel Barnier of the EU and Britain’s David Frost met just after dawn on Sunday to try to reach a middle ground.

So far, the UK hasn’t backed down from its insistence on trading with the 27-nation bloc with as few restraints as possible.

Meanwhile, the EU isn’t yielding on its demand to accept trade only if Britain respects the rules of the bloc.

After months of increasingly testy talks, there is no agreement on three topics: competition, the resolution of future disputes, and fishing rights.

Fishing is a symbolically important, though economically minor, issue.

For Brexit supporters, controlling the nation’s waters is essential.

Countries like France and Spain have powerful fishing lobbies that don’t want to lose the access they have now.

Plus, there are issues with the bloc’s demands that Britain face consequences if in the future it diverges from the bloc’s rules for fair competition – what it calls a level playing field.

What constitutes fair competition, and what happens it if is breached are tricky as the UK’s desire for freedom is at odds with the EU’s need to protect its unity.

This would result in it becoming a low-regulation economic rival on the bloc’s doorstep, so it is demanding strict “level playing field” guarantees as a condition of access to its vast single market.

But, the UK government sees Brexit as about sovereignty and “taking back control” of the country’s laws and borders.

It claims the EU is trying to bind Britain to the bloc’s rules indefinitely, rather than treating it as an independent nation.

France will have ZERO ACCESS to British waters if there is a No Deal Brexit, warns Raab