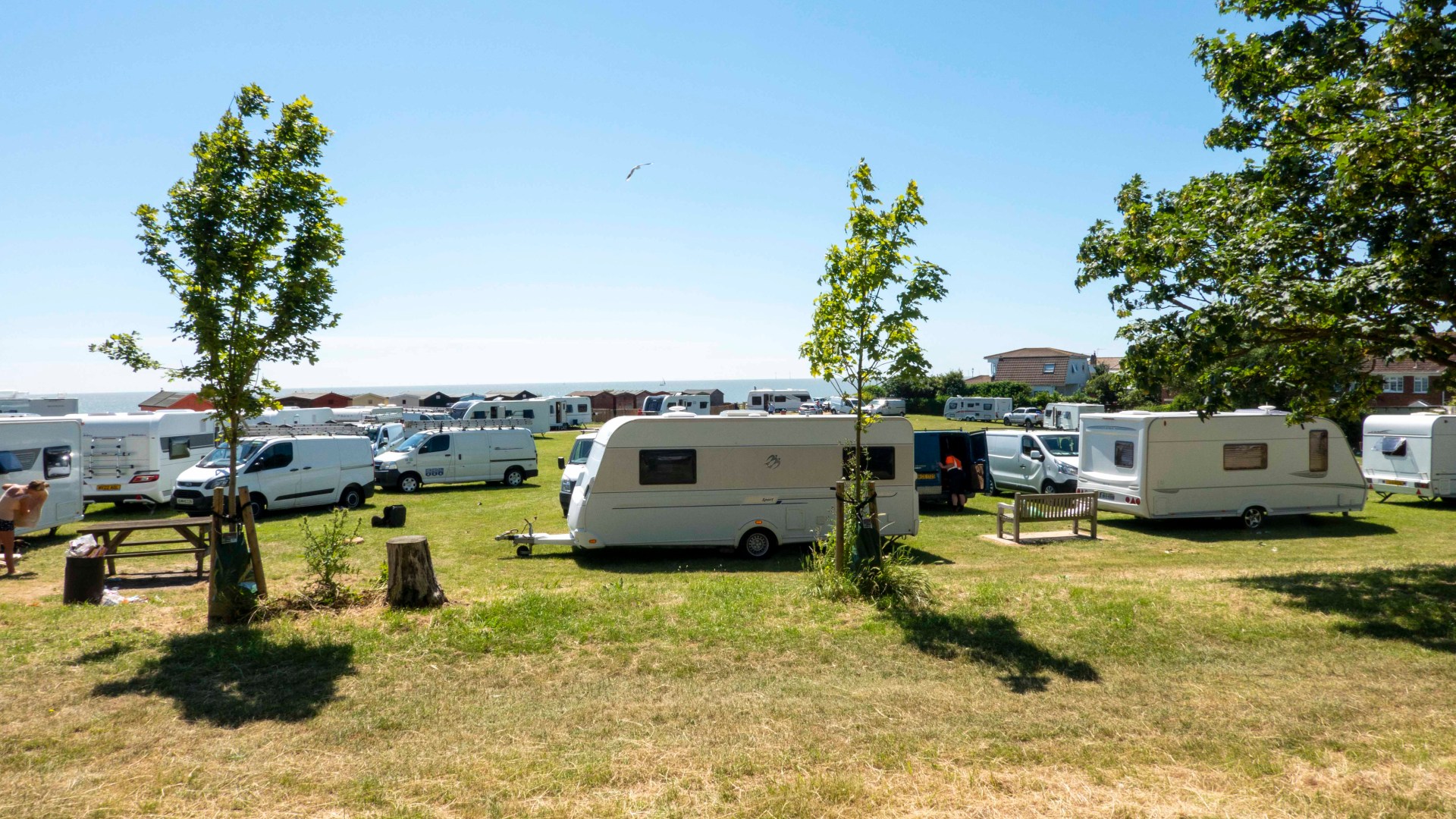 
A GROUP of travellers accused of causing mayhem at a beach in Essex have insisted they just like “living free”.

The group arrived for a holiday at Walton-on-the-Naze, Essex, on Sunday and set up their 15 caravans on a clifftop overlooking the sea.

Residents living nearby have since accused them of causing chaos, with one teen allegedly spotted throwing water over a topless sunbather.

Others told how kids were leaping on top of the beach huts, while noise blared out from generators.

But the travellers, who come from a number of families in Ireland, defended their lifestyle, insisting they just want to enjoy their summer break.

One man told UK Times: “We are here to enjoy the beach.

“We are on our holidays. It is a beautiful place.”

Asked why the group had not paid to go on a licensed caravan site with facilities, he added: “We just like living free. It’s our culture.”

The traveller said many in the group had earlier stayed for a week on Christchurch Park in the centre of nearby Ipswich, Suffolk.

They left Ipswich on Sunday evening and headed to Essex after being threatened with eviction by local council officials.

The man said: “The council were brilliant in Ipswich. They gave us loads of big bins to put rubbish in.

“When we left, they shook our hands because they could not believe how tidy the place was.

“We asked the council guys here to bring us some bins and bags to clear up, but they have not done anything.

“When we arrived there was a bin over flowing with rubbish. It is nothing to do with us, so we should not be getting the blame for it.”

Another said it was likely they would be evicted from the Essex beauty spot after Essex Police served them with a Section 61 notice requiring them to leave.

The decision is one likely to have been welcomes locals, many of whom moaned their green at Walton has become a recent target for travellers setting up camp.

Retired accounts clerk Pam Clark and her husband Alan, from Hertfordshire, said they saw one traveller boy from today’s group kicking sand from the promenade onto a woman sunbathing on her front on the beach below.

We think he was trying to get the woman to turn over and expose herself.

He then returned an hour later and splashed water on her from a bottle before staring down at her.

“We think he was trying to get the woman to turn over and expose herself.”

The woman sunbathing, who did not want to be named, said: “I was really relaxed and then this happened. I was very shocked. I work as a carer and this was my day off.”

Meanwhile, retired woodworking company owner Colin Seabrook, 81, said from outside his beach hut: “We don’t like it, but what can you do?

“It is a bit unnerving.

“The kids were running across the tops of the beach hunts earlier on.”

Teacher Lorraine Hopes, whose flat overlooks the green, added: “The yapping of their dogs running loose and the noise of their generators is annoying.

It is a bit unnerving. The kids were running across the tops of the beach hunts earlier on.

“There has been shouting and screaming, and music.”

Another resident, who asked not to be named, said: “They used to go up to as car park at a local visitor centre, but the council made that secure, so now they come here.

“I am annoyed because they have their own generators which make a racket until the early hours of the morning.

“I called the police to complain and was given an incident number, but nothing was done. I feel very intimidated. It makes me scared to leave my house.”

The Essex Countywide Traveller Unit which is run by Essex County Council and local district councils together with Essex Police visited the encampment on Monday and served Direction to Leave notices.

Staff from ECTU submitted an application on Tuesday for a first court date to start eviction proceedings.

A Section 61 notice was then served this morning by Essex Police, with the requirement that the caravans be removed today.

A Tendring District Council spokesman said: “We always work promptly, with the Essex Countywide Traveller Unit (ECTU), to move on unauthorised encampments as swiftly as the process allows.”

An Essex Countywide Traveller Unit (ECTU) spokesperson said: “The ECTU is managing this encampment on behalf of Tendring District Council.

“The ECTU has applied for a court hearing date to reclaim the land within the quickest timeframe available.”

Tendring Council later contacted the Sun to say the travellers had left the site.