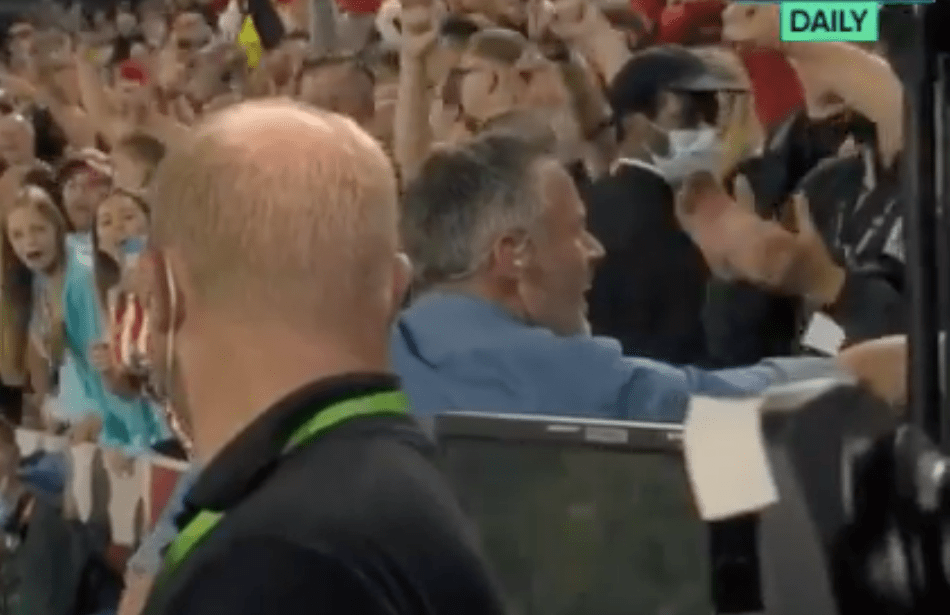 
BUZZING Jamie Carragher left his Sky Sports post to join the Brentford crowd in ‘Hey Jude’ chants after their stunning win over Arsenal.

The Bees kicked off their first ever Premier League campaign in style as they embarrassed the Gunners 2-0.

With fans back in full attendance, the 17,000 inside the Brentford Community Stadium were full of noise.

And as they belted out Beatles classic Hey Jude, Carragher couldn’t help but get involved and carried his mic into the crowd to join in.

Brentford got themselves off to the perfect start on 22 minutes as Spaniard Sergi Canos opened the scoring.

He cut into the box from the left, nutmegged Calum Chambers and beat keeper Bernd Leno at his near post.

Arsenal had their moments in the second half, but again calamitous defending let them down.

The Gunners conceded a throw in on 73 minutes and failed to deal with the ball coming into the box.

They let it bounced from the long throw-in, and midfielder Christian Norgaard was on hand to head home.

Former Premier League winner Gary Neville said: “We knew what Brentford were going to be. It was as if Arsenal didn’t.”

Carragher also added: “There will be a lot of negativity around Arsenal on the back of this game.”