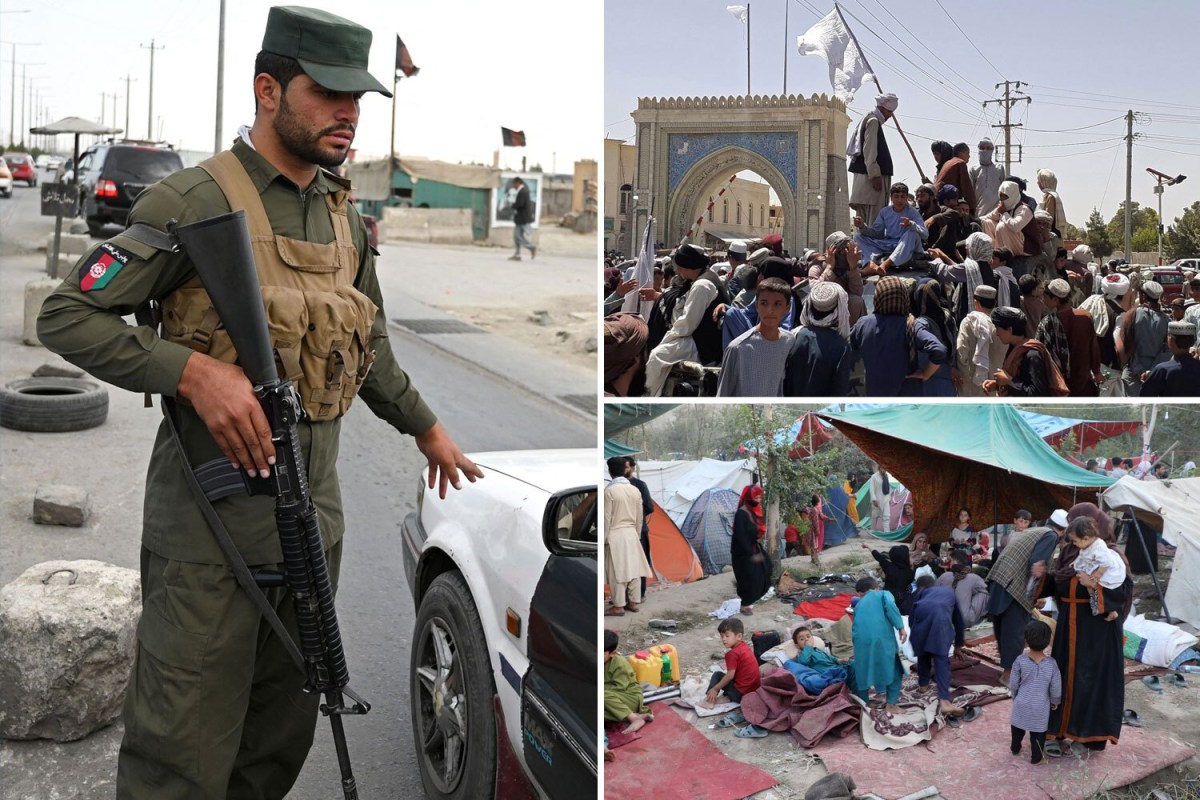 
THE first Marines have arrived in Afghanistan as the Taliban continue their relentless march across the country and close in on the capital Kabul.

Marines from a contingent of 3,000 arrived Friday in a bid to halt the advance of the terror group.

The US Air Force has carried out several airstrikes to aid its Afghan allies on the ground but they appear to have done little to stem the Taliban’s advance.

A B-52 bomber and other warplanes traversed the country’s airspace Saturday, flight-tracking data showed.

Meanwhile, the Taliban seized two more provinces Saturday and approached the outskirts of Afghanistan’s capital while also launching a multipronged assault on a major northern city defended by former warlords.

The insurgents have captured much of northern, western and southern Afghanistan in a breakneck offensive less than three weeks before the US. is set to withdraw its last troops, raising fears of a full militant takeover or another Afghan civil war.

The Taliban captured all of Logar province, just south of the capital, Kabul, and detained local officials, said Hoda Ahmadi, a lawmaker from the province. She said the Taliban have reached the Char Asyab district, just 7 miles south of Kabul.

The insurgents also captured the capital of Paktika, bordering Pakistan, according to Khalid Asad, a lawmaker from the province. He said fighting broke out in Sharana early Saturday but ended after local elders intervened to negotiate a pullout. He said the governor and other officials surrendered and were on their way to Kabul.

Sayed Hussan Gerdezi, a lawmaker from the neighboring Paktia province, said the Taliban seized most of its local capital, Gardez, but that battles with government forces were still underway. The Taliban said they controlled the city.

The Taliban meanwhile attacked the northern city of Mazar-e-Sharif from several directions, setting off heavy fighting on its outskirts, according to Munir Ahmad Farhad, a spokesman for the provincial governor.

The Taliban have made major advances in recent days, including capturing Herat and Kandahar, the country’s second- and third-largest cities.

They now control 19 of Afghanistan’s 34 provinces, leaving the Western-backed government with a smattering of provinces in the center and east, as well as Kabul and Mazar-e-Sharif.

He vowed not to give up the “achievements” of the 20 years since the US toppled the Taliban after the 9/11 attacks.

The US has continued holding peace talks between the government and the Taliban in Qatar this week, and the international community has warned that a Taliban government brought about by force would be shunned.

But the insurgents appear to have little interest in making concessions as they rack up victories on the battlefield.

“We have started consultations, inside the government with elders and political leaders, representatives of different levels of the community as well as our international allies,” Ghani said. “Soon the results will be shared with you,” he added, without elaborating further.

The president had flown to Mazar-e-Sharif on Wednesday to rally the city’s defenses, meeting with several militia commanders, including Abdul Rashid Dostum and Ata Mohammad Noor, who command thousands of fighters.

They remain allied with the government, but during previous rounds of fighting in Afghanistan, warlords have been known to switch sides for their own survival.

Ismail Khan, a powerful former warlord who had tried to defend Herat, was captured by the Taliban when the insurgents seized the western city after two weeks of heavy fighting.

Tens of thousands of Afghans have fled their homes, with many fearing a return to the Taliban’s oppressive rule.

The group had previously governed Afghanistan under a harsh version of Islamic law in which women were forbidden to work or attend school, and could not leave their homes without a male relative accompanying them.

Salima Mazari, one of the few female district governors in the country, said she has never even considered surrendering.

“There will be no place for women,” said Mazari, who governs a district of 36,000 people near Mazar-e-Sharif. “In the provinces controlled by the Taliban, no women exist there anymore, not even in the cities. They are all imprisoned in their homes.”

The withdrawal of foreign troops and the swift collapse of Afghanistan’s own forces — despite hundreds of billions of dollars in U.S. aid over the years — has raised fears the Taliban could return to power or that the country could be shattered by factional fighting, as it was after the Soviet withdrawal in 1989. It’s also prompted many American and Afghan veterans of the conflict to question whether two decades of blood and treasure was worth it.

Afghans have been streaming into Kabul’s international airport in recent days, desperate to fly out, even as more American troops have arrived to help partially evacuate the U.S. Embassy.

The Taliban meanwhile released a video announcing the takeover of the main radio station in the southern city of Kandahar, which fell to the insurgents earlier this week, renaming it the Voice of Sharia, or Islamic law.

In the video, an unnamed insurgent said all employees were present and would broadcast news, political analysis and recitations of the Quran, the Islamic holy book. It appears the station will no longer play music. It was not clear if the Taliban had purged the previous employees or allowed them to return to work.

The Taliban have used mobile radio stations over the years but have not operated a station inside a major city since they ruled the country from 1996 to 2001. At that time, they also ran a station called Voice of Sharia out of Kandahar, the birthplace of the group. Music was banned.

Senate Minority Leader Mitch McConnell said on Friday that the United States should start carrying out air strikes against the Taliban, after the insurgent group took control of a number of Afghan cities and began to encircle Kabul.

With Kabul still under the control of US-backed Afghan forces, McConnell said in a statement “it is not too late to prevent the Taliban from overrunning Kabul.

“The Administration should move quickly to hammer Taliban advances with air strikes, provide critical support to the Afghan National Defense and Security Forces (ANDSF) defending the capital, and prevent the seemingly imminent fall of the city.”

Over recent days, Republicans have criticizes President Biden’s handling of the decision to withdraw troops from Afghanistan.

Biden has set August 31 as the date U.S. forces will exit the country, but on Friday he ordered the “temporary” deployment of 3,000 troops to Afghanistan to help evacuate Americans from the US embassy in Kabul.

According to the Associated Press, the Taliban currently controls 14 of the country’s 34 provincial capitals, with cities such as Kandahar and Herat being captured last week.

The president, however, has rejected criticism of the decision to withdraw.

Biden rejected that a Taliban takeover was inevitable, adding: “The Taliban is not the North Vietnamese Army. They’re not remotely comparable in terms of capability.

“There’s going to be no circumstances where you’re going to see people being lifted off the roof of an embassy in the United States from Afghanistan.”

Earlier this week, Biden discussed the amount of money the U.S. has spent in Afghanistan – a total that includes an estimated $81 billion in arming U.S.-backed Afghan forces.

Biden said on Tuesday: “We spent over $1 trillion over 20 years. We trained and equipped with modern equipment over 300,000 Afghan forces.

“And Afghan leaders have to come together. We lost thousands, we lost to death and injury, thousands of American personnel. They’ve got to fight for themselves, fight for their nation.”

The president is currently taking a long weekend at Camp David – a move that also riled many Republican lawmakers, who said Biden should not be disappearing from public view during such developments in the Middle East.

As the Taliban rampages across the country, some of its most brutalised victims have been the country’s women.

Women were brutally oppressed when then the militant group last controlled Afghanistan in the 90s.