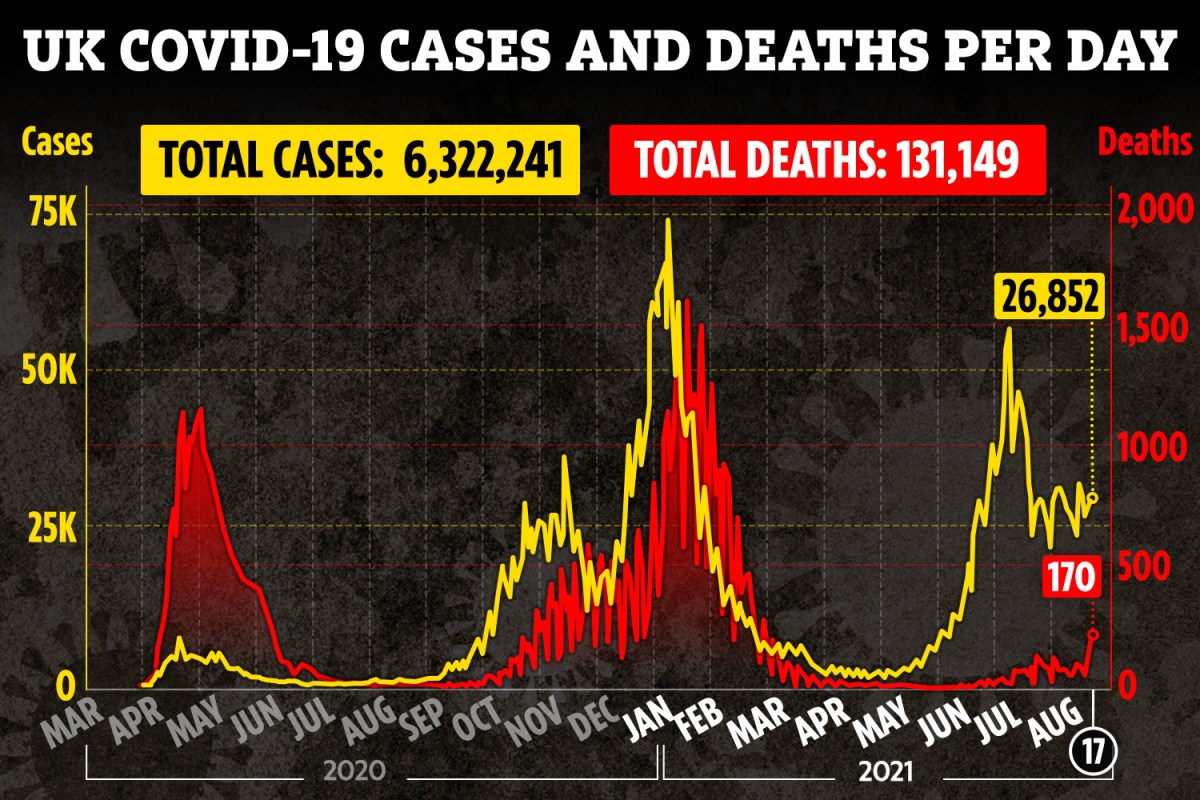 
DAILY UK Covid deaths are at their highest in five months with 170 fresh fatalities recorded in the past 24 hours.

The latest figures bring the UK’s coronavirus death toll to a grim 131,149.

The last time more than 170 deaths were recorded in a day was March 12 when 175 lost their lives.

It is also a huge increase on yesterday’s 26 and a small rise on last week’s 146.

A further 26,852 new cases were also recorded, making the total number of infections since the pandemic began 6,322,241.

It comes as experts warn a new Covid wave could hit as schools and office workers return next month.

Scientists fear case and hospitalisation rates will soar into September, based on the current trends.

Professor Neil Ferguson, a scientific government adviser, told the Today programme on BBC Radio 4: “Numbers have basically plateaued at this time and are really quite high, about 30,000 cases a day.

“That’s a slightly sobering situation coming into September because our contact rates are at half the levels and we will be opening schools going back into offices.

“So we have the potential for quite a large wave going into September/October.”

After a dramatic fall from mid-July, cases are now on an upward slope yet again.

Prof Ferguson warned the UK could still see 100,000 daily Covid cases this autumn, higher than the record 81,500 reported on December 29.

This could lead to 1,000 hospitalisations per day, up from the 880 currently, he warned.

But this is significantly lower than the record 4,600 on January 12.

Prof Ferguson added it is “unlikely” that any surge in hospital admissions will lead to levels of deaths seen before thanks to the vaccination programme.

A whopping 88,211,389 Covid vaccine doses have been administered across the UK.

The Moderna jab – one of the three offered in the UK – has been given the green light for kids aged 12 to 17 by Britain’s drug regulation agency.

The regulator said it’s now up to the Joint Committee on Vaccination and Immunisation (JCVI) to advise the Government on the next step.

They will have to then decide if children in the UK in this age group can get the Moderna shot.

At the moment, only a select group of vulnerable children over 12 can get the vaccine.

And those aged 16 and 17 have only recently been allowed to book in for one shot of the life-saving jab.