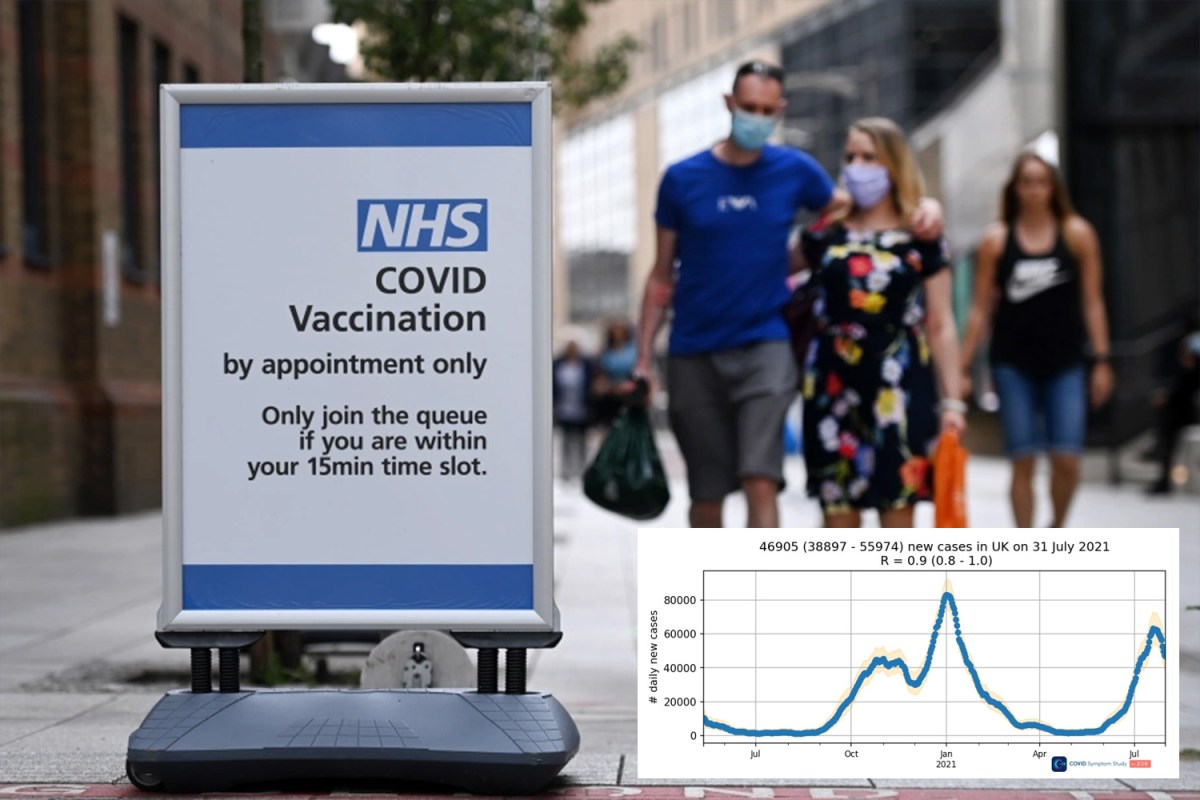 
THE UK is now past the peak of the third wave, promising new data has shown today.

After a rapid rise in cases as Delta spread, and a sudden decline in the past few weeks, Britain appears to be on the way back to calmer Covid waters.

New figures from the ZOE Covid Study app show a significant downturn from the peak seen last month, in the most recent data from five days ago.

Dr Claire Steves, lead scientist and Reader at King’s College London, said: “According to the latest ZOE incidence figures, the number of new daily cases in the UK has finally begun to fall, with a UK R value around 0.9.

“This is the good news the UK has been waiting for but, we mustn’t get ahead of ourselves, this pandemic definitely isn’t over yet as cases remain very high.”

According to the latest data from the app, there are currently about 46,905 new daily symptomatic cases in the UK. This is a drop from 60,271 new cases last week.

The latest government figures show 38,733,334  people in the UK have received two doses of a Covid vaccine.

It is thought the peak of cases were around July 29, according to Zoe’s data, and has been falling since.

Dr Steves said jabbing children over 12 could prove helpful in the battle against the bug, after the JCVI approved vaccinated teens aged 16 and 17 yesterday.

She said: “Take the example of Scotland, where cases have been falling for weeks. Scotland’s schools broke up for summer much earlier than in England and the holidays provide a much-needed break from the daily mixing of children and parents.

“This could suggest that vaccinating children over 12 years old this summer could help to prevent another wave and stop the spread of the virus in autumn.

“We’ll be keeping a close eye on what happens later this year when all schools go back again.”

The Covid-19 vaccine rollout in England is estimated to have directly averted more than 66,900 hospital admissions, according to new figures from Public Health England.

Previous estimates had put the figure at more than 52,600 admissions.

Cases of Covid in all regions of England are also continuing to fall, the data said.

All age groups are also seeing a drop in infections, although 20-29 year olds are still suffering the most.

It comes after another expert said on Monday he thought Britain could now be “over the edge” of the third wave.

Jamie Jenkins, former head of health statistics at the Office for National Statistics, told LBC cases have been falling since July 19.

He said: “I think looking at the data, we normally see deaths peaking around 14 days after cases come down, I think we might start being over the hill now when it comes to deaths.”

Mr Jenkins added: “We probably are over the edge of the wave at the moment but let’s have a bit of caution as we go into the autumn period.”

The expert explained: “The vaccine effect has kicked in as well – if you look at the same number of cases to what we had in the winter, it would have been 800 deaths rather than 65-70.”

Britain’s successful jabs roll-out has been heralded for breaking the link between infections and severe illness.