The unwanted records, the most hat-tricks and the 7.69-second goal… the best Premier League stats ahead of new season 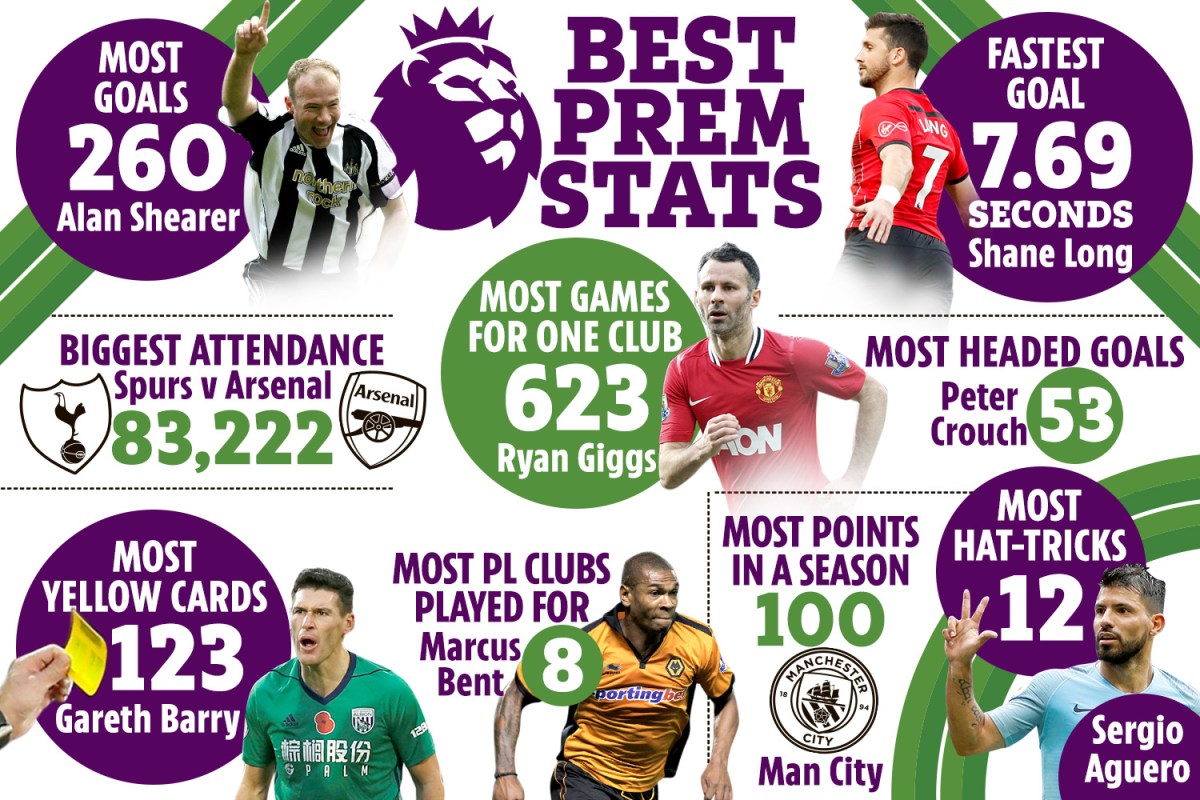 
THE new Premier League season is finally upon as Arsenal travel to newly-promoted Brentford tonight.

We are guaranteed plenty of belting goals, woeful misses, super saves and plenty of drama in front of packed crowds – and some VAR controversy sprinkled in too, of course.

But it will also be a season with records smashed left, right and centre as the best league in the world gets going again.

However, a fair few are unlikely to get changed this season.

Shane Long holds the gold medal for the fastest Premier League goal, scoring for Southampton against Watford in April 2019 after just 7.69 SECONDS.

Alan Shearer’s 260-goal haul looks safe at least for this season, as does Sergio Aguero’s 184 for one club in the competition’s history.

The Argentine, who left Manchester City for Barcelona this summer, also has the most hat-tricks on 12, with Harry Kane (eight) and Raheem Sterling (four) his closest active rivals.

Gareth Barry’s tallies of 123 yellow cards in 653 appearances are both top of the pile, although Ryan Giggs has the most games for a single club (632) and assists (162).

Petr Cech will remain the goalkeeper with the most clean sheets with 202 until the 2023-24 season at the very earliest – even if David De Gea keeps 38 clean sheets for the next two years, he will still be behind.

And it would take something pretty spectacular for the latest goal (101m 48s by Dirk Kuyt), Manchester City’s 100-point tally or Peter Crouch’s 53 headed goals to be topped either.

Marcus Bent remains the player to have played for the most Premier League clubs with eight while the highest attendance is the 83,222 who packed into Wembley for Spurs vs Arsenal in February 2018.

Among the records set to be updated, though, are the most wins and goals by one club, assuming Manchester United add to their respective tallies of 687 and 1,415.

Everton boast the less-than-glamorous double of the most draws (314) and most goals conceded (1,415).

The Toffees are also at risk of adding the most defeats title to their collection – they are currently on 393 with West Ham holding the record on 394.

James Milner may well add to his tally of 161 substitute appearances with Theo Walcott the player subbed off the most times on 152.

Lastly, Aymeric Laporte will want to improve on his 83 per cent Premier League win rate, the highest of anyone to play a minimum of 50 matches.