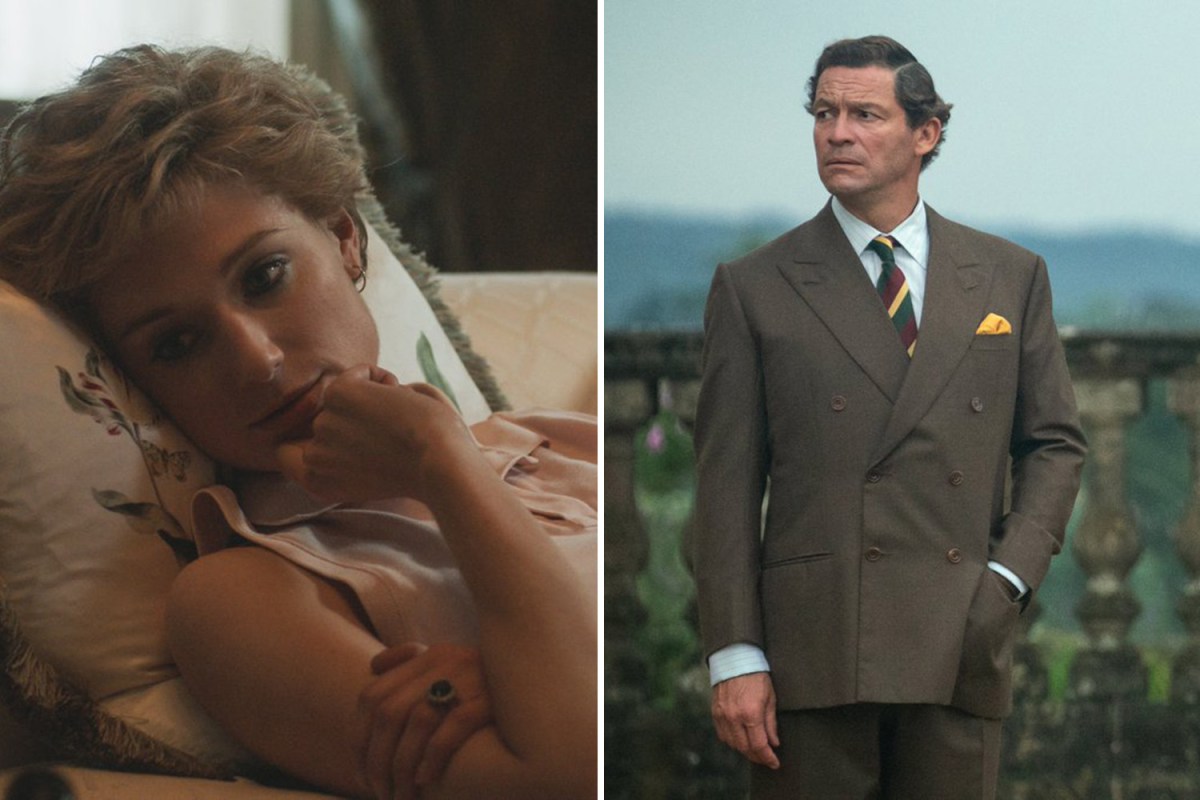 
THE Crown has released the first look image of Dominic West and Elizabeth Debicki as the Prince and Princess of Wales.

It sees the troubled couple at the height of their global fame in the Nineties, which is when the Netflix show resumes the story of the royal family.

The Night Manager star Elizabeth, 30, was announced as the new Princess Di last year and takes over the role from Emma Corrin, 25, who was introduced in the last series.

She’ll be joined in the new series by The Wire star Dominic, 51, whose role as the heir to the throne was previously portrayed by Josh O’Connor, 31.

The new images show the lengths which the drama’s creators have gone to in nailing the distinctive look of Charles and Diana during this period.

A TV insider said: “The images show Diana as she became increasingly self aware and comfortable with her own image.

“As she enters the Nineties she has shorter, sexier hair and her distinctive black eyeliner as well as clothes which showed off her svelte physique.

“But the prominence of her blue sapphire engagement ring in the photos is a reminder that despite her growing independence, she’s still tied to the royal family.

“As her star is rising, Prince Charles’s youthful looks are seen fading, with a fuller frame, greying hair and an increasingly stuffy wardrobe.

“The new Netflix image also sees him with a trademark hand in his suit pocket, looking bewildered as he surveys his home on the Highgrove Estate.”

The Sun exclusively revealed last year that he’d been offered the key role by Netflix bosses and was desperately trying to fit it into his hectic schedule.

Together Dominic and Elizabeth will cover the period from 1990 up to the lates Nineties when Diana died, aged just 36, in the Paris car crash and sent the royal family into a crisis.

The released of the image comes just two weeks after Netflix released the first look image of Imelda Staunton as a silver-haired The Queen during the darkest decade of her reign.

Imelda, 65, is the third actress to take on the role after Claire Foy in seasons one and two and Olivia Colman in three and four. She will play Her Majesty in the penultimate and final series of the drama which follows her turbulent life as head of state.

Filming on series five has started this month and covers the most traumatic years of her life, with the separation of her two sons from their wives and the great fire at Windsor Castle.

The Sun revealed two years ago how the sought-after role was going to Imelda – who is married to Downton Abbey star Jim Carter, 72, who played butler Mr Carson in the ITV period drama.

Imelda is also resuming her role as Maud Bagshaw in the second Downton movie alongside Dominic in an as-yet-unknown part.

She also played Dolores Umbridge in two of the Harry Potter movies and was nominated for a Best Actress Oscar for playing the leading role in MIke liegh film, Vera Drake.

Claire, 37, was widely acclaimed as the young Princess Elizabeth, who was later crowned Queen, while Olivia Colman, 47, received more mixed reviews as the middle-aged monarch.

But news that Imelda would be playing the Queen in the Crown was widely praised when it was confirmed by Netflix.

Jonathan Pryce, 74, will play the queen’s husband, the late Prince Philip in the final two series – but the actors playing other senior royals have yet to be announced.

The Crown seasons 1-4 are available on Netflix now.

Looking for a new Netflix series to binge or the best movies to watch on Amazon Prime? We have you covered…