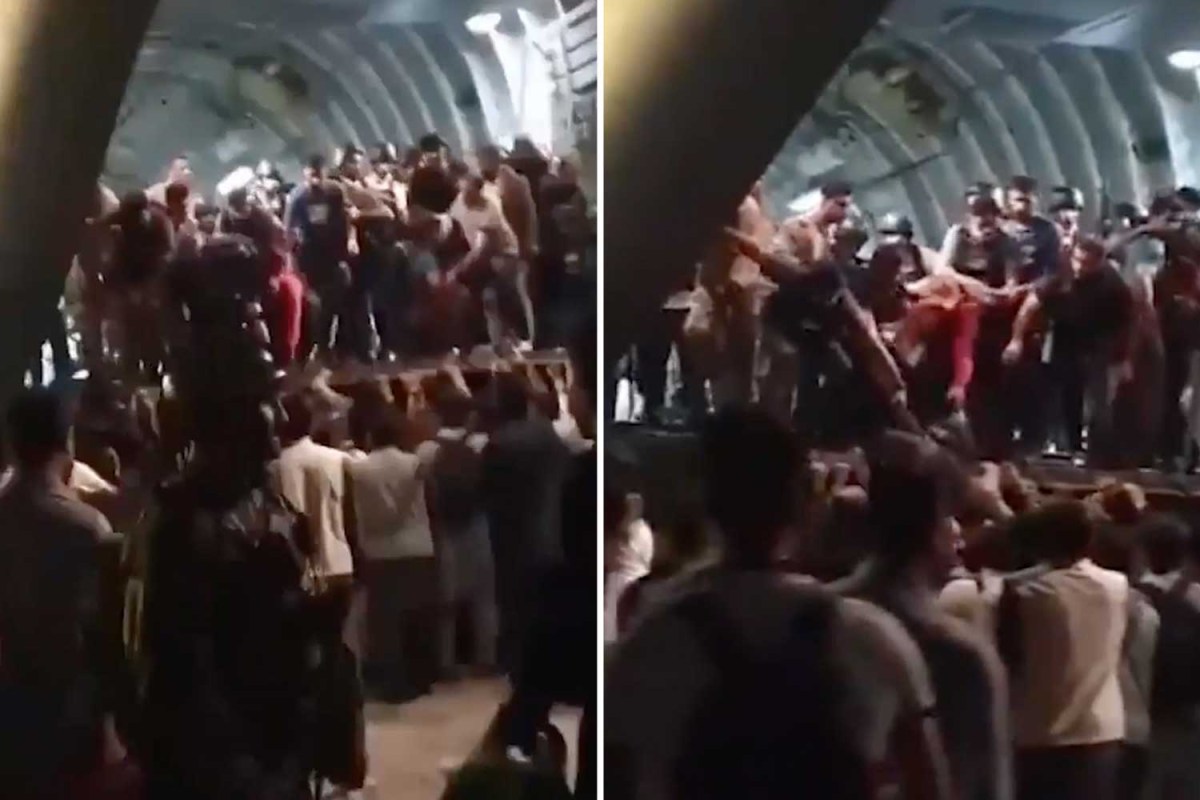 
THIS is the moment terrified crowds hauled each other onto a plane to escape Taliban fighters storming Kabul.

In scenes echoing the sudden fall of Saigon at the end of the Vietnam war, petrified men and women were filmed climbing on to what is thought to be a US Air Force craft while the ramp was being raised.

The clip shows what are apparently US embassy staff attempting to flee the country from the capital of Afghanistan which has fallen into the Taliban’s clutches.

Meanwhile over a thousand citizens have attempted to board a KamAir flight to Istanbul which can only carry 300 passengers.

Footage shows people pushing and shoving as they make their way through the overpacked aisle of the plane which is already over capacity.

Babies are heard crying as the plane falls dark with men shouting and arguing while they attempt to get a seat.

On social media locals have claimed that the airport has now fallen into chaos, with no security to try and retain order.

It comes as NATO this evening revealed that all commercial flights are now suspended from Kabul airport.

According to Reuters, only military aircrafts will now be allowed to operate.

Boris Johnson is today chairing an emergency Cobra meeting and recalled MPs to Parliament to tackle the crisis.

The speed of their victory has shaken the world and came just weeks after troops from the US, UK and other Nato countries left Afghanistan.

Ghani left Kabul for Tajikistan only 24 hours after he addressed the nation and said he hoped to fight on – but the speed of the Taliban advance left him no option but to flee.

They had demanded his removal as part of talks to ensure a peaceful transition of power when they reached Kabul to avoid an all out assault on the capital.

In scenes that echoed the fall of Saigon at the end of the Vietnam War, helicopters were seen ferrying US embassy staff to safety at a secure area near the airport.

The US Ambassador left in the early evening with the American flag to a new site at the airport.

Britain’s ambassador Sir Laurie Bristow remains in Kabul as him and remaining diplomatic staff prepare to be evacuated.

Paras from the 16 Air Assault Brigade have begun deploying to evacuate Brits from the city as well as about 2000 Afghan nationals who worked with British forces.

Boris Johnson has held an emergency Cobra meeting and will recall MPs to Parliament this week to tackle the Afghanistan crisis.

Kabul airport is to remain open for foreigners to leave, the Taliban said, and flights were continuing to operate.

Terrified residents have already begun fleeing in their cars leading to traffic jams, with a huge number of people now massing at the country’s borders.

The Taliban appeared to offer an amnesty for government forces and said they want a “peaceful transfer of power”.

When the Taliban last entered Kabul in 1996 after first seizing power, they tortured a former President then dragged him into the streets and hanged him.

Tugendhat told BBC News that Afghans who helped the British now faced reprisals if they fell into the hands of the Taliban.

“This isn’t just about interpreters or guards,” he said.

“This is about those people who we trained in special forces to serve alongside us, those who helped us to understand the territory through our agencies and our diplomats.

“This is the people who, on our encouragement, set up schools for girls. These people are all at risk now.

“We have politically chosen to be defeated by the Taliban and we have to accept that,” he told Sky News.

“Personally I think it’s shameful. It’s out of keeping with our values and our principles.

“I never thought I’d see the day either as a serviceman or as a member of the Conservative Party where we would essentially surrender to the Taliban and leave these people to their fate.”

Mercer also questioned why the UK has followed the US lead in leaving the country.

“We don’t pour 40 billion pounds a year into a defence budget in order to not leave the gates or be able to do anything without the Americans,” he said.

Already people in Afghanistan are adjusting to the Taliban’s extreme interpretation of Islam.

Adverts depicting women’s faces were pictured being painted over and others were reportedly being torn down.

Chillingly a spokesman said barbaric punishments such as stonings, amputations and executions are “up to courts”.

Afghan Hamidullah Abawi told The Sun on Sunday that refugees were swelling Kabul.

Abawi – who works for the education charity Street Child – said: “It’s chaotic here, there is no hope left. People are rushing to take their money out of the banks.”

More than 4,000 desperate UK nationals are waiting for a last-ditch airlift.

Whitehall insiders revealed a plan was being drawn up to operate a 770-mile military “shuttle” service to reach the haven of Dubai if commercial airlines become unviable.

The deployment of 600 troops, including members of 16 Air Assault Brigade, began at the weekend as part of Operation Pitting, which aims to relocate Brits and Afghans facing Taliban reprisals for helping our forces.

British troops have been warned they could be drawn into face-to-face fighting with the Taliban.

They face the challenge of securing the airhead base at Kabul airport and making sure desperate-to-leave Afghans cannot get access to the evacuating aircraft.

Radar to track and trace any in-direct Taliban fire such as mortars, rockets and artillery will also be deployed.

But one Whitehall source told The Sunday Times that the airport “will not hold for more than a few days”.

Mazar-e-Sharif, the capital of Balkh province, and the country’s fourth largest city fell on Saturday night.