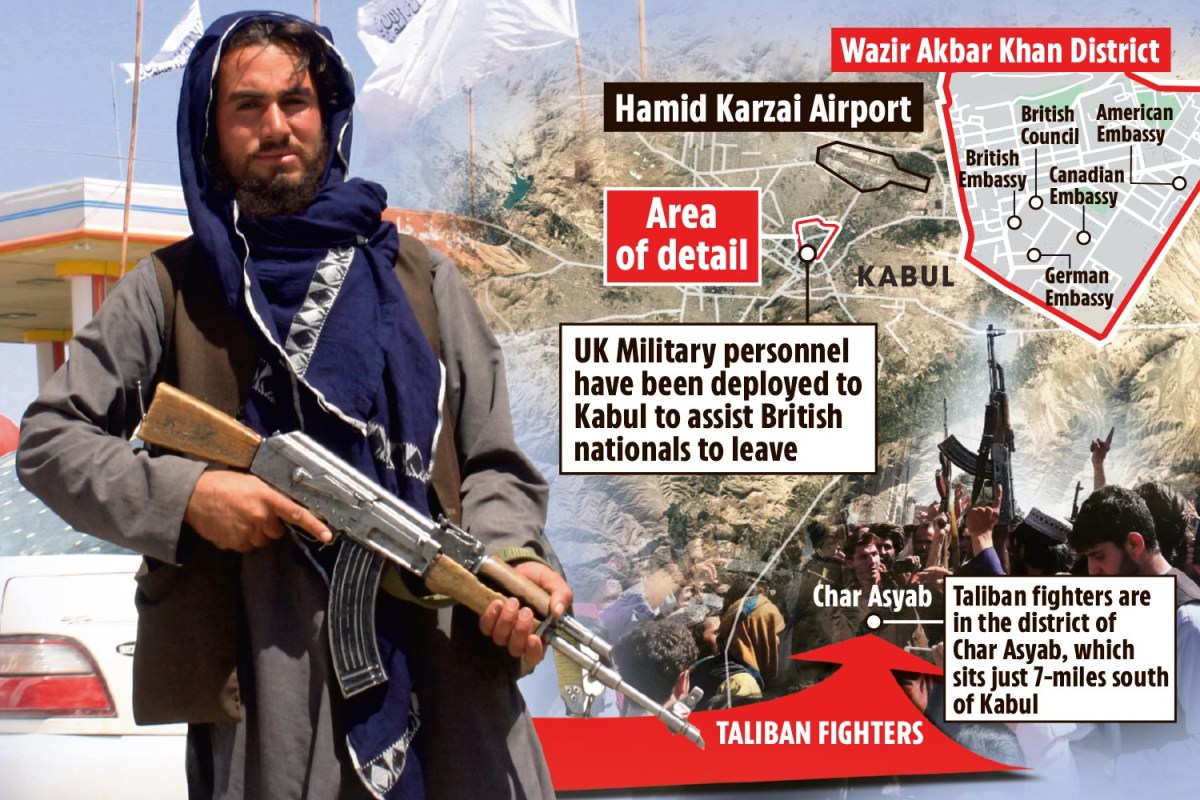 
THE Taliban have taken over Jalalabad today and are set to storm Kabul as UK troops prepare for a firefight to evacuate Brits from Afghanistan.

An Afghan official said the key eastern city was taken by the Taliban early this morning.

The local governor surrendered said it was “the only way to save civilian lives”.

Jalalabad is 80 miles from the Afghan capital Kabul – the last major city not under Taliban control.

It comes after Taliban fighters moved to within seven miles of Kabul yesterday as UK troops faced a race against time to evacuate Brits from the war-torn country.

More than 4,000 desperate UK nationals waited for a last-ditch airlift.

Whitehall insiders last night revealed a plan was being drawn up to operate a 770-mile military “shuttle” service to reach the haven of Dubai if commercial airlines become unviable.

The deployments of 600 troops, including members of 16 Air Assault Brigade, began this weekend as part of Operation Pitting, which aims to relocate Brits and Afghans facing Taliban reprisals for helping our forces.

But last night it emerged that Britain is to abandon its diplomatic presence in Afghanistan as senior government sources said ambassador Sir Laurie Bristow and staff will join the evacuation.

British troops have been warned they could be drawn into face-to-face fighting with the Taliban.

They were briefed about a series of threats ranging from roadside bombs to suicide bombers and drone attacks. SAS soldiers will link up with interpreters to secure local intelligence and be briefed by special forces colleagues and MI6 agents already based in Kabul.

Commanders want to avoid fighting but the Paras are deploying with grenade launchers and shoulder-fired anti-tank weapons. They face the challenge of securing the airhead base at Kabul airport and making sure desperate-to-leave Afghans cannot get access to the evacuating aircraft.

Radar to track and trace any in-direct Taliban fire such as mortars, rockets and artillery will also be deployed. But one Whitehall source told The Sunday Times that the airport “will not hold for more than a few days”.

Deployment from the UK and 3,000 US troops came as one Afghan official revealed fighters have reached the Char Asyab district seven miles from the capital.

Officials in Logar province had been detained after it had been taken. Mazar-e-Sharif, the capital of Balkh province, and the country’s fourth largest city fell last night.

It’s chaotic here, there is no hope left. We can expect Kabul to fall very easily within days.

One official revealed the governor’s office, police HQ and local jail were in enemy hands in Sharan, Paktika province, south of the capital. President Ashraf Ghani said the “remobilisation” of the country’s security and defence forces was “our top priority”, in a televised address.

His focus was on “preventing further instability, violence and displacement of my people” as the Taliban hold half of 34 provincial capitals and two-thirds of the country. High-level discussions were taking place with local leaders and international partners over the insurgency, with the US set to remove all its troops by the 20-year anniversary of the September 11 attacks in New York.

Meanwhile, Afghan Hamidullah Abawi told The Sun on Sunday that refugees were swelling Kabul. The education charity worker said: “It’s chaotic here, there is no hope left. We can expect Kabul to fall very easily within days. People are rushing to take their money out of the banks.”

PM Boris Johnson ruled out a “military or combat solution” to the situation in Afghanistan, saying he would work with allies to prevent the country becoming a “breeding ground” for terror. He added the situation was the “inevitable logical consequence” of the decision by President Joe Biden’s administration to remove forces.

Donald Trump first agreed with the Taliban in February last year for the US to withdraw from the country. But Labour leader Sir Keir Starmer said yesterday: “We have obligations to Afghanistan, we made promises to Afghanistan.

There is a real risk international terrorism will take hold again in Afghanistan.

“We can’t walk away and let this turn into a humanitarian crisis, and probably a refugee crisis as well. There is a real risk international terrorism will take hold again in Afghanistan.”

Meanwhile, former Head of the Army Lord Dannatt said: “What about mounting a humanitarian operation in Kabul to look after some of the refugees, to build some camps, bring in some humanitarian supplies?”

“Let’s show the Afghan government we are not completely abandoning them.”

WHO can forget the fall of Saigon? The desperate struggle to board those last helicopters from the US Embassy roof.

Are we about to see similar scenes in Kabul in a few weeks’ time?

Britain wouldn’t be sending in the Paras if we weren’t now preparing for the sudden collapse of the Afghan forces in the face of the Taliban.

Forces that we, the US and Nato trained, equipped and financed for 20 years. Forces that are now suddenly left fighting for their lives. It’s always easy to blame the Americans. Yes, President Trump’s impetuous decision to pull out gave the Taliban the one-sided peace deal they wanted.

But this was a Nato mission too: Our 30-nation alliance failed to stay the course. In the end, we saw the truth of that old Taliban taunt, “You might have the watch but we have the time.”

Some 457 British lives were lost, hundreds more of our troops seriously wounded. But their sacrifice, and the bravery of more than 100,000 British servicemen and women who deployed there, did help to prevent Western-oriented terrorism after the 9/11 attacks. For 20 years they kept the Taliban and al-Qaeda at bay, giving millions of Afghans the right to choose their government, and Afghan girls the right to a proper education.

But it wasn’t enough. We stopped combat operations seven years ago. But I was struck from my first visit as Defence Secretary, more than a dozen years after our troops went in, that it still wasn’t safe to drive the road from the airport to our embassy compound.

Rockets once landed next door during my dinner with the US military. Western troops ended up protecting each other. On every visit I certainly saw signs of hope: tough Afghan special forces, dynamic female MPs, a huge effort to deepen civic society and build new institutions beyond the old tribal loyalties.

But there were other failings too – endemic corruption throughout the government, powerful warlords profiting from ever bigger poppy harvests, porous borders and malevolent neighbours unwilling to tackle the terrorism on their own doorstep.

The biggest lessons, however, are for us. Tackling terrorism is not optional for the West. If we want to preserve our freedoms, we must be ready to fight for them. If new terror groups threaten our cities and way of life, then we have to help throttle them at source.

If fragile democracies ask for our help, as Iraq did facing the Daesh death cult in 2014, then we must respond. Why? Because we have the air power, technology, intelligence and counter-terrorism techniques.

But also because our values – the right to live peacefully, to be able to throw out bad governments, the right of girls to full schooling – are not just Western values. They belong to all of us, even those in the remotest valley of Helmand province.

It’s not just Trump and Biden who’ve ducked out. Nato – our Nato – left too much of the campaign to the US. We shouldn’t be so dependent. Seven years ago, Nato agreed to spend more on defence and security, a minimum of two per cent of GDP, yet only 10 (including Britain) of the 30 members meet that target today.

But Paris, London, Berlin and Brussels have been terrorist targets as much as New York. Neither the Taliban nor al- Qaeda have disavowed their fanaticism or their hatred of the West in general.

No words can compensate for the death of a loved one. But for the families of those 457 British servicemen and women, we must do better next time.