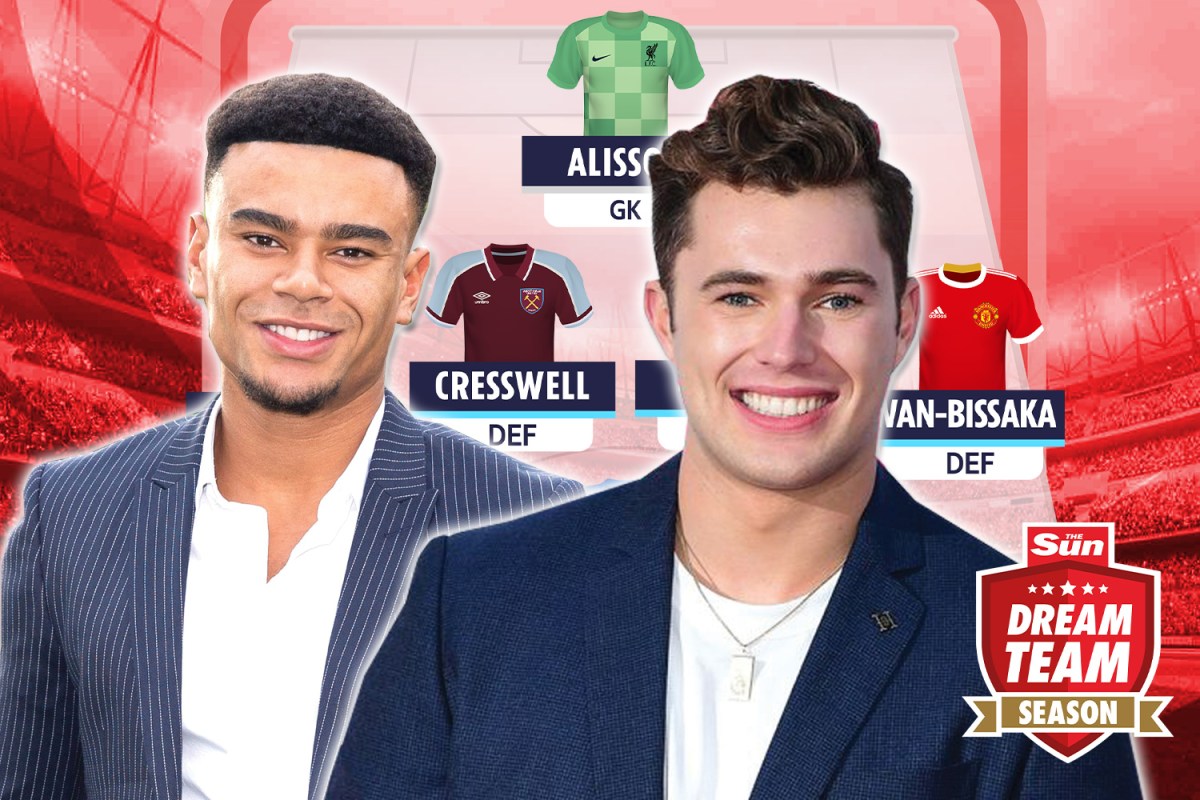 
YOU can fight Curtis Pritchard and Wes Nelson in Dream Team throughout the 2021-22 Premier League season and be in with a chance of winning a share of a whopping £100,000.

The brilliant fantasy football game allows you to challenge thousands of other gamers including a host of celebs.

And best of all, it’s completely FREE to play.

The 2021-22 Premier League season starts THIS FRIDAY as Arsenal face an away-day to top-flight new-boys Brentford at 8pm.

So make sure you’ve submitted your team by then.

You’ll be able to battle ex-Love Island star Pritchard and singer Nelson throughout the season by joining their Mini Leagues.

To do so, just register, pick your XI and then enter the code ‘SGCURTIS’ and ‘SGNELSON’.

Both stars have opted for a 4-3-3, with Mohamed Salah, Bruno Fernandes and Luke Shaw in both XIs.

But that’s where the similarities end.

Pritchard has gone for Alisson in goal and a back-four of Aaron Cresswell, Kyle Walker, Aaron Wan-Bissaka and Shaw.

Mason Mount and Phil Foden make up his midfield, along with Fernandes.

For Nelson – who has just teamed up with Clean Bandit for their new single Drive – he’s gone for Ederson in goal with a back-four FULL of left-backs.

In his back line, he’s got with Shaw teaming up with Matt Targett, Lucas Digne and Kieran Tierney.

In midfield, Fernandes is joined by Kevin De Bruyne and Leeds ace Raphinha.

Salah is accompanied by Kelechi Iheanacho and Harry Kane – despite his impending move away from Tottenham – up front.

So do you reckon you have what it takes to go toe-to-toe with Pritchard and Nelson?

HOW DOES IT WORK?

In the Dream Team Season game, you’ve got a budget of £50m to pick 11 Premier League players.

Choose wisely, some players are pricey and you’ll struggle to completely fill your fantasy football team full of superstar names.

But don’t worry if you fear you’ve made a mistake or a star man gets injured.

As a manager you can make a maximum of three transfers to your team each month.

Your chosen ones are awarded points for things such as scoring, assists, getting a 7+ match rating (via WhoScored) and winning Star Man.

There are private and public Mini Leagues, meaning you can own your mates or take on a world of other fantasy football fans.

So, what are you waiting for? Sign up now and Own Your Mates with Dream Team.