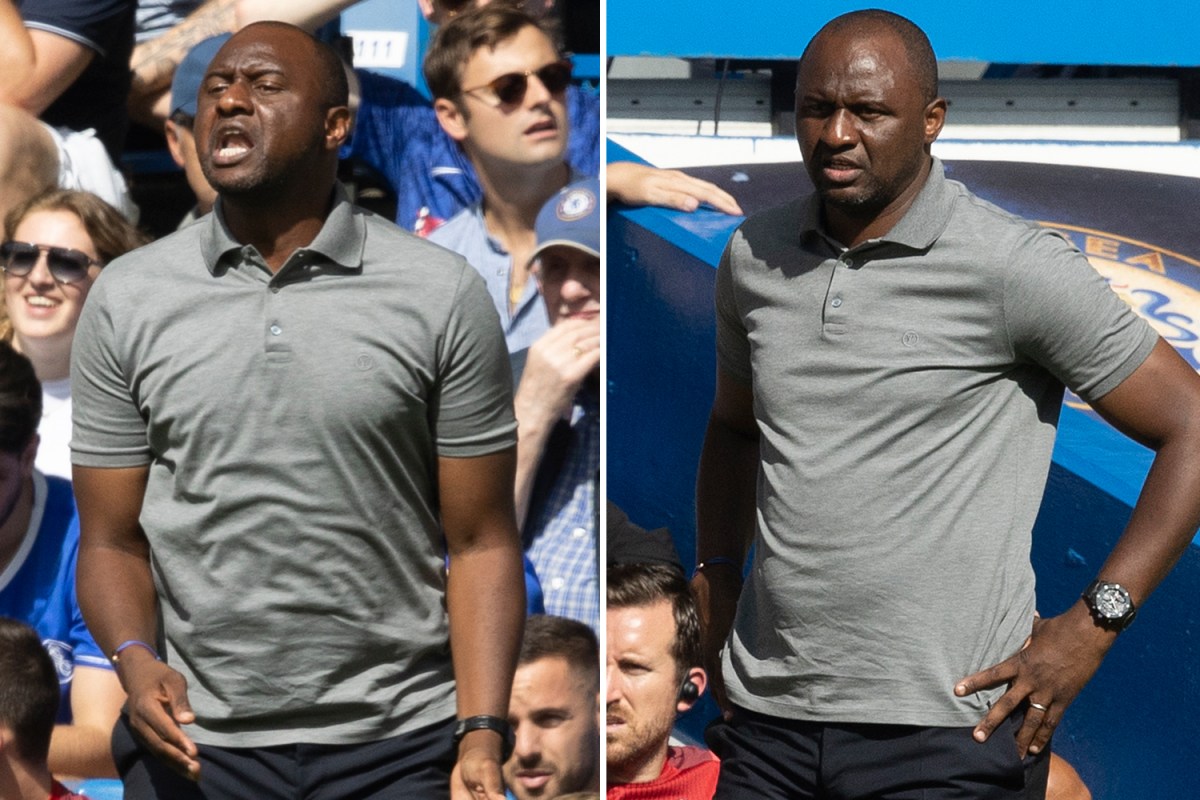 
PATRICK VIEIRA is nowhere near as animated as a Premier League manager as he was as a player.

The Arsenal legend’s spell as Crystal Palace boss started in disappointing fashion as the Eagles lost 3-0 to Chelsea at Stamford Bridge and created next to no chances.

He looked a little nervous before kick-off ahead of his first game as a Premier League boss.

Vieira was out the tunnel early and was deep in conversation with Jordan Ayew just moments later.

He stood respectfully with the rest of the stadium during the minute’s silence for those who have been lost during the pandemic.

And then his Premier League managerial career started properly.

After kick-off, there was a bit of indecision over whether to sit or stand but eventually, seemingly taking the lead from his Champions League winning opposite number Thomas Tuchel, remained on his feet.

Some nervous fiddling with the hem of his shirt followed for the first 15 minutes as Chelsea got a firm grip on the game and looked gradually more threatening.

There was minimal communication between him and his bench and instructions to his players were also limited in the early stages.

Ayew received a gee-up at one stage but on the whole, the new Eagles boss adopted a more observant approach for the first 20 minutes.

He regained his seat around the 17th minute which oddly coincided with Palace’s first real foray into Chelsea’s half.

The first time he spoke to any of his players other than Ayew was in the 22nd minute when he barked an instruction at Wilfried Zaha.

Ivorian winger Zaha reacted in much the same fashion he does when a referee tells him he hasn’t won a free-kick – by widening his eyes, shaking his head and shrugging his shoulders in a fashion that suggests he simply cannot believe the words being said to him.

Much like he did four minutes later when Marcos Alonso curled in a delightful free-kick to put the Frenchman’s team 1-0 down.

Vieira remained rooted to his seat and barely moved for a few minutes – interrupting the stillness only to repeatedly rub his hand over his head in a fashion only a frustrated man can.

It didn’t get much better for him just five minutes before half-time when Christian Pulisic found the net to make it 2-0 to Chelsea.

Again he remained stoic but called over Zaha for a minor tactical change. Or he might have just asked: “Do you fancy getting involved in the game?”

Both would have been prudent.

Vieira wasted no time in getting down the tunnel as the ref blew the half-time whistle.

And he remained seated in the early stages of the second-half – turning only to tell his subs to warm up and discuss potential changes with his coaching staff.

Zaha had Palace’s biggest chance of the game when he broke through down the right channel ten minutes after the break.

But he fluffed his lines prompting another head in hands moment from his boss.

Vieira looked resigned to the fact he’d have to wait for his first points as a Prem manager as the second-half wore on and Chelsea made it three.

And he did not react when the Blues faithful sang ‘Patrick, what’s the score?!’ in the last few minutes.

All in all a subdued day for his team and their new boss, but Palace’s season won’t be defined by an away defeat at imperious Chelsea.

Here are three things we learned from Vieira’s first game as a Premier League manager.