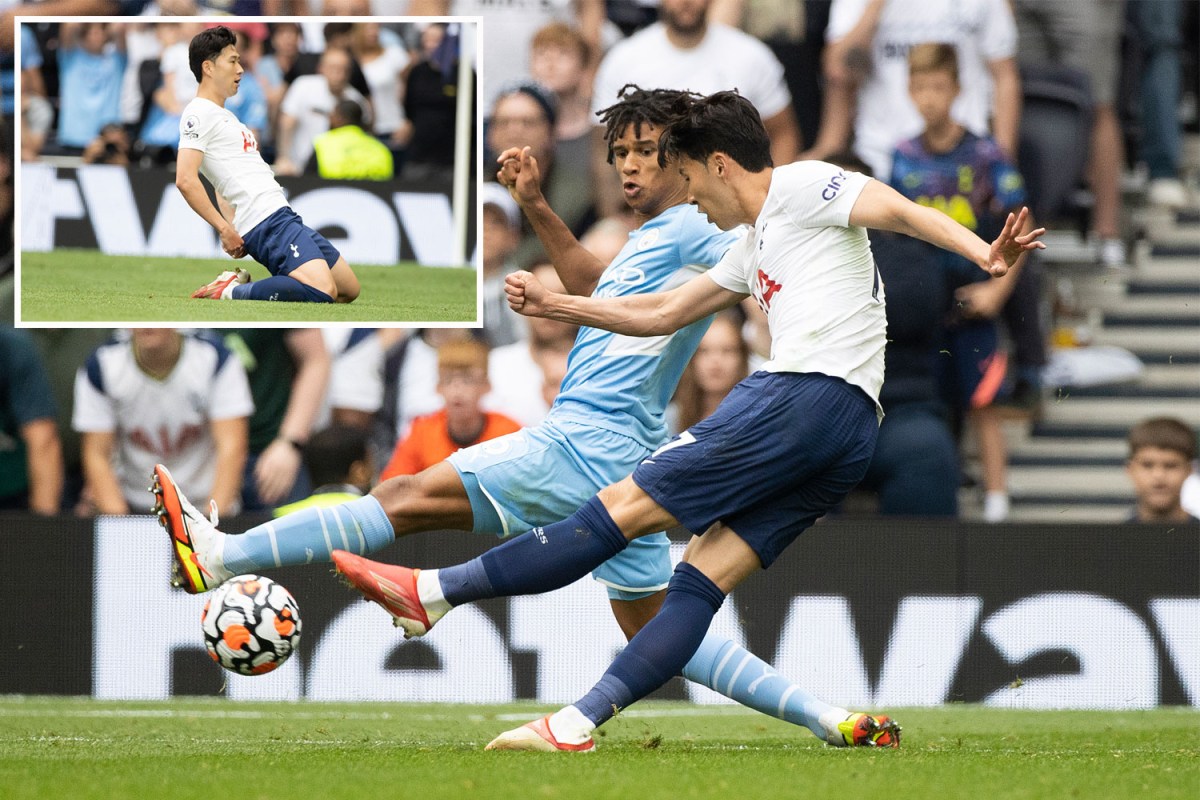 
SON HEUNG-MIN showed Spurs there is life without Harry Kane.

As for City, they were treated to a glimpse of what the future could be like if they do not sign Tottenham’s £160million-valued striker – and it was not pretty.

Make no mistake, Pep Guardiola’s champs would almost certainly have won this had they had a frontman who could have put the ball in the net.

But instead their failure to convert a string of first-half chances cost them dear as Son’s super second-half strike got City’s Prem title defence off to the worst possible start.

Remarkably, City have now failed to score in all four of their defeats at Tottenham’s new stadium, with Son scoring in all of them.

For Tottenham it was the perfect to kick off Nuno Espirito’s reign as manager – as their fans celebrated by singing: “Are you watching Harry Kane?”

The new gaffer left Kane out of his matchday squad following the England captain’s late return from his summer break and the continued speculation over his future.

Nuno gave an insight into their relationship when he admitted he did not even know where last season’s Golden Boot winner would be watching this clash.

Wherever the Three Lions skipper was, his chances of City stumping up the cash Daniel Levy wants for his striker surely increased after this.

The TV monitors showed the Tottenham chairman checking his mobile phone in the directors’ box before kick off. One wonders if he had a message from you-know-who.

City emerged first into the arena to be met by a sea of navy white flags and a deafening crescendo of boos from the home fans, who then cheered their own gladiators into the coliseum.

As Son prepared to take the kick off he shut he clenched his hands, closed his eyes and appeared to offer a little prayer.

Someone upstairs was clearly listening.

For all the talk of a new era at Tottenham, Nuno’s first starting XI did not include one new signing.

That said, the likes of Steven Bergwijn and Lucas Moura looked like completely new players as they ably supported Son in attack – even if they City did not give them a kick in the opening exchanges.

City’s new £100m man Jack Grealish took less than three minutes to signal his intentions as having won an earlier header he embarked on a powerful run towards goal which almost resulted in a City penalty as he was tripped by Oliver Skipp on the edge of the box.

Ikay Gundogan’s free kick resulting free kick then clipped Skipp’s head as it curled narrowly over for a corner from which Fernandinho headed wide as Spurs keeper Hugo Lloris came and flapped.

With the visitors in the early ascendancy their travelling fans taunted their hosts by singing: “Harry Kane, he wants to be blue.”

The champions then went close again as Joao Cancelo dragged a shot wide after Riyad Mahrez’s effort was only half-cleared by Eric Dier.

You wondered if City were going to pay for not taking their chances – if only they had a £160million striker!

And they almost did when Son Heung-min’s corner flashed dangerously across the face of their goal.

As Grealish continued to impress, Tottenham had to resort to strongarm tactics to stop him with Japhet Tanganga and Davinson Sanchez arguably fortunate not to get booked for sending him to ground.

It may not have gone down well with City but it delighted the home fans who sang: “Japhet Tanganga, he’s one of our own.”

Not quite as catchy as the original version but it might catch on!

After Mahrez had wasted another for City, hooking wide Raheem Sterling’s centre from 10 yards, Steven Bergwijn’s blistering run out of defence presented Son with a chance to snatch the lead for Spurs just before the break.

But the South Korean’s curling shot from the edge of the box deflected wide off Cancelo with ref Anthony Taylor booed for awarding a corner instead of a goal kick.

Spurs created the first chance of the second half when Pierre-Emile Hojbjerg’s cross was cleared from the six-yard box. Lucas Moura then dragged a shot wide.

But with City slow out of the blocks for the second half it was Son who broke the deadlock following another lightning quick counter by Bergwijn.

The flying Dutchman played the ball out to Son, who cutting in from the right, outfoxed Nathan Ake with a couple of stepovers before whipping a 20-yard shot into the far bottom corner in the 55th minute.

The brilliant Bergwijn should have added a second four minutes later but with only City keeper Ederson to beat he clipped his shot into the side netting.

Grealish had a great chance to level but shot straight at Hugo Lloris – proving that not even £100m buys you a goalscorer.

Son then went close with another vicious shot before Pep sent on Kevin de Bruyne in the 79th minute in a bid to salvage this fixture.

And the Belgian nearly did with a shot from the edge of the box which was tipped behind by Hugo Lloris, who then later denied Ferran Torres as Spurs held on for a memorable victory.

A penny for your thoughts, Harry.