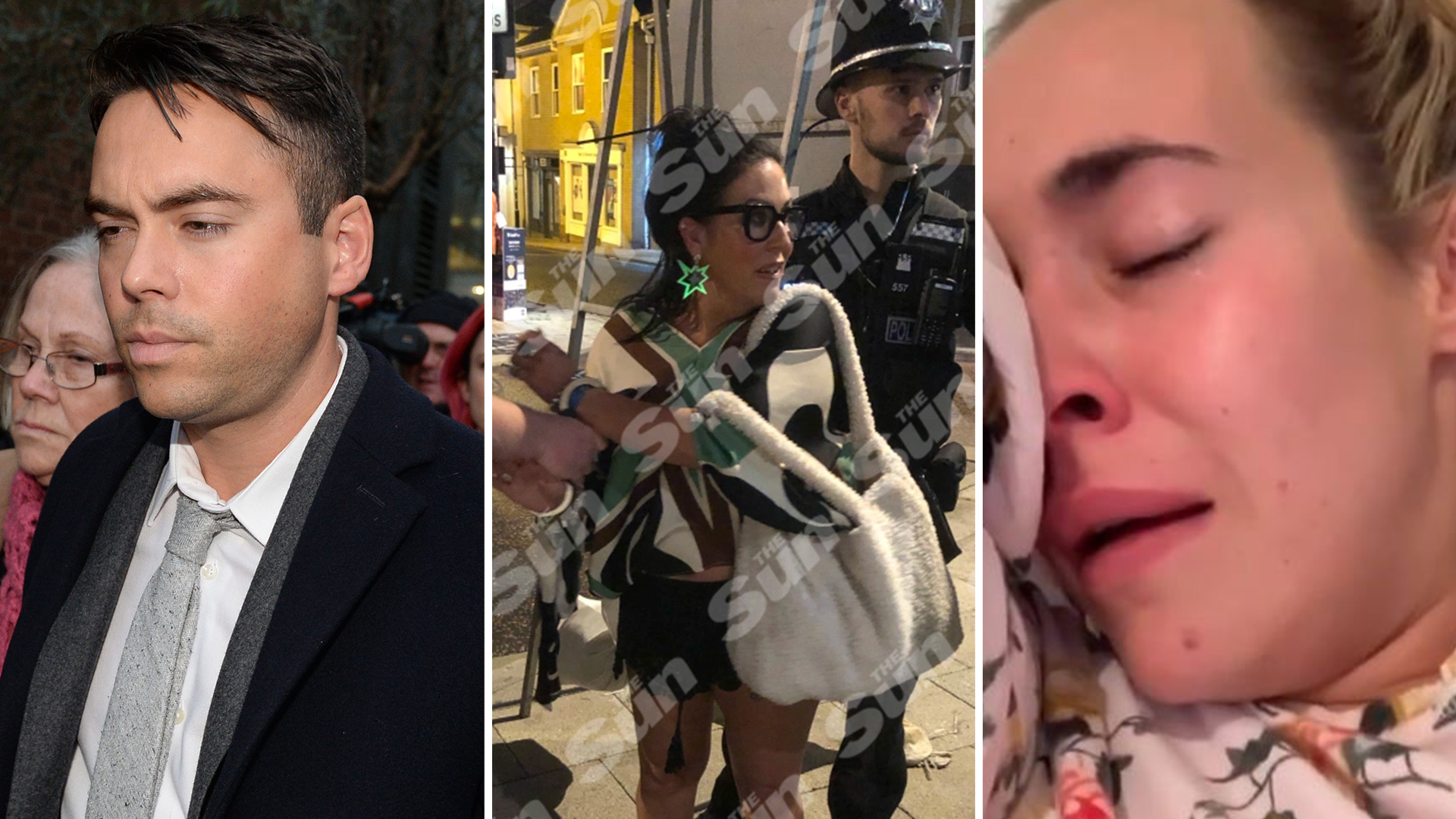 
THE life of a soap character is always full of twists and turns – but sometimes what happens off-screen proves even more dramatic.

This week EastEnders star Jessie Wallace was slapped with a “clear warning” from the BBC soap after her nightclub arrest shame — where she told a cop  to “f*** off you fat c***”.

The 50-year-old actress, who plays wild Kat Slater, left the officer on his knees in agony in the early hours of Sunday.

She’s not the first ex-soap star to find their life taking an unexpected downturn since their TV heydays.

Earlier this year it was reported Sean Ward – who played evil Callum Logan on Coronation Street from 2014 to 2015 – was homeless, after previously getting arrested at an anti-vaccine protest in London.

The actor, who used to earn £100,000-year, told fans how he’d lost everything and the stress of it all caused his teeth to fall out.

In an Instagram post, Sean told fans how he’d lost everything: “Firstly the work dried up. No one would hire me whether in front of or behind the camera, all my usual ways of making money just stopped, eventually I couldn’t afford the rent.

“So I gave up my 4 bed house and move onto my friend’s couch. I had to put all my belongings into storage.”

But it all came crashing down in November 2017 when he was dismissed from the show after being accused of sexually assaulting two women in a nightclub.

He was also accused of “pursuing” a 15-year-old girl.

Although he was cleared of any wrongdoing over the alleged “sexting” to the teenager, he pleaded guilty to two charges of sexual assault against the two clubgoers.

He was ordered to pay a £500 fine and a carry out 12-month community order.

Langley, now 38, released a statement where he apologised for his “disgraceful behaviour”.

He went on: “I have absolutely no memory of what happened because of excessive alcohol consumption and it was for this reason that I behaved completely out of character.

“However, I take full responsibility for my actions that night.”

He has since been replaced in the soap by actor Gareth Pierce – and Bruno has since tried to launch a music career.

One of the many actors to have played Ian Beale’s son, Peter Beale, over the years, Joseph Shade starred in EastEnders from 1998 to 2004.

But in 2017 he was arrested for sexual assaults on three girls between the ages of 14 and 17.

The remaining five counts were ordered to lie on file.

The court heard that Shade had a troubled childhood and had committed the offences while working as a youth worker, between 2012 and 2015, which brought him into contact with vulnerable teenagers.

Shade, then 24, was handed an 18-month sentence suspended for 24 months, a sexual harm prevention order for five years and 150 hours of unpaid work.

He now lives with his girlfriend in Nottingham.

In 2020, former Waterloo Road actor Craig Fitzpatrick, 34, was jailed for 18 months after threatening a family with an 18inch machete.

The Oldham actor, who starred as Lewis Seddon in the BBC drama as well as appearing in Shameless, smashed windows at his victims’ property with an 18 inch blade while high on drugs and drink after a “family dispute”.

The female victim said the family feared for their lives after he warned they would be “dead” if he saw them.

The court heard he was “highly intoxicated and under the influence of drugs” during the incident on August 27 that year.

Fitzpatrick was jailed for 18 months.

Sacked for turning up to work drunk

In 2015, Stephanie Davis, 28, was warned by Hollyoaks bosses to cut down on her drinking while playing Sinead O’Connor on the show.

But, after one particularly wild night which saw her turn up for work still drunk the next day, she was fired.

At the time, a Hollyoaks spokeswoman said: “Stephanie Davis will no longer be filming Hollyoaks. Her contract has been terminated with immediate effect.”

Her rep said: “Stephanie’s contract was terminated following warnings for lateness, attendance and after a final incident in which she turned up to set unfit to work because of alcohol consumption.”

Scriptwriters had to quickly amend her storyline so Sinead could be written out.

Steph was invited back to Hollyoaks again in 2018 and she stayed for a year before quitting the show “to be happy”.

She’s now sober and living a more settled life as a single mum to son Caben.

Leslie Grantham famously played Dirty Den Watts on EastEnders from the show’s creation in 1985 – and even came back from the dead.

But the actor, who died in 2018, had a colourful life off-screen too.

In 1966, when he was 19, Leslie tried to rob a taxi driver named Felix Reese in West Germany. A scuffle ensued, and Felix died after being shot in the head.

Leslie claimed the gun had gone off during their struggle and that he did not know the gun was loaded – which would have landed him a manslaughter conviction.

But the jury did not believe him and he was convicted of murder, and sentenced to life in prison, serving his sentence in Britain because he was a soldier, though he was dishonourably discharged following his conviction.

Leslie served 10 years in prison, discovering a love for acting while incarcerated, and starring in various plays put on for inmates and the public.

In 2003, 14 years after Den had been killed the first time, Leslie returned to EastEnders.

But a year later, photos of married Leslie exposing himself on webcam were released.

It was also claimed he’d insulted several of his EastEnders cast mates, including Shane Richie, Wendy Richard, Kim Medcalf and Jessie Wallace, and the cast reportedly went on strike until he was disciplined.

Further claims then emerged that he had exposed himself on webcam to two other women, one of whom alleged he had dressed up as Captain Hook and masturbated.

Leslie was forced to apologise and he donated money to charity in an attempt to right his wrongs.

But his character was killed off – for good – soon after.

Banned from EastEnders for drinking

However, she was convicted of drink-driving and banned for a year after downing five vodkas in 2004, and subsequently axed from the soap.

A source at the studios said at the time: “It was decided to make the changes after she had a few problems with drinking. It has been done to help her rather than to punish her.”

But life got worse for Elaine after she left the show. In 2005, her mother killed herself, and then her sick one-year-old son James died, having had surgery for a diaphragmatic hernia.

She fell pregnant again in 2007, but sadly miscarried shortly after.

Elaine went off the radar for a long time after, but in 2018 she was spotting appearing to be downing mini bottles of wine in the street before midday.

She was last seen in 2020 looking much healthier as she went for a jog with her husband.

But the same year, he was arrested for growing cannabis at his girlfriend’s house in Stackstead, Lancashire.

The actor, 39, wept as the judge told him he would be spared jail, with a 12-month sentence suspended for two years.

In 2016 he was also accused of harassing a contestant on The Apprentice but was later cleared.

He’s now a multi-millionaire with an £18m cosmetic empire.

In 1998, the character caused the death of popular street resident Des Barnes, played by Philip Middlemiss, who was attacked by a group of thugs after coming to the rescue of stepson Tony.

After leaving the soap, Hargreaves became a real life drug dealer, and in 2012 he was arrested after police found 3kg of high-grade cannabis during a raid on his family home in Salford.

They also found £38,000 of ‘dirty money’ stuffed into Tesco carrier bags, shoe boxes and drawers at the house, which Hargreaves, then 48, shared with ex-wife Samantha and their five children.

Although not in front of the camera, director Tim Dowd had an illustrious career on the soaps, working on Emmerdale and Casualty before moving to Coronation Street, where he remained for 24 years.

But in 2018, the soap’s cast and crew were shocked when he was arrested for child grooming offences after a sting in which a police officer posed online as a 13-year-old girl.

During chats, he had asked for indecent photographs and tried to get the ‘girl’ to engage in phone sex.

The officer involved told the court the ‘teenager’ told Dowd she was 13, to which he replied he “didn’t have a problem with” that.

The 68-year-old was found guilty in March 2019 on four counts of trying to incite a child into sexual activity, but was spared jail.

He was given a two year community order and instructed to pay prosecution costs of £1,500. He also had to sign the sex offender’s register for five years and has a sexual harm prevention order against him.