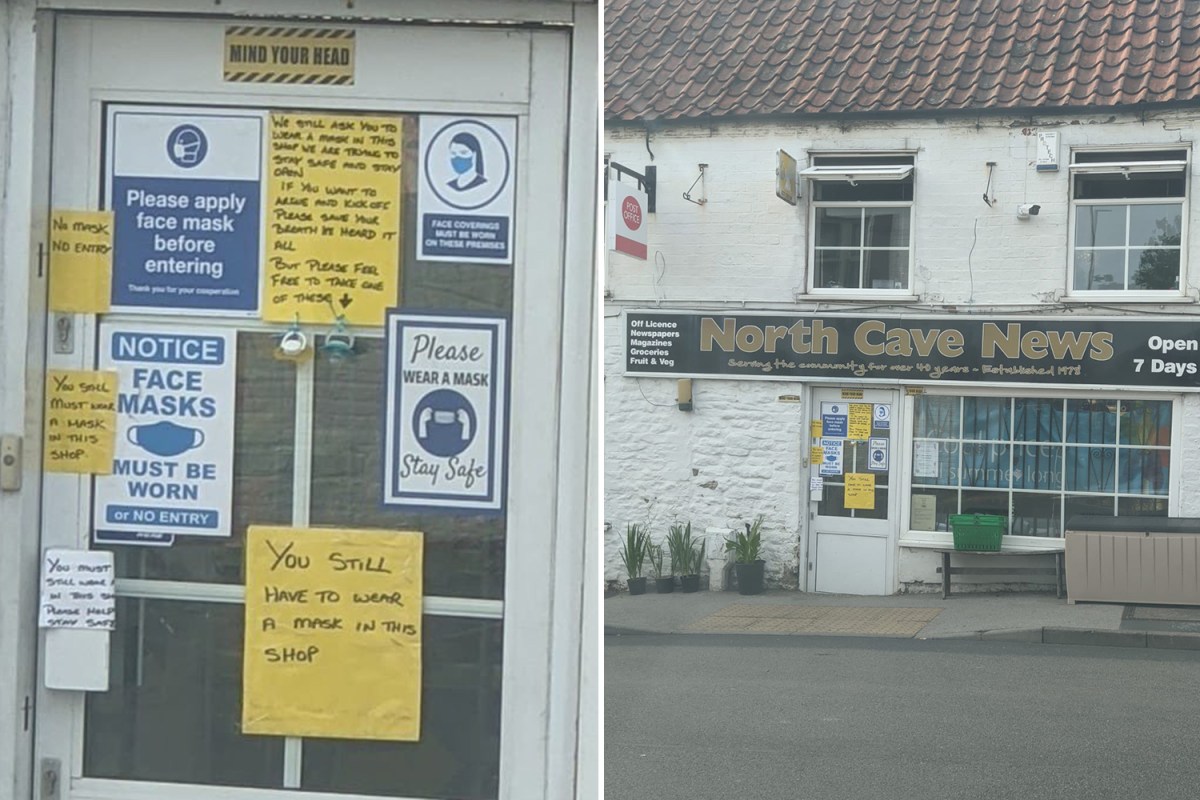 
A VILLAGE STORE has been slammed as Britain’s “most unwelcoming” shop after the owner has refused entry to shoppers without masks.

Maria Burke, who runs North Cave News, in North Cave, Yorkshire, has a firm no-mask no-entry policy and has plastered warnings over her front door.

But she was furious when shopper Andrew Ellison blasted her shop on Twitter.

Mr Ellison said to his followers: “Is this the most unwelcoming shop in the UK? And they are willing to discriminate against the medically exempt.

“Welcome to the UK. There are times when I don’t recognise my country.”

He also shared a photo of the shop which has NINE official and homemade signs urging people to wear a mask.

Maria has also attached two dummies to the front door of the shop with a note that says “If you want to argue and kick-off please save your breath I’ve heard it all. But please feel free to take one of these.”

The shop has been in Maria’s family for more than 40 years and she has defended her decision for the strict no-mask, no-entry policy.

However, some Twitter users compared it to scenes from the dark comedy The League of Gentlemen and said: “Have you taken a trip to Royston Vasey?”

While others came to Maria’s defence.

Jo Wilson-Scaife said: “How dare you put this on social media this lady hasn’t had a day off in the whole of the pandemic, she has worked hard for the local community delivering all over our area, and you come along and tweet this.

“You are nothing but a bully! This lady is trying to keep everyone safe.”

NO MASK NO ENTRY

Since midnight on July 19, “Freedom Day” laws in England requiring masks to be worn in shops and other indoor settings have been lifted.

Social distancing is no longer required, and mask-wearing is optional except on public transport, where in London it remains compulsory and in other parts of England, still remains advised.

Maria said throughout the pandemic she has been targeted by anti-maskers, and some customers have even thrown things at her.

She told the Hull Daily Mail: “Honestly if you’d heard what I have been called.

“We have put ourselves out and tried to keep open and ourselves safe and open for the locals, and we get criticisms like this. I am really upset.

We need to keep looking after each other. It’s selfishness otherwise, people might have someone vulnerable at home that they’re protecting

“I’ve had people coming in and saying they can’t wear one and then pulling one out of their pocket, or builders who claim they have asthma, and then pull their t-shirt over their faces, what’s the difference? I have asthma and I wear one.”

Ms Burke said she wants to protect her elderly customers who she has been looking after throughout the pandemic, and hasn’t had a day off since it began.

She added: “We need to keep looking after each other. It’s selfishness otherwise, people might have someone vulnerable at home that they’re protecting.”

However, Mr Allison was unrepentant about his viewpoint, adding: “It’s no longer a legal requirement to wear masks, and as I alluded to in my tweet, the evidence that mask-wearing is effective in reducing transmission is not there.