Shirking civil servants need to get back to the office NOW 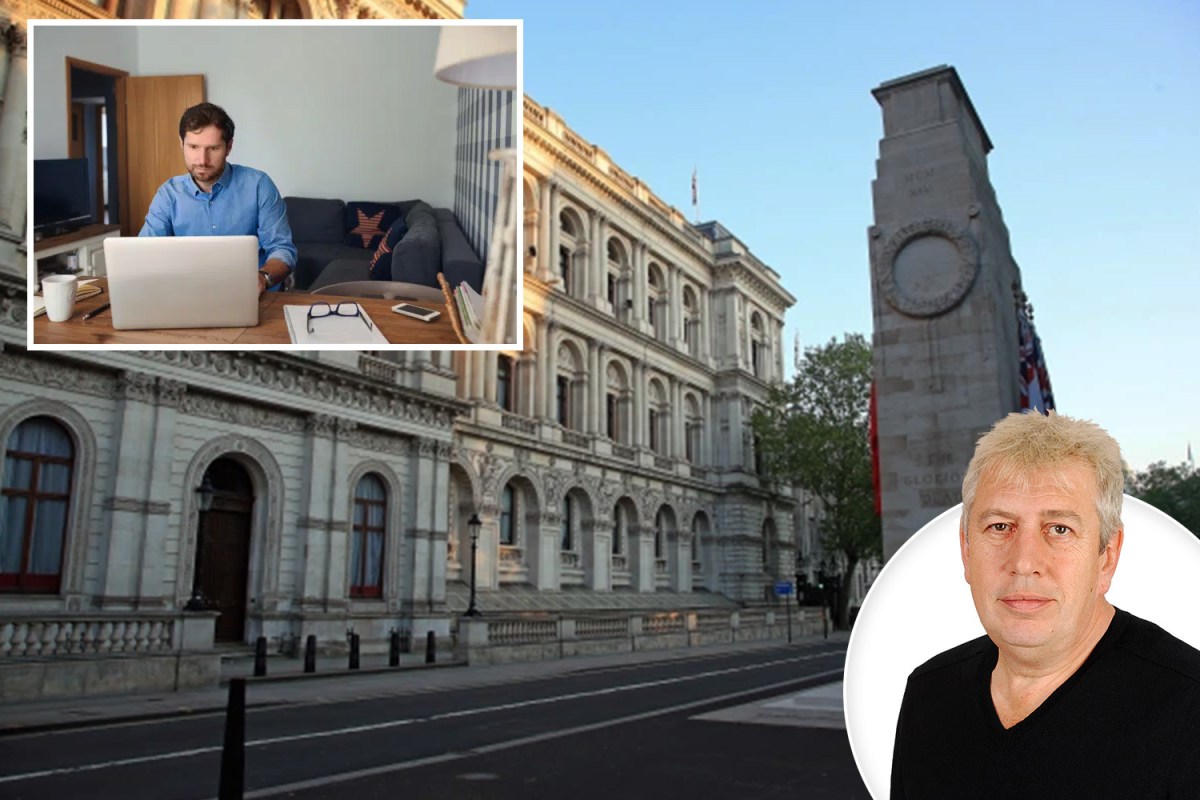 
THE tourists are back in Westminster. The pubs and cafes are open. The whole area is once again a hive of activity.

But not actually INSIDE the huge ­buildings which line the streets around Whitehall. It’s very quiet there.

That’s because while pretty much ­everyone else has got back to work, the civil servants haven’t.

James and Olivia would prefer to ­continue working from home, if that’s OK. Saves an awful lot of money on au pairs and commuting, you know.

Even as Chancellor Rishi Sunak was urging us all back to work, the civil ­servants in his own department were ­sitting at home, twiddling their thumbs.

It is estimated that as few as 20 per cent of public sector workers have heeded the call to return to their offices.

Pretty much everyone else is back. Just not them. Now, this might be OK if they actually were working effectively from home. But that doesn’t seem to be the case at all.

As you’ll discover if you apply for a passport in order to visit a green-listed country (currently North Korea, ­Turkmenistan and Djibouti, I think).

The passport office is warning of huge delays. Same thing if you’re applying for a driving licence. The DVLC reckons it will take about six to ten weeks.

But social media users have complained they have been waiting six months. So it clearly ISN’T working.

Our country is divided along many lines. Most of all economic inequality, of course. Then there’s the North-South divide.

But increasingly we’re also divided between those of us who work in the ­private sector and actually create wealth. And the 16.5 per cent who work in the public sector which spends it.

If you work in the public sector you are far more likely to have a secure job, rather than a short-term contract.

You’ll have a generous amount of time off for holidays — which you can spend ­demonstrating against the wicked Tories alongside most of your colleagues, if you wish. You’re more likely to have an ­agreeable pension.

Further, you probably didn’t have quite as bad a time of it during lockdown than your fellow citizens in the private sector.

In 2020, the number of jobs in the ­public sector actually increased, while those in the private sector went down.

Average wages from April to September rose for those in the public ­sector, but not in the private sector.

So, you civil servants — you might now be beginning to understand why the rest of us are getting just a little bit, you know, arsey. Just losing our patience a little with regard to your behaviour.

Yes James and Olivia, I’m talking about you. We kid ourselves that the same rules apply to everyone in this country.

But clearly that is a delusion. Some people get away with taking not a blind bit of notice of injunctions to return to work. To use Whitehall terminology, this is called “taking the p**s”.

We pay for these public sector jobs because they are important to keep the state running. That contract doesn’t hold if you are not doing the work that is required.

So, Rishi Sunak. You’re a fine ­Chancellor. But instead of lecturing the rest of us about getting back to work, how about you direct your comments to the well-paid civil servants?

That would cheer us all up a bit. And maybe reduce the suspicion that we’re being taken for a ride.

THERE’S meant to be an Anglo-French summit every couple of years.

But the boorish, sulking French are refusing to take part because they hate us even more than usual at the moment. Relations between the two countries are about the same as they were on the eve of ­Agincourt.

Never mind. We can do without a summit with the odious President Macron.

Let the French, with their daily violent ­protests and failing economy, continue to stew in their own juices.

A GREAT week at the Olympics, except for the dodgy crashing Danes nicking a gold medal from us in the cycling.

I was totally opposed to BMX being awarded Olympic sport status until we won a bunch of medals in it, including gold for Charlotte Worthington and Declan Brooks’ bronze in the freestyle, above. Then I was bang in favour.

I felt the same way about skateboarding until the brilliant Sky Brown pulled off a bronze.

But skateboarding and BMX – aren’t they just stuff young teenagers do when they should be at home reading Shakespeare?

What next – Olympic medals for handbag-snatching, snogging, glue-sniffing and drinking litres of cheap cider while shouting obscenities at adults?

But I was wrong. BMX is more deserving than synchronised swimming, for example. Or indeed the discus, one of the oldest of all sports.

I mean, it’s just a heavy frisbee, isn’t it? Next Olympics – Minecraft should make its debut. We’ll clean up in the medals there, too.

I WAS enjoying the women’s weightlifting – I like all that gurning.

But then a very large person turned up to take part.

That’s Laurel Hubbard, who transitioned into being a nice lady a few years ago. Laurel has a massive advantage over the competitors.

It is utterly wrong that Laurel should be allowed to compete against ­biological women.

One day, not too far down the line, it will mean an effective end to women’s sport.

By the same token, it is also wrong that men who have transitioned should be allowed on female ­hospital wards. And yet our Government may allow it to happen.

We can treat transgendered people with equality and respect without making life a lot more uncomfortable for millions.

THANK the lord – kidnapped Belarusian sprinter Krystsina Tsimanouskaya is safely on her way to Poland.

She says agents from her country’s vile government tried to force her back to Belarus after she criticised the team coaches. But Krystsina – who is known to be a bit speedy – escaped their clutches.

It all reminded us that we need to do something about Belarus.

It continually flouts all international laws and codes of conduct.

There is no opposition to the Stalinist halfwit leader Alexander Lukashenko.

We need stronger sanctions against this ghastly place and free passage for anyone who wants to get the hell out.

RIGHT now, in Afghanistan, the Taliban savages are hunting down any local who helped the British forces.

And when they find them, they kill them. It’s only a matter of time before they catch up with Mohammed, 45, a translator who worked at the British Embassy in Kabul.

He is terrified that now the British troops have pulled out, he will be killed.

His family has worked for the embassy for 70 years and his dad was awarded an MBE. But when Mohammed applied for asylum over here, he was turned down.

Our conduct has been pretty disgraceful. We owe people such as Mohammed a reward for their loyalty and bravery.

They are deserving of UK citizenship – it is the very least we can do. And once we’ve sorted that out, we ought to make a pledge.

No more meddling in countries unless they meddle with us first. It never works out. It always makes things slightly worse.

For them and for us, frankly. And especially Afghanistan. We got well and truly stuffed by the rockhoppers in the 19th Century. It’s happened again now. Stay away.

THE Government has got into the unpleasant habit of appearing to tell porky-pies.

As late as last week ministers were telling us there were no plans whatsoever to vaccinate schoolkids against Covid.

But also last week I saw some positions advertised at NHS Jobs online.

Yes, 25 new jobs at education authorities across the country for school immunisation managers.

So, call me a detective, but there seemed to be something afoot.

And sure enough, yesterday the Government announced plans for vaccinating all our 16 to 17-year-olds.

Just be truthful with us, Mr Johnson.

Fur love of god, save him

TODAY is execution day for Geronimo, the lovely alpaca I told you all about on Tuesday.

Only an intervention from the Prime Minister can save the creature now.

The alpaca is due to be shot by officials from the Department of Environment, Food and Rural Affairs.

They think – and it’s disputed – that he has bovine tuberculosis.

Come on, Boris – step in and save the life of an innocent creature.

Your opinion poll ratings have been looking a bit dodgy of late – so here’s a way to give them a boost.

And when you’ve done that, end the slaughter of our badgers. They are also being culled in the name of bovine TB.

Sort it out, Boris – and make yourself liked once again.