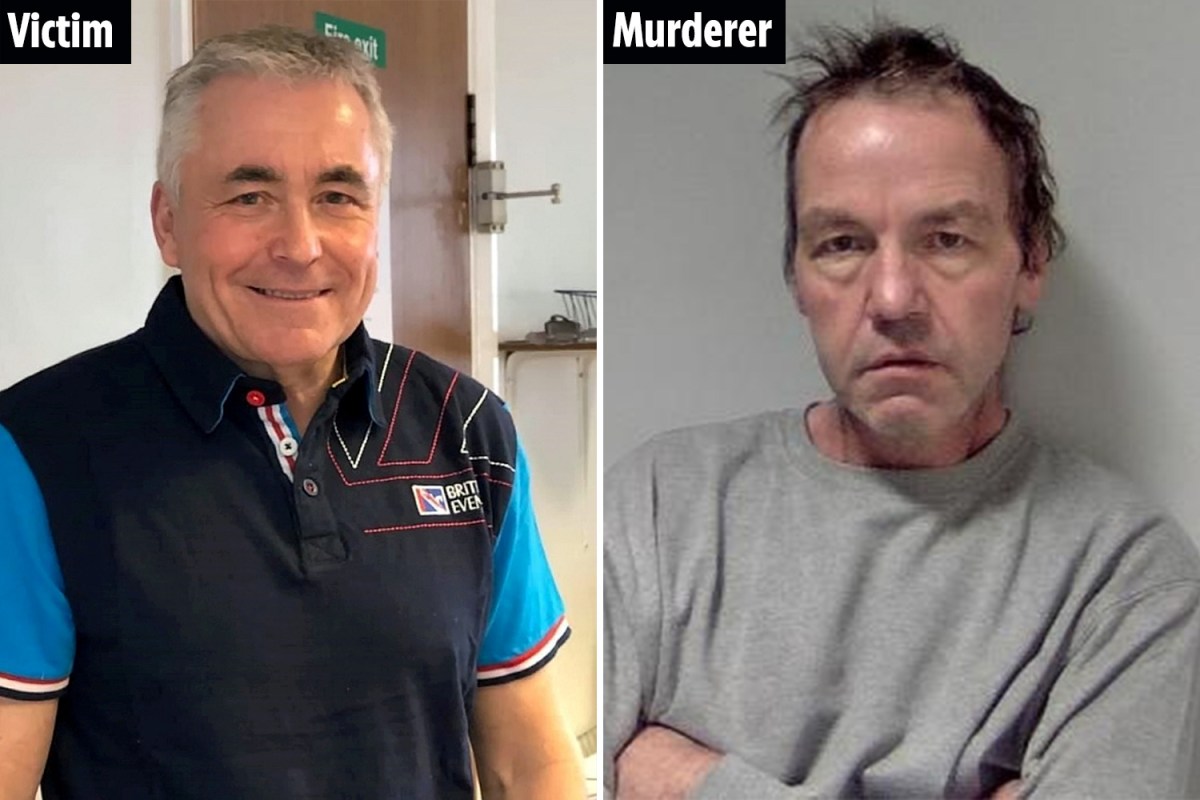 
A JILTED ex who killed his love rival and dumped his body in a burning car to make it look like suicide has been jailed for life.

Sex-obsessed Mark Chillman brutally attacked Neil Parkinson, 66, and hit him over the head with a heavy weapon before setting his BMW X5 alight with him inside.

The 52-year-old was convicted of murdering the dad-of-two after he discovered he was dating his ex-girlfriend Julie Adcock.

Mr Parkinson’s torched car was discovered after cops were called to a lay-by near Cotheridge, Worcester, on December 12 last year.

Twisted Chillman was obsessed with mum-of-three Julie, and considered her his “property” and “chunk of gold”.

Jurors were told that jealous Chillman plotted to murder Mr Parkinson because he wanted to “engineer a reconciliation with the woman he could not bear to see rejecting him”.

After he was dumped by Ms Adcock in June last year, he placed a tracking device on her car and stole knickers from her £800,000 farm which he “cuddled every night”.

Police found items of her clothing including her underwear at his home, and he admitted that he bought her perfume to spray on them.

He also left chilling messages written in lipstick on her bathroom mirrors which declared: “I love you forever”.

Her family dubbed him the “Layby Lurker” because he parked on the side of the road near to her home in Bromyard, Herefordshire, in the dark.

Worcester Crown Court heard that Chillman struck as Mr Parkinson drove away from Ms Adcock’s farm to care for his elderly mother, who suffered with dementia.

Chillwell denied the charges, but was today jailed for life and must serve a minimum of 22 years before he can be considered for parole.

Sentencing him, Judge James Burbidghe QC said: “You lay in wait, it was your intention to do harm to someone who had replaced you in the affections of your previous partner.

“You arranged him in the driver’s seat and poured petrol over him and the vehicle. Mercifully Parkinson would not have known of the immense heat that engulfed him.

“The evidence shows that you had planned this for some days, or even weeks, increasingly appearing near to the farm, staking it out and scoping the area and the situation.

“After Ms Adcock told you to leave the farm, you immediately harboured a desire to cause Parkinson harm.

“On the day of the killing, you left your own phone on Bromyard Down, so the cell sighting was something you could rely on as an alibi.

“In an interview with police, you told lie after lie and said you we were with Mr Parkinson, but he took his own life.

“It was when forensics came in, you had to change to nature of your defence, as you could not explain the distressed fracture to the rear of his skull.

“So you had to tell different lies, not only did you say Mr Parkinson had told you to dispose of the multiple phones, but he had taken you to the layby where he had hidden the jerry cans telling you that he intended to set fire to his own car as insurance fraud.

“It must have been a strain for you to try and remember all of the lies that you have invented. There was an intention to kill and significant pre-planning.”

We as a family can’t help but wonder how he must have felt in the last moments of his life. It leaves us a family with unbearable pain

Creepy Chilman admitted to cops in an interview that he was “obsessed” with Ms Adcock and that he was unable to “let her go.”

When interviewed by police he claimed Mr Parkinson had set himself on fire and that the decision to end his life was “his choice'” but it meant he was now “out of the way”.

After the murder Chilman drove Mr Parkinson’s unconscious body to a lay-by and used around 40 litres of petrol from two stolen jerry cans to set him on fire in the driver’s seat of the car.

He later sent a “suicide text” to Ms Adcock, pretending to be from Mr Parkinson in the form of a confession.

It read: “I lead a double life. I use and abuse woman. It goes like this. I’ve been taking women of there partners and husband’s for a very long time and I get a buss from it [sic].”

But Ms Adcock said she knew the message had not been written by her partner because of the “appalling” spelling and grammar.

She also recognised other phrases that Mr Parkinson would never have used because he was “a gentleman”.

In a victim impact statement, Mr Parkinson’s son Christopher, 42, asked Chillman: “How could you be so heartless?”

He went on to say that his grandmother had been left “confused and lonely” by his dad’s death, explaining that she was “devoted” to him.

Chris said: “I have lost my father, my best friend, no one will replace that – ever. My children have lost their grandfather who they adored and were always so happy to see and be around.

“Myself and my wife, Carol, were fortunate to see my father on the night of December 12 around 5.30pm, and as usual he was happy and all smiles – we will cherish that memory forever.

“He was always a great mate and a larger than life character, who will never be forgotten.

“We as a family can’t help but wonder how he must have felt in the last moments of his life.

“Was he afraid? Did he think of us? It leaves us a family with unbearable pain.

“We have so many unanswered questions – we will never truly know what happened to our dad, granddad, son and brother.

“He didn’t deserve to leave the world in that way. You left Neil’s body in an inhumane way and walked away.

“At least you will have the rest of your life to reflect on your actions that night.

“Our light and our life has gone out and will shine no more.”

Neil was simply leaving his partners home to return home to take care of his elderly mother when he was tragically killed in a senseless attack and my thoughts and condolences remain with them.”