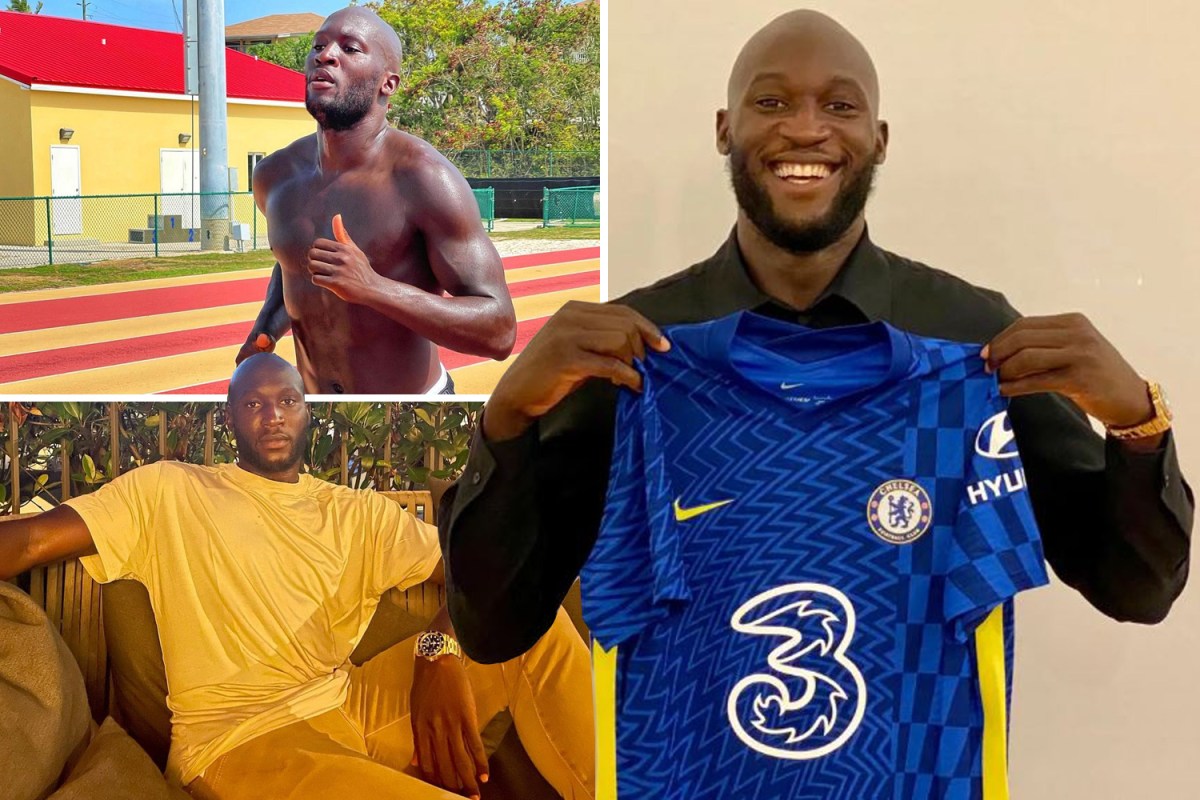 
REBORN Romelu Lukaku has finally made the move back to Chelsea from Inter Milan.

The Belgium star, 28, was desperate for a move to Stamford Bridge this summer and made the switch on Thursday for a club record fee of £97.5m on a reported contract of £325,000-per-week.

Lukaku believes he has unfinished business in the Premier League, after failing to establish himself in West London first time round.

The powerful centre forward has rejuvenated his career in Serie A – scoring 64 goals in two seasons to become one of the world’s most feared strikers.

He’s come a long way since his tough childhood growing up in Antwerp, Belgium.

When his father was sentenced to 15 months in jail for assaulting a woman and keeping her in the boot of his car, a claim he strenuously denied, the family were forced to live in social housing.

It was left to mum Adolphine to support the family, who took on cleaning jobs to make ends meet.

Lukaku is believed have a fortune of around £40million today.

However in 2013, his life was very different. His dad Roger was alleged to have assaulted a former lover and kept her in the boot of his car, although he accused her of lying.

He was sentenced to 15-months inside for failing to attend his trial, but claimed he missed his summons because he had moved to a different area of Brussels and wasn’t registered at his new address.

Roger was forced to retire as a professional footballer and the family were left broke with their bread-winner locked up for 15 months.

The Lukakus were moved from their home to social housing in Antwerp, where they were stuck without electricity and slept on the floor.

“When my father stopped playing we landed in a hole financially. People left us to fend for ourselves, and I have always kept that in my mind,” Lukaku said.

“Everything changed for us inside two months. I remember everything – I was five or six, had just begun playing football, and then my dad retired.

“We didn’t have a TV or even electricity at home. We were then evicted from our flat, and we moved to Antwerp.

“In the beginning we didn’t even have curtains on the windows. We slept on the floor, with my mum, brother Jordan and me upstairs and my dad on the ground floor.

“I had to stop playing football, as my father wasn’t able to drop me off for training.

“My mother became diabetic, and her health was not good. I went to live with my aunt for a while until my mum returned home.

“My mother is the boss. I make decisions about my football career without asking her, but she is my source of inspiration for everything else.

“She worked her fingers to the bone for us. Despite her illness she would work as a cleaner in homes and cafes.

“Jordan and I used to get the bus to training with Rupel Boom, and then go on to where she was working in Antwerp. We’d mostly help her move tables in the cafes she cleaned.

“On my sixth birthday I told her I would play for Anderlecht, so I could help her with money.”

Lukaku was adamant he would do anything he could to support his family.

He played for local team Rupel Boom, before moving to Lierse and then Anderlecht in 2006.

Although he moved around as a youngster, one thing that was a constant was he was always the biggest player on the pitch.

His agent Mino Raiola revealed how people watching him at youth level didn’t believe he was his age and his mum used to bring his birth certificate to youth games.

“I was talking to his mother. Eventually she went to youth matches with birth certificate,” Raiola said in an interview back in 2017 to Swedish newspaper Expressen.

“She always ended up with other parents who did not think he was 12 or 14 years old. It was always a fuss that he scored three or four goals.

“He was bigger and physically strong, yes. But they screamed that it was not in the right age.

“So she took the birth certificate. He was born in Belgium, but they spread false reports he been born in Africa. ‘Here it is’, she said.”

A STAR IS BORN

A talent beyond his years, Lukaku became a regular for Anderlecht at just 16 – scoring 41 goals in 98 games for the club.

Chelsea splashed £17million on the teenager and signed him up on a five-year contract.

But with Fernando Torres, Didier Drogba, Salomon Kalou and Daniel Sturridge all vying for a starting place in the side, Lukaku found first team opportunities hard to come by.

Despite the Blues winning the Champions League in his debut campaign, he was left disheartened by his own personal involvement.

“It wasn’t me, but my team that won,” he said refusing to hold the trophy on the Allianz Arena turf after the famous penalty shootout win over Bayern Munich.

It would be elsewhere in England he would find success.

A LOAN TO PROVE HIMSELF

Chelsea were, at first, reluctant to lose Lukaku and insisted he went on loan to gain valuable first team experience. And he thrived away from SW6.

He ended the 2012-13 campaign with West Brom with a respectable 17 league goals.

Then at Everton, he followed that with a decent 15 strikes – helping the Toffees finish fifth and record their highest ever Premier League points total, 72.

It was no surprise that manager Roberto Martinez paid Chelsea £28million to make the deal permanent.

In his next three seasons, Lukaku would go on to score 20, 25 and 26 goals to cement his reputation as one of the Premier League’s top marksman.

Of course, a move to the Premier League’s most successful club was round the corner.

It took £75million plus add-ons to take Lukaku from Goodison Park to Old Trafford in 2017, as he looked to fill the departing Wayne Rooney’s shoes.

But, from the offset, many pundits seemed unconvinced Lukaku was the right fit for Manchester United.

This was even after he scored twice on his debut against West Ham in a 4-0 win, and netted 10 goals in his first nine appearances for the Red Devils – breaking Bobby Charlton’s record of nine in his first nine games.

His first touch was often questioned by fans, who just didn’t take to him.

Effectively, not feeling loved might’ve been the nail in the coffin for his United career.

Despite scoring 42 times in 96 games, Lukaku was told to pack his bags after the club accepted an offer of around £74million.

On his way out of the club, Manchester United legend Gary Neville questioned his professionalism and said he was overweight.

Although, he has always listened to the advice of Chelsea legend Didier Drogba when it has come to managing his career.

Determined to prove the doubters wrong, Lukaku arrived at the San Siro on a mission.

He accepted that he was top-heavy and listened to the club’s medical staff who devised a strict diet regime for him to follow.

Incredibly, he dropped a stone, began to look sharper and more importantly scored more goals than ever.

“Since I joined Inter I have changed my diet and I can say that I have never felt so strong,” he revealed.

“My diet consists of salads for lunch, a lot of chicken breast, Shirataki pasta.

“I don’t change my way of eating much, for how we play we must have a very strong physique, we run a lot: since I have followed this lifestyle I feel better on the pitch, I feel more reactive and faster.

“I love carbohydrates and I love potatoes, sweet potatoes and black rice, but I don’t eat a lot of pasta.

“I’ve always been an explosive player with muscles but Italy took me to another level. I have never felt so strong. I have reached another level, physically and mentally.”

Chelsea might not have got the finished product when they bought a teen Lukaku back in 2011.

But now he appears ready to end the club’s dreaded No9 curse.