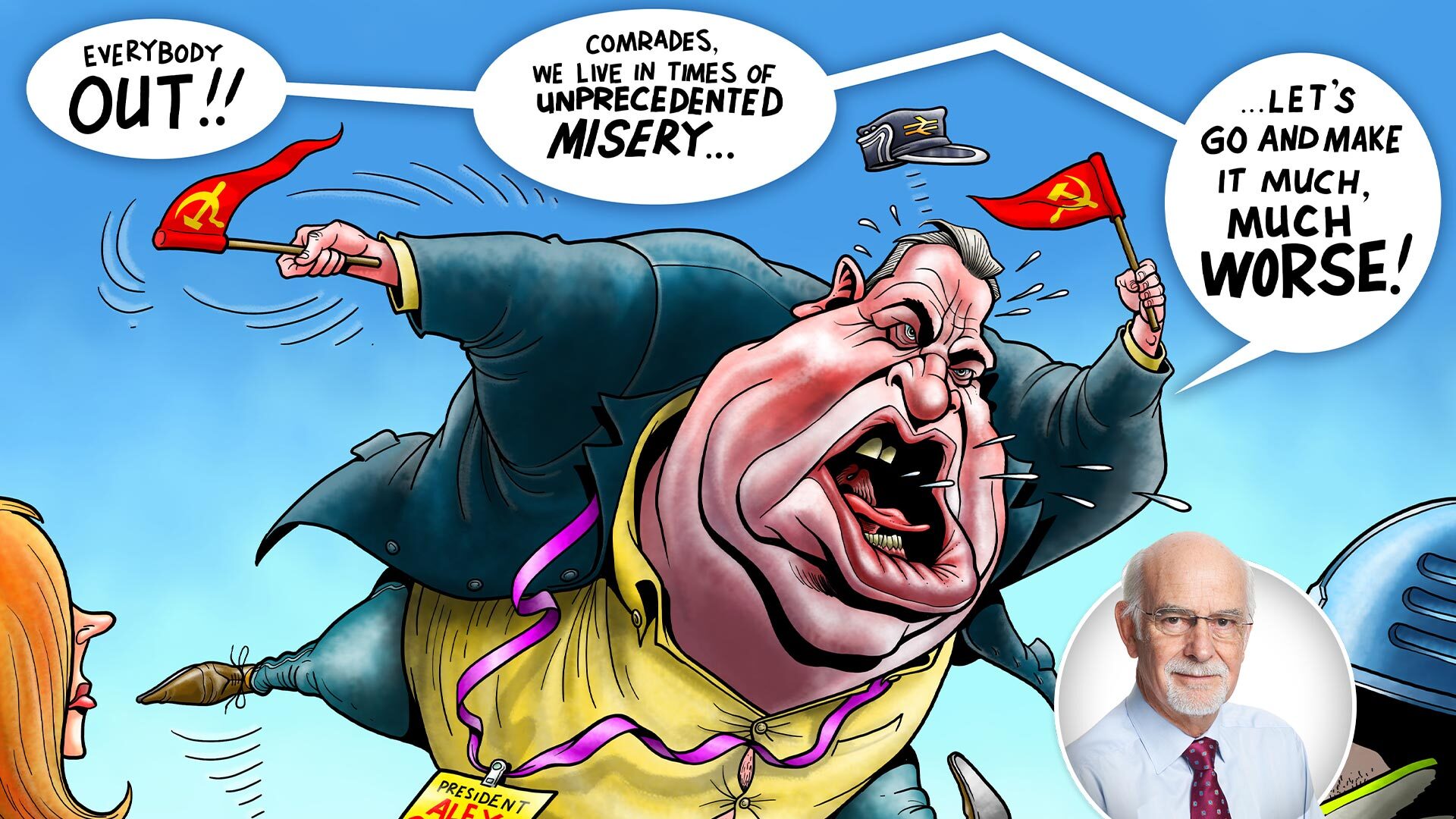 
FOR the lip-smacking Marxists plotting to paralyse Britain and sabotage the Queen’s Platinum Jubilee, this cost of living crisis is a gift from the gods.

It provides cover for direct action against Boris Johnson’s Tory government and the “believe it when we see it” promises which won them the election.

Militants have been itching for a fight from the moment BoJo walked into Number Ten.

Now they can use inflation, food shortages and a choice between heating and eating as an excuse for the biggest rail shutdown since the 1926 ­National Strike.

Public sector unions are stumbling over one another in the race to follow suit.

Communist Alex Gordon’s 40,000-strong RMT union is about to hit the nuclear button — moving in a single step from sabre-rattling to all-out war over pay freezes and job threats.

But this has little to do with conditions for workers already on £60,000 a year — more than double average earnings.

As in the 1980s, when King Coal Arthur Scargill mobilised the miners against Margaret Thatcher, this a bid to destroy a democratically elected ­government.

Belatedly, ministers have announced schemes to protect vital public services. Transport Secretary Grant Shapps will “draw up” laws demanding a skeleton staff to run the railways during a strike — a scheme first unveiled at the election more than two years ago.

What a farce. These provisions should have been already in place amid blatant threats of industrial anarchy.

Strikes involving essential services — railways, schools, prisons, hospitals — should be banned as a ­condition of employment.

Why should the long-suffering British public be thrown to the wolves before their government takes action to protect them?

A Government source says: “I think everyone will understand why, during the Covid pandemic, this was not a priority.”

As they say in America, a competent political leader should be able to “walk and chew gum at the same time”.

This is a national emergency. As a nation we are about to hit a wall of misery unprecedented in modern times.

We are in the foothills of a vicious wage/price spiral we never expected to see again.

Costs are outpacing earnings — up by more than 11 per cent, according to the respected Retail Prices Index.

Households may soon be paying £3,000 a year to heat and light their homes.

Pay demands are chasing to catch up.

No government could have prevented this crisis completely.

Yet spiteful Corbynista union barons have chosen this moment to “bring the country to a standstill”.

In an act of sheer malice, Tube staff earning up to £100,000 a year will shut stations near Buckingham Palace as crowds descend on London to celebrate the Queen’s ­Jubilee.

Why should rail barons still be able to hold us all to ransom over driverless trains four decades after strike-happy print unions lost a similar war against new technology in Fleet Street?

Mr Shapps warned the strike could put passengers off rail travel at a point when networks were already on “financial life support” after Covid. “We very much hope they will wake up and smell the coffee,” he said wistfully.

These Lefties are on a power trip, and government threats won’t stop them now.

Predictably — and disgracefully — Labour leader Keir Starmer has nothing serious to say about this rampant ­bullying.

His mealy mouthed appeal for strikes to be called off was slammed yesterday by a former comrade.

“Make no mistake, hardline unions are the cancer at the heart of the far Left — and have a significant and malign influence on Labour,” stormed ex-Labour MP Ian Austin.

“Sir Keir ought to face down the transport unions and denounce the chaos they are planning — and distance ­himself from other unions threatening action.

“Instead of standing up to the hard Left saboteurs, Sir Keir still indulges them.

“The blunt truth is that the public will never vote for ­politicians who haven’t got the strength to face down the unions.”

HATS off to Priti Patel for battling through hell and high water against leftie lawyers, shroud-waving charities – and critics within her own party – to curb the flood of illegal cross-Channel migrants.

Some of those already here say they would rather be sent home than to Rwanda.

This is the perfect example of “nudge theory” in action – encouraging sensible behaviour by suggestion rather than compulsion.

Once the thousands waiting on the French coast ­realise the Home Secretary is not bluffing, the evil ­process of criminal people-smuggling should dwindle to a standstill.