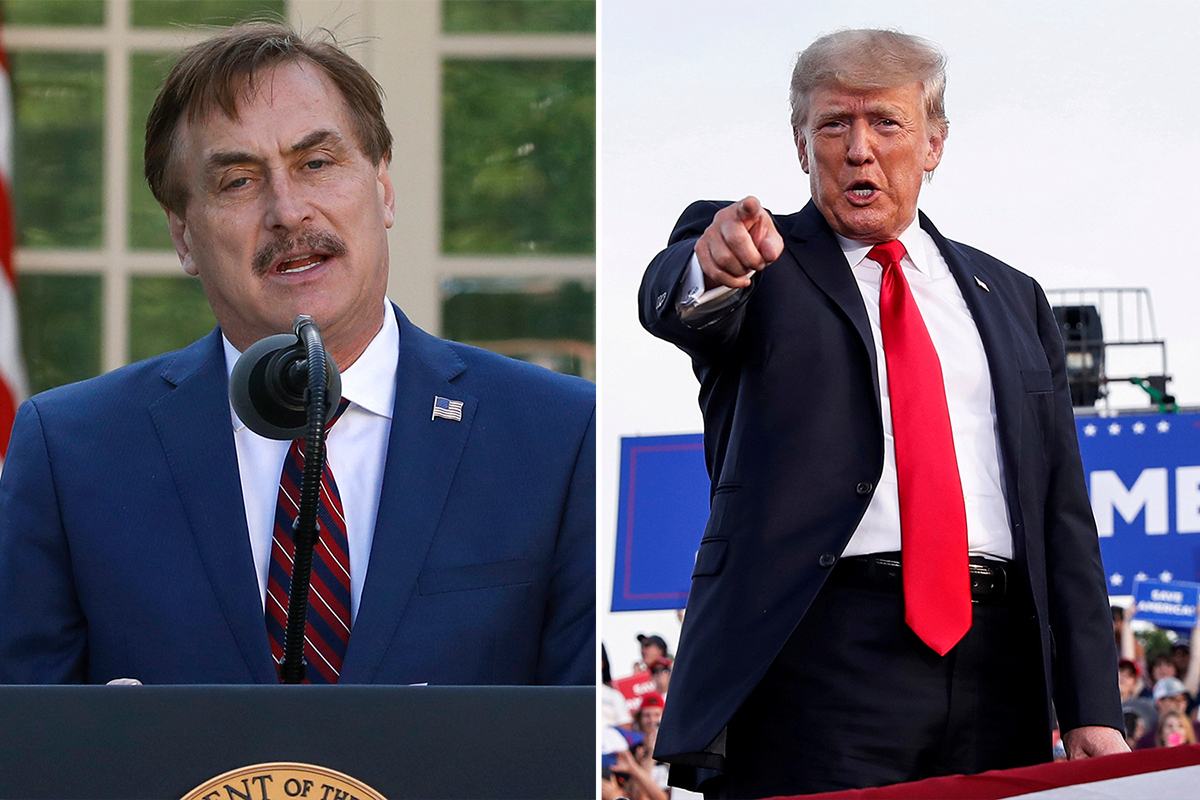 
SECURITY officials have warned of violence as QAnon conspiracy theorists remain wedded to baseless claims that Donald Trump will be reinstated as president today, reports say.

Diehards believe unproven allegations that the 2020 election was “fraudulent” and think Trump will be catapulted back into the Oval Office.

Some supporters have bought into unsubstantiated claims peddled by MyPillow CEO Mike Lindell that Trump is set to be reinstated as commander-in-chief.

In June, he jubilantly declared that the Republican’s return to power would bring about the “greatest rebirth in US history”.

He told Worldview Weekend Broadcast Network: “The morning of August 13, it will be the talk of the world. Hurry up, Let’s get this election pulled down.”

He claimed the “communists” would be ousted from power and the results of “down-ticket” senators allegedly will be flipped.

The rumors gained momentum at such a speed as they were circulated online, prompting Homeland Security officials to issue a public safety notification, according to ABC.

A bulletin reportedly stated: “As public visibility of the narratives increases, we are concerned about more calls to violence.

“Reporting indicates that the timing for these activities may occur during August 2021, although we lack information on specific plots or planned actions.”

Joe Biden remains president while Trump endorses potential congressional candidates at rallies as he mulls over whether to run for the White House in 2024.

This is despite Lindell’s proclamation that Biden and Harris will no longer be in office by the second week of August.

A seven-point plan was handed out to attendees at the Conservative Political Action Conference in Dallas, detailing how Trump would rise to power once again.

The plot blasted the 2020 election results and claimed that Trump would be reinstated after they “correct the official record.”

It stated Trump will reclaim “his rightful place as US President” after they place him “into the line of Presidential succession.”

Trump would take Pelosi’s role as House Speaker and would call a vote to impeach, charge, and remove Biden and Harris.

Rep. Marjorie Taylor Greene, who has since distanced herself from the QAnon conspiracy theory, rubbished reports that Trump will be reinstated in August.

She told Steve Bannon’s War Room Pandemic show: “I want people to be careful in what they believe.

“It’s going to be very difficult to overturn the 2020 election and so I’d hate for anyone to get their hopes up thinking that President Trump is going to be back in the White House in August.

“Because that’s not true. I’m telling you as a member of Congress – that’s a very difficult thing to make happen.”

Lara Trump poured cold water over the claims that her father-in-law would be upping sticks from his secluded Mar-a-Lago resort and returning to Washington DC this month.

She told Fox News: “There are no plans for Donald Trump to be in the White House in August.

“Maybe there’s something I don’t know [but] I think that’s a lot of folks getting a little worked up about something just because there wasn’t enough pushback from the Republican side.”

None of the prophecies the conspiracy group believes in have come true.

They thought Trump’s “inauguration” would take place on March 4 – when no president has been sworn in on the date since 1933.

March 4 was believed by some QAnon fans to be a false flag trap orchestrated by Antifa.

The baseless claims circulated online, prompting the House to cancel its March 4 session amid fears that the scenes of January 6 would be repeated.

The falsehood stemmed from the “sovereign citizen” movement that believes in 1871 – a law that was passed which turned the US into a corporation, disregarding the American government of the founding fathers.

And fact-checkers debunked claims that Biden’s inauguration had been canceled in January.

An article titled “Inauguration Cancelled, Trump Remains in Office” was published and featured a false statement claiming Trump had invoked the Insurrection Act. The Republican never invoked the 200-year-old legislation.

QAnon supporters are not just known for their theories relating to former president Trump.

The right-wing group alleges that cannibals and pedophiles secretly control the world and have been involved in a number of violent incidents.

They also claim a worldwide network of celebrities and politicians are part of a child sex-trafficking ring.

It’s estimated that around 15 percent of Americans support the main sweeping allegation, according to data from the Public Religion Research Institute.

The bizarre theory originated in December 2016, when Edgar M.Welch entered a Washington DC pizza parlor and demanded to see a basement that did not exist.

According to NBC, he believed the restaurant was part of a child sex ring, a conspiracy known as Pizzagate.