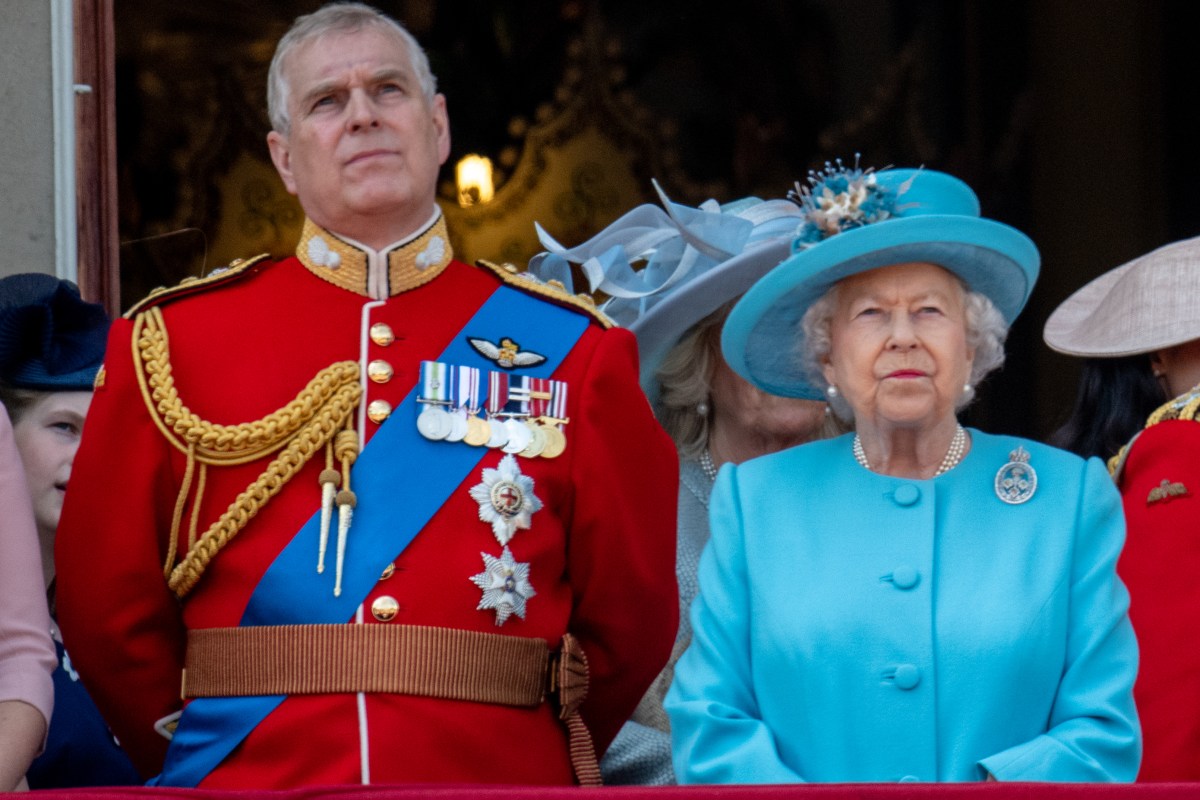 
PRINCE Andrew will not be part of the Queen’s Platinum Jubilee Trooping the Colour next year amid his sex abuse lawsuit, sources claim.

The Duke of York already missed Her Majesty’s 95th birthday parade in June over concerns about his relationship with late paedophile Jeffrey Epstein.

Andrew faces a lawsuit for allegedly raping a 17-year-old girl trafficked by Epstein, who killed himself in prison in New York in 2019.

He is being sued by one of the disgraced American financier’s victims, Virginia Roberts Giuffre.

The now 38-year-old has accused him of sexually abusing her at Epstein’s Manhattan home, on his private Caribbean island, and at socialite Ghislaine Maxwell’s home in London.

Her lawsuit came almost two years to the day after Epstein, 66, was found dead in jail while awaiting trial for conspiracy and child sex trafficking charges.

Andrew, 61, has always denied any allegations of sexual contact with Ms Giuffre or that he had any knowledge of Epstein’s wrongdoing.

But royal sources said on Thursday there were “difficult decisions” to be had about Andrew’s military titles and any future public duties – including her birthday parade during her 70th year of service.

One aide told The Telegraph: “He will not be able to take part in Trooping the Colour next year if the Epstein scandal is still hanging over him, and no one can see this going away any time soon.

“He will have to be replaced. How could he possibly retain his military titles?”

Andrew is named as the only defendant in the 15-page suit, brought under New York state’s Child Victims Act, though Epstein and his former girlfriend Maxwell are mentioned frequently throughout.

It is the first time he has been subject to a lawsuit over the case since the allegations against him were made public ten years ago.

Ms Giuffre is seeking unknown amounts of compensation and punitive damages over the allegations.

Questions are now swirling about what is next for Andrew – with the Duke not enjoying the same diplomatic immunity held by his mum, The Queen.

US officials have previously said they are not seeking to extradite Andrew, and this may not apply to Ms Giuffre’s case as it is civil suit rather than a criminal prosecution.

However, Andrew may avoid ever setting foot in the US again.

The duke stepped back from public life in 2019 after his his BBC Newsnight interview in which he claimed to have “no recollection” of meeting Ms Giuffre, and gave an alibi of being at a Pizza Express birthday party.

However, the lawsuit likely means he will never return to frontline duties, even if he is cleared.

It’s now time for him to let the relevant organisations in the military know that, because of ongoing allegations and until his name is cleared or otherwise, he will stand down so as not to embarrass the nation.

Members of the Royal Family, including Prince Charles, are said to fear the damage his friendship with Epstein has already caused the monarchy is too great and there is no way back.

His military titles, including Colonel of the Grenadier Guards, Vice Admiral in the Navy and Commodore in Chief of the Navy’s Fleet Air Arm, would eventually have to be removed and redistributed, senior royal sources said.

A senior Navy insider told the Telegraph: “It’s now time for him to let the relevant organisations in the military know that, because of ongoing allegations and until his name is cleared or otherwise, he will stand down so as not to embarrass the nation.”

And a royal source said: “It is difficult to envisage how the Duke will be able to retain his military titles.

“At some point, if and when it is accepted that he will not return to public life, there will be some difficult discussions to be had.”

He could even be stripped of his “His Royal Highness” status, with Nigel Cawthorne, author of Prince Andrew: Epstein, Maxwell and the Palace, telling Newsweek: “There are too many legal questions surrounding the prince and it is increasingly doubtful that he can hold on to his HRH status.”

Court documents claim Ms Giuffre was “lent out for sexual purposes” by convicted sex offender Epstein, including while she was still a minor under US law.

The Duke allegedly engaged in the sexual acts without Ms Giuffre’s consent, while aware of her age and while “knowing that she was a sex-trafficking victim”, the documents claim.

The docs add the alleged assaults “have caused, and continue to cause her, significant emotional and psychological distress and harm”.

“Prince Andrew’s actions, described above, constitute extreme and outrageous conduct that shocks the conscience,” the lawsuit stated as it described the emotional distress suffered by Ms Giuffre.

“Prince Andrew’s sexual abuse of a child who he knew was a sex-trafficking victim, and when he was approximately 40 years old, goes beyond all possible bounds of decency and is intolerable in a civilised community,” it added.

In a statement Ms Giuffre, who lives in Australia, said: “I am holding Prince Andrew accountable for what he did to me.

“The powerful and the rich are not exempt from being held responsible for their actions.”

The powerful and the rich are not exempt from being held responsible for their actions.

Her dad Sky Roberts, 65, said he was “proud” of his daughter and has told Andrew: “You should be ashamed of yourself.”

Ms Giuffre first accused the Duke of sexual abuse in public documents in December 2014, as part of a case brought by alleged Epstein victims.

She claimed that she was instructed by Epstein and Maxwell to have sex with Andrew on three occasions in 2001.

Buckingham Palace “emphatically” denied the claims, as has Maxwell, stating that the allegations were “false”.

Met Police chief Cressida Dick has made it clear Andrew is “not above the law” and the matter is being investigated.

The lawsuit includes a copy of the photo of Andrew standing beside Ms Giuffre in London, and flight records from Epstein’s private planes.

She claims that they indicate that she was a frequent passenger on the jet, and flew to destinations in the US and other countries whilst under 18.

The crisis could get much worse as a second sexual assault claim could be made against him.

Epstein’s former PA Johanna Sjoberg claims the Duke of York groped her breast when she was 21 years old.