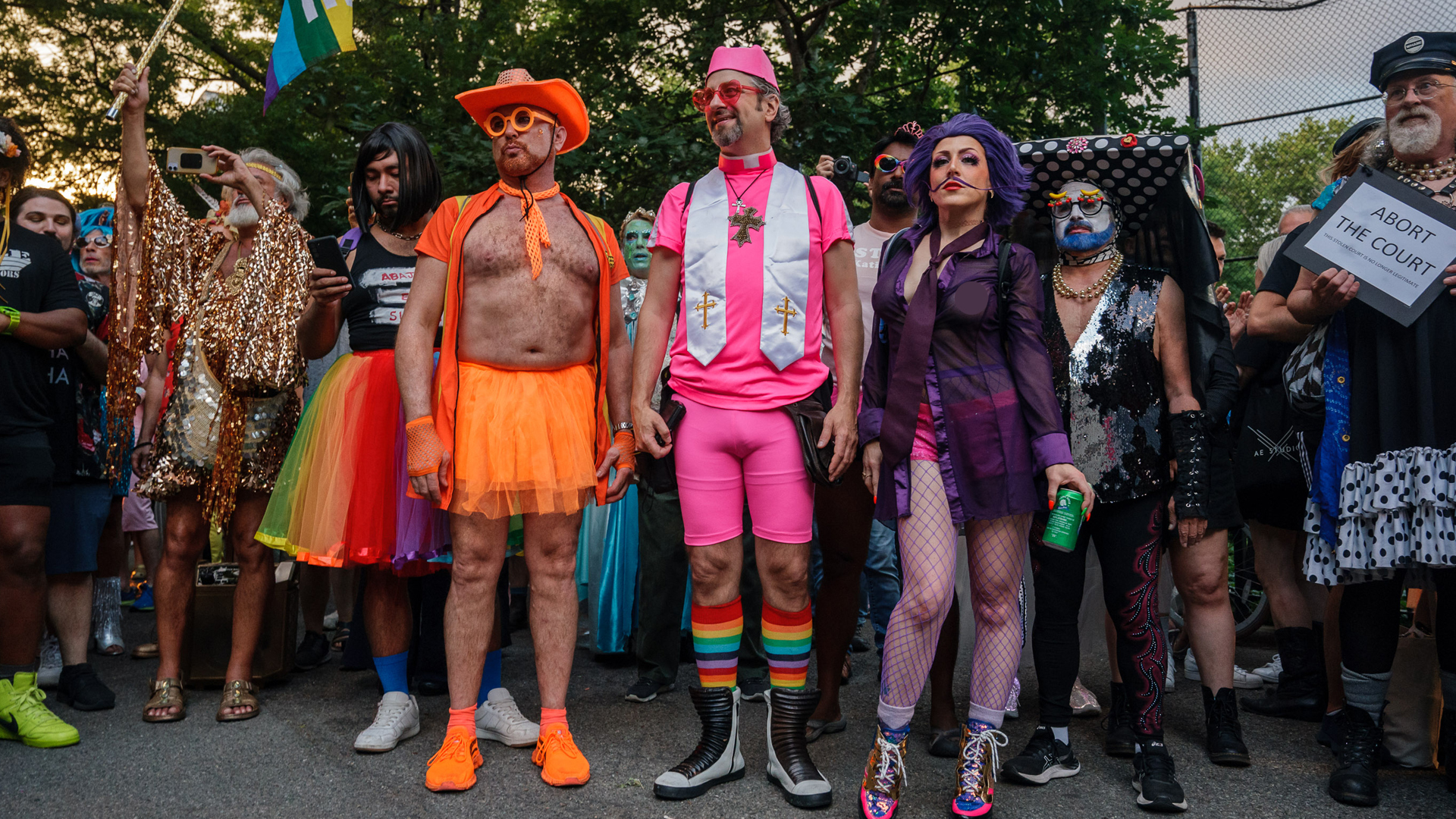 
PRIDE weekend kicked off on Friday with the annual Drag March in New York City.

The event was founded in 1994 by Gilbert Baker, the creator of the rainbow flag, Brian Griffin, aka Harmonie Moore Must Die, and the Sisters of Perpetual Indulgence, after the main pride event banned drag queens, fearing backlash from their corporate sponsors.

Many participants at the Drag March expressed their outrage over the Supreme Court’s overturning of Roe vs. Wade and voiced fear about the decision threatening LGBTQ+ rights in the future.

In a concurring opinion, Justice Clarence Thomas wrote that the Supreme Court should “reconsider the rulings that protect contraception, same-sex relationships, and same-sex marriage.”

The marchers remained defiant at this potential threat.

“SCOWTFUS” another wore around their neck.

A different queen sported a pink headband with the words “Roe Your Vote” and a heart pierced with a hanger, symbolizing the days when women had to perform unsafe abortions at home.

“It’s still just a Drag March, you may applaud,” the rainbow banner starting the event read.

Police were even seen posing with queens.

The march, which is still not sponsored or officially affiliated with Pride, walked from Tompkins Square Park to the historic Stonewall Inn in Manhattan.

Protesting calls over the years have included “God is A Lesbian,” and the Mary Tyler Moore theme song.

Baker, who died in 2017, had that year’s march dedicated to him.

Harmonie Moore was still an active presence at this year’s march.

The Gothamist reports that Moore introduced herself as, “Harmonie Moore as in ‘How many more women must die of botched illegal abortions due to the fascist injustices of the American right-wing and psycho Christian lap dogs’.”

The outlet reported that chants of “Abort the Court”  were heard throughout the march.

Ending the walk at the Stonewall riots is symbolic.

Riots broke out in New York in the early morning of June 28, 1969, after cops raided the Stonewall Inn.

At the time New York had hardened laws against homosexuality, barring LGBTQ+ people from being sold alcohol or “ displaying homosexually” in public.

The Police frequently raided Stonewall and other gay bars.

However, in June 1969, patrons refused to go quietly, gathering outside the bar, chanting “gay power” and “gay pride.”

The protests lasted for several days.

An 83-year-old bartender at Stonewall recently recounted the riots to UK Times.

People always ask, ‘Were you afraid?’ I always go, ‘Hell no!’

“I never threw a rock. I never set a police car on fire … it was just a whole lot of fun.”

“We had no idea that it would become this significant thing because we were so used to raids.”

“We didn’t know that was going to be the raid of all raids.”