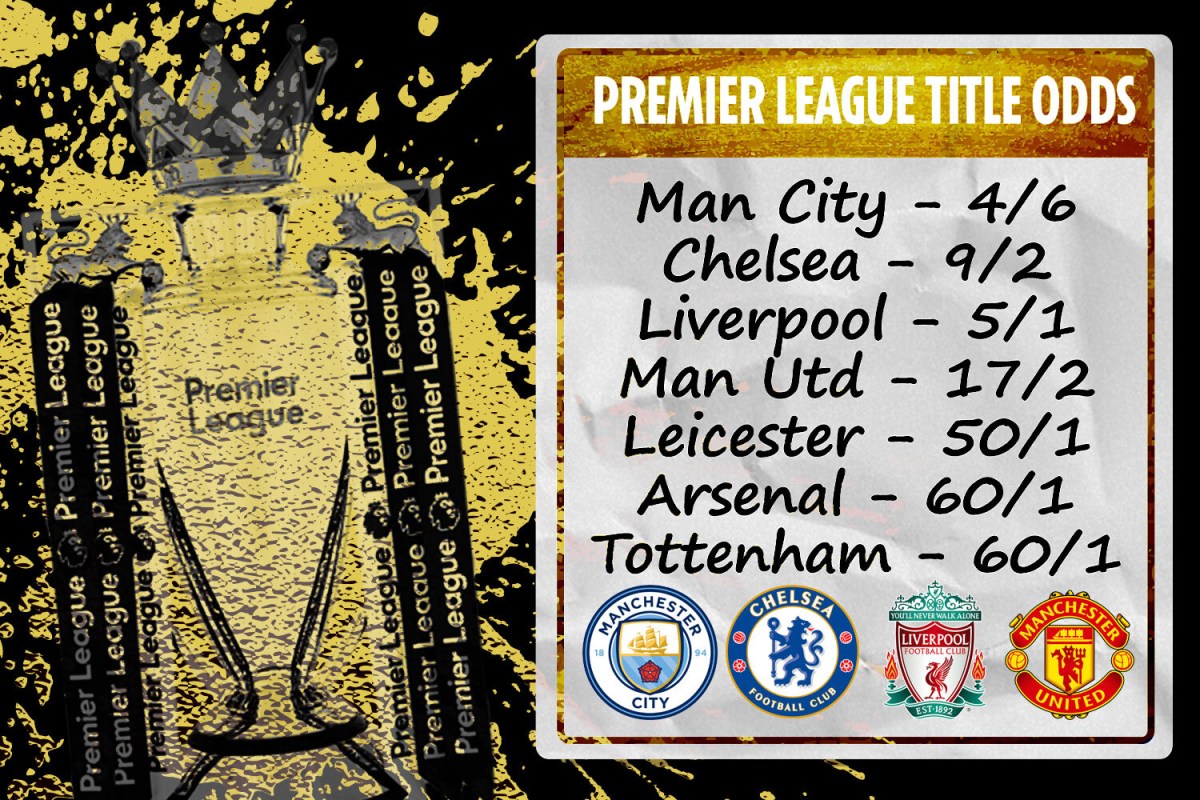 The Citizens won their fifth top-flight title in nine years last season and are available at 4/6 to defend their crown.

Pep Guardiola’s side won 27 of their 38 fixtures, scoring a league-high 83 goals and finishing 12 points above rivals Manchester United.

And City have strengthened their ranks considerably with the arrival of £100million England star Jack Grealish.

City chiefs are expected to open their chequebooks again before the transfer window closes on September 3 by signing Tottenham talisman Harry Kane.

Should the pair arrive at the Etihad Stadium – their odds could drop sharply.

Chelsea are second-favourites for the coveted prize at 9/2.

The Blues were a different animal under Thomas Tuchel, who guided them to a fourth-placed finish and historic Champions League success.

The German boasts a 63% win percentage at Chelsea, winning 19 of his 30 games in charge and conceding just 16.

Tuchel and his search for a new centre-forward is also close to completion with Romelu Lukaku poised to sign in a deal worth £97.5m.

The pair were sidelined for virtually the entire season as the Reds managed to secure a third-placed finish.

But the defensive couple along with new signing Ibrahima Konate are back ahead of their season opener against Norwich.

Manchester United are fourth in the betting and have seen a slight shift in price since the bookies revealed their title odds.

The Red Devils were 9/1 to win their first Premier League title since 2012/13 but are now 17/2 after the arrival of Jadon Sancho and the imminent signing of Real Madrid centre-back Raphael Varane.

Best of the rest

Brendan Rodgers’ Leicester are rated as ‘best of the rest’ with Patson Daka, Boubakary Soumare and Ryan Bertrand having arrived for a combined £45million.

The Foxes were priced at 33/1 but the strengthening of the sides above them paired with the uncertainty surrounding the future of James Maddison has seen them drift to 50/1.

North London duo Tottenham and Arsenal have also drifted in the betting and are now locked together at 60s.

Commercial content notice: Taking one of the bookmaker offers featured in this article may result in a payment to The Sun. 18+. T&Cs apply. Begambleaware.org

A responsible gambler is someone who:

*Min stake £5, min odds 2.0. Only deposits made using Cards or ApplePay will qualify. Free bets are awarded after the qualifying bet has settled, valid for 30 days, and must be used on multiples with 3+ legs. Max £20 in free bets. T&Cs apply. 18+ BeGambleAware.Org