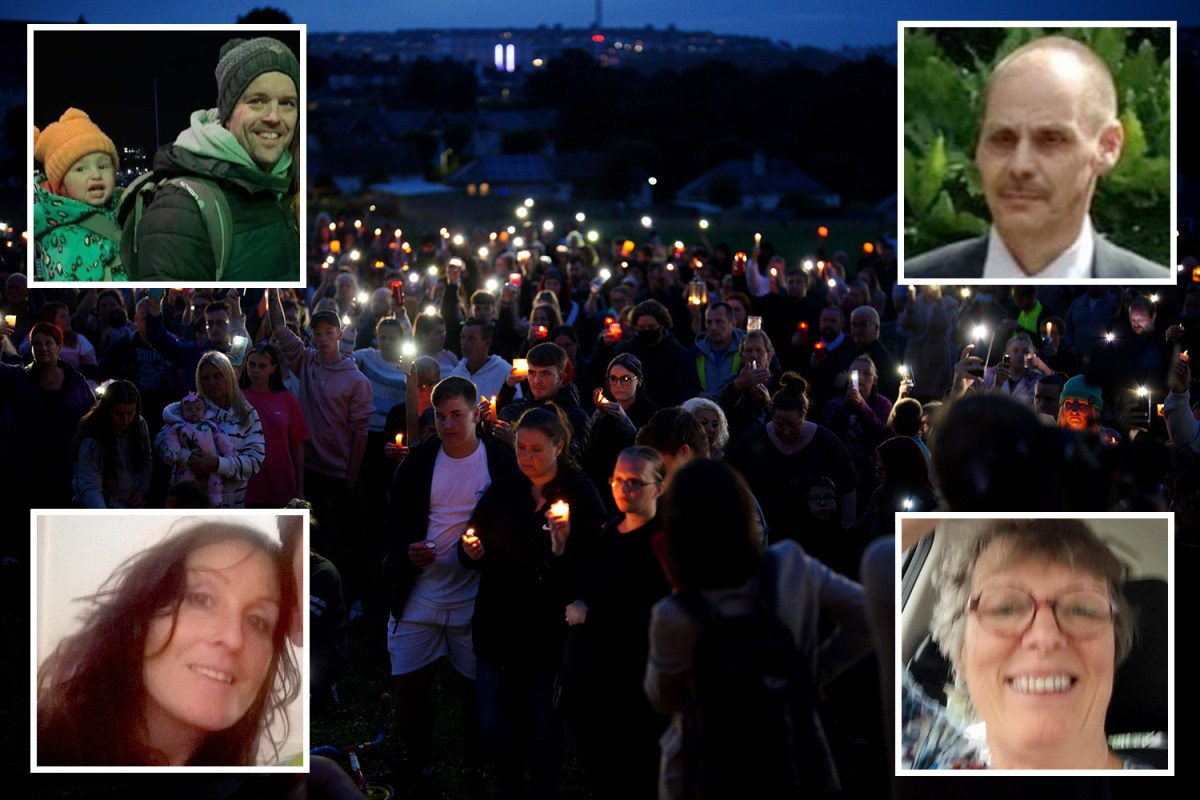 
HUNDREDS of people gathered to pay tribute to those who were shot dead by Jake Davison at a vigil in Plymouth last night.

Mourners placed candles and flowers at North Down Crescent Park in Keyham, Devon, close to where five people were murdered in the grim shotgun rampage.

Davison, 22, shot his own mum before randomly killing four other people and then turning the gun on himself in Plymouth.

Lee Martyn, 43, and daughter Sophie were among five people slaughtered as Davison opened fire on a quiet cul-de-sac on August 12.

Mourners turned out to pay their respects to those who lost their lives in the tragic mass shooting.

Many people lit candles to illuminate the darkness as the community came together.

Plymouth MP Luke Pollard alongside Keyham Neighbourhood Watch were amongst those organising the event, which began at 9pm.

Residents placed dozens of floral tributes at the scene, near the police cordon on Wolseley Road, while hundreds of people have taken to social media to pay their respects and share messages of condolences.

“My mum lost her world. My kids and brothers and sister’s kids lost their granddad.

“Each and every one of us will miss him deeply, RIP dad you will be missed, love you.”

Mum-of-one Kate was killed by Henderson Place before Davison turned the gun on himself.

“She and her husband John were retired. What happened to Kate and all those poor other victims is atrocious.”

Tributes have also flooded in for tragic dad Lee, who had adopted Sophie with his wife around two years ago.

It is understood they had been returning home when Davison opened fire using the legal firearm, with Sophie pushing a toy pram.

One friend said: “Lost for words. You was such a kind selfless gentleman who put everyone else before yourself we have shared many memories together.

“I will never forget the things in life you have done for me, you will forever be in my heart Lee Martyn”.

He said at the time: “We finally adopted Sophie after nearly 15 months! Game changer.”

Davison unleashed the rampage at around 6.11pm when he stormed a home on Biddick Drive.

Gunshots erupted as he shot mum Maxine, who suffered from cancer, before he skulked down the street holding a pump action shotgun.

Davison continued the spree by gunning down and killing Stephen Washington as he entered a park.

The chilling timeline was revealed yesterday in a press conference by Devon and Cornwall Police Chief Constable Shaun Sawyer.

CC Sawyer confirmed there is no know motive at present, adding: “We’ve never in my time had homicide followed by a rampaging firearms attack on random members of the public and then taking one’s life.

The Independent Office for Police Conduct, IOPC, has said it will investigate Devon and Cornwall Police over the matter.

The firearm believed to have been used by the gunman was legally held by him, Devon and Cornwall Police said.

It is understood cops were satisfied he was fit to possess a shotgun again after Davison agreed to attend an anger management course, despite posting angry rants online about firearms.

Thursday’s horror was the first “active shooter” rampage seen in the UK for 11 years since cabbie Derrick Bird murdered 12 people in Cumbria in June 2010.

Davison has been revealed as a right-wing crane operator obsessed with American gun culture.