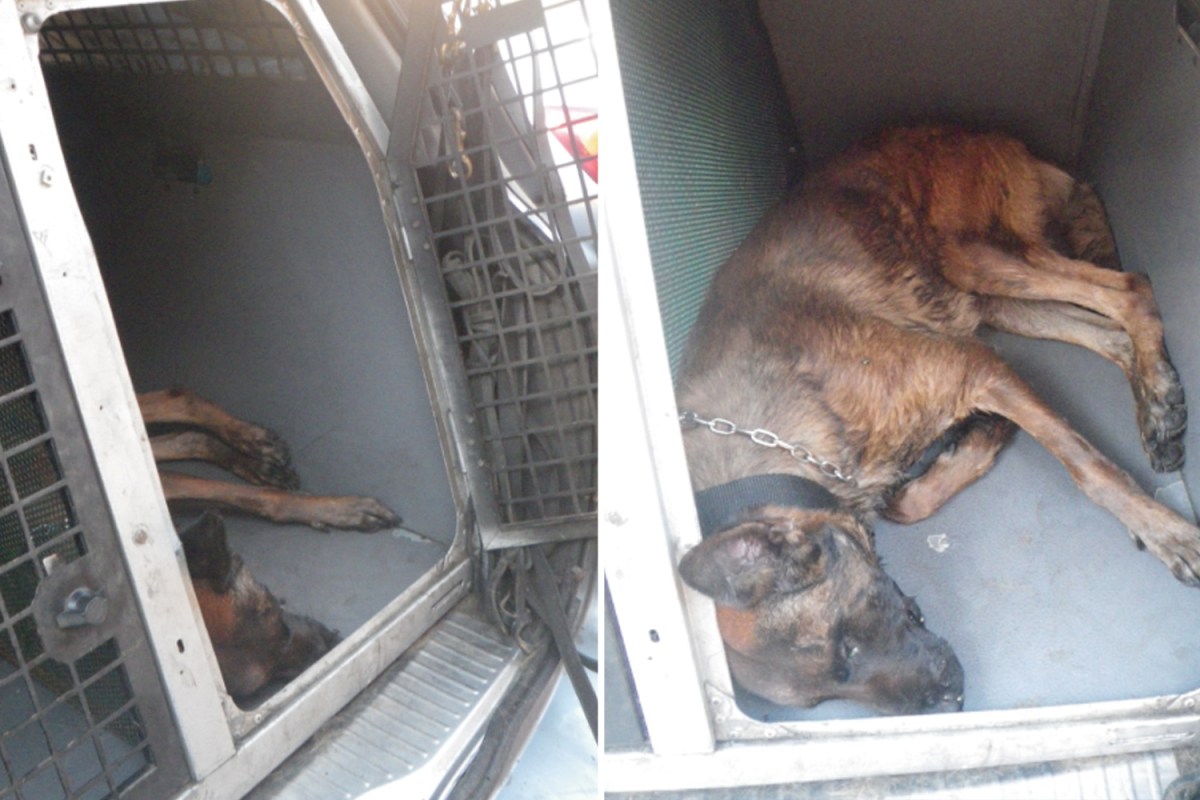 
TWO dogs were left to die in the boot of a scorching hot car after complaints about them barking.

Owner Richard Armstrong, 47, locked security pups Hector and Yardie in the back of his Vauxhall Astra for two hours as temperatures soared to 24C – but later walked free from court.

Police called to the scene found Belgian Malinois Hector already dead in his kennel with flies buzzing around his mouth.

Yardie, of the same breed, had collapsed but was still breathing.

Both were surrounded by diarrhoea and urine, with no evidence of water in either kennel – only just big enough for the dogs to stand in.

Vets described Yardie as a “heatstroke emergency” with a body temperature of 40.3C.

She also had muscle tremors and an irregular heart rate.

Police bodycam footage shows officers rushing Yardie to the vets, pouring water on her body in a desperate bid to cool her.

Vets gave her oxygen and fluids, but ultimately put her to sleep, with Armstrong’s permission, due to “neurological dysfunctionality”.

The vet said: “The dog appeared to be struggling to breathe. We applied cold towels every 10 to 15 minutes during the procedure.

“The nurse also sprayed the extremities with cold water to try and bring the temperature down.

“During the entire procedure the patient presented seizure activity, which was concordant with altered mental status.”

A sedative and pain relief was administered but she “began to vomit profusely” before twitching and making “uncontrollable movements”.

Video captured at the the scene shows Armstrong, a self-employed security dog handler, trying to explain to officers that his dogs had been in the back of his car with the boot door open and a fan running.

He said he had put them in there after complaints about them barking loudly at home.

Cops quickly contacted the RSPCA and officers attended the scene in Ilford,
East London, to launch an investigation.

Inspector Kate Ford said: “Police officers were already on the scene. I had spoken to one of the officers on route who was [taking] the female dog, Yardie, to a veterinary surgery at the Ilford Pets at Home.

“I was informed that when police had arrived at the Vauxhall Astra estate car, one dog, a male dog called Hector, was dead and Yardie was still alive.

“They had rushed her to the veterinary surgery but she was in very bad condition and it was looking likely that euthanasia was to be recommended.

“These dogs had been left in the vehicle for a period of time, possibly in excess of two hours and the temperature at that time this afternoon was around 24 degrees.”

The kennel was just about large enough for the dog to stand in but there would not have been room for him to turn or move around.

She added: “The kennel was just about large enough for the dog to stand in but there would not have been room for him to turn or move around.

“Mr Armstrong told me that there is an air conditioning system in the van that works from a separate battery and is independent from the ignition of the car needing to be on.

“He said that he’d left the boot door open but that the dogs tended to ‘jump up and down when they heard any noise’ and that this must have caused the boot to close, leaving the dogs shut in in the heat.

“He also thought the fan must have stopped.”

Armstrong landed a 12-month community order after being found guilty of causing unnecessary suffering to his pets at Ilford Magistrates’ Court on Wednesday.