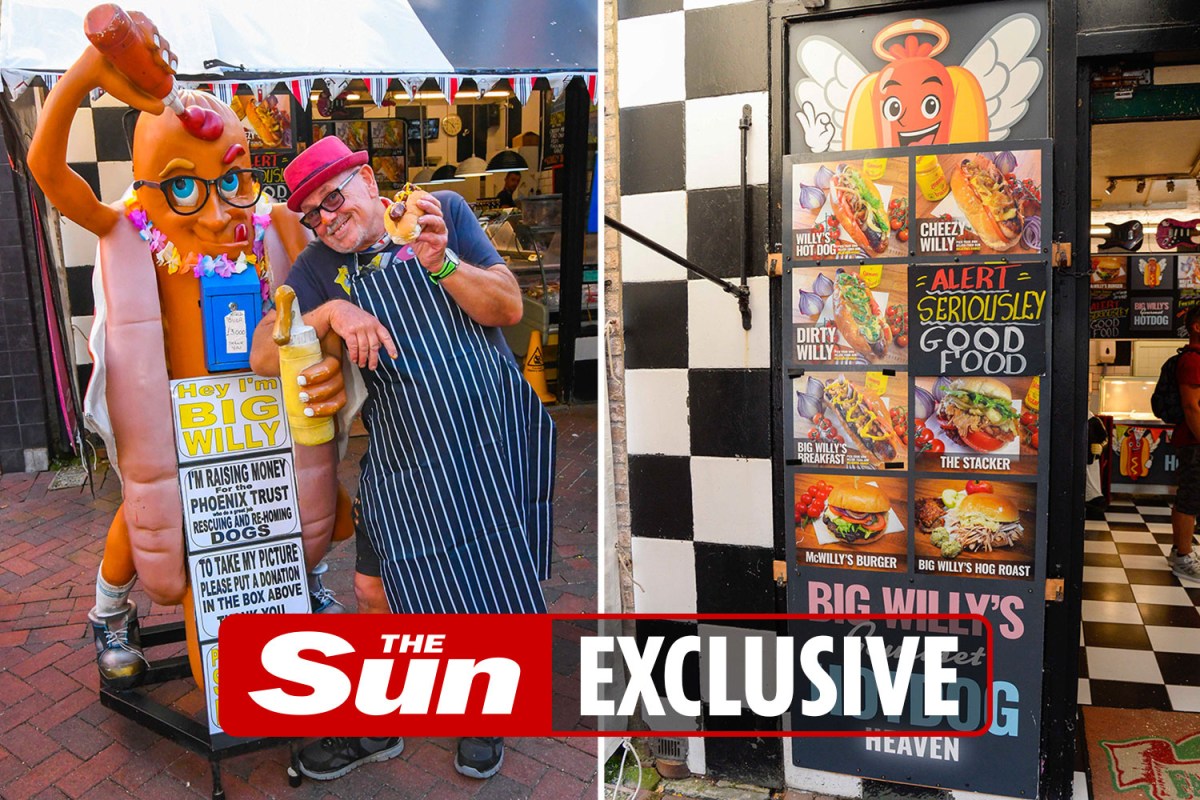 
A CHEEKY sausage shop selling “Big Willys” has left Brit holidaymakers blushing as they say it “belongs in Magaluf”.

Red-faced parents have faced awkward questions from their kids after being confronted with a 5ft sausage outside the butchers and the X-rated menu.

But the owner has hit back at criticism – insisting it’s “postcard humour” and for a good cause.

Customers can even tuck into a ‘Big Willy’s Breakfast’.

But parents reckon the tongue-in-cheek giant sausage and meaty treats should not be on prominent display outside the high street shop.

One even compared it to “something found in Magaluf”.

The mum-of-two from Surrey said: “I can’t believe it.

“We were on holiday when my six-year-old daughter rushed over to look at the giant sausage and proceeded to read, ‘Don’t sit on my big willy’ out loud.

“It was all a bit awkward and embarrassing.

“You’d have thought we were on the main strip in Magaluf, not in Weymouth high street.”

But the Sausage Factory owner has hit back at woke customers, and said “it’s all a bit of fun.”

You’d have thought we were on the main strip in Magaluf, not in Weymouth high street

Dennis Spurr, 78, has been running the shop in the tourist hotspot for 25 years and said he’s never had a single complaint.

He told The Sun: “I’m known for being bonkers, Big Willy is his name, if you read the board, it says please do not sit on my Big Willy.

“We do a Cheezy Willy a Dirty Willy and so on, it’s just a play on words, I’m totally bonkers the whole shop is bonkers, it’s just my style.

“We’re always busy, it’s part of all the fun of the shop.”

Dennis has run The Fantastic Sausage Factory since 1992 and sells artisan sausages and burgers.

It’s postcard humour, I would not upset anyone in the world it’s not my style.

‘Big Willy’ – the shop’s giant hotdog mascot – stands outside in the street, and he asks passers-by to make a donation to a dog charity in return for posing for a photo with the supersized wiener.

The shop also sells a range of hotdogs with naughty names, including a cheese topped ‘Cheezy Willy’ and a ‘Dirty Willy’ smothered with onions, tomatoes and relish.

Mr Spurr told The Sun Online: “The thing is it’s up to the mums, he’s been there for five years, his name is Big Willy and if you want to read it like that then you can.

“It’s postcard humour, I would not upset anyone in the world it’s not my style.

“He must be the most photographed Willy in Weymouth.

“I’d be very disappointed if people were getting upset over it.

“His name is Willy and he is a hotdog that is 6ft tall, therefore he is big. So that’s why we call him Big Willy.

“If people choose to read it wrong it’s up to them, it’s postcard humour, it’s tongue in cheek.

“If in this day and age if you’re offended by something like that, then it’s outrageous.

“With all the Covid and all the misery in the world, I rile myself up and try my best to cheer everybody up.

“If they don’t like it well I’m not going to be offended by it, but it’s bonkers.”

It comes just days after woke foodies want the word “curry” to be cancelled over claims it is rooted in British colonialism.

They said it was coined by white people too lazy to learn the real names of Indian dishes.

Pat Chapman, 80, of the UK’s Good Curry Guide, fumed: “Oh my God, what next? It is a crazy idea that something now ought to be cancelled because of its supposed links with the past.

“The word curry has served us well for many, many years.”

Tory MP Marco Longhi added: “What’s wrong with these people? There are so many generic food terms. Is pizza racist?”