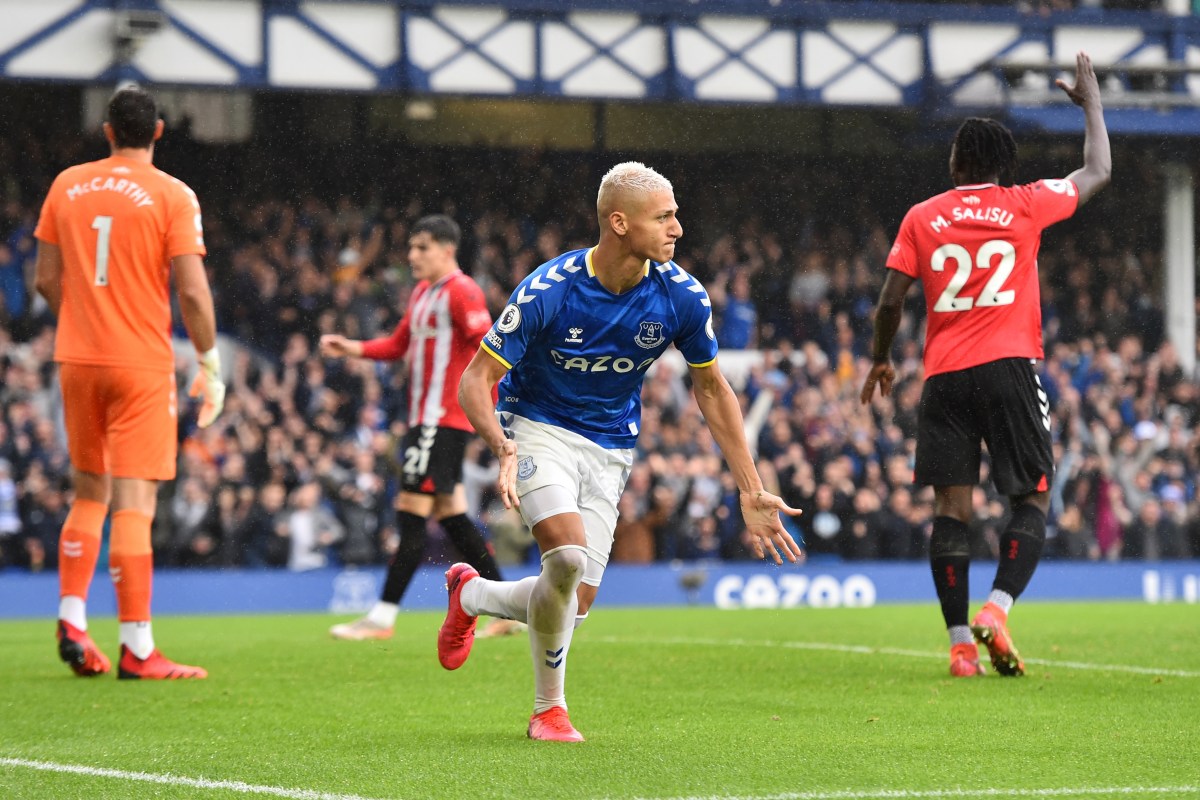 
BOOED at half-time and cheered to the rafters at the end, it’s going to be a hell of a ride for Rafa Benitez at Everton.

A quick-fire start was essential to pacifying the ex-Liverpool boss’ haters.

After Adam Armstrong bagged a debut goal for Southampton following his £15million move from Blackburn, the stuff of Benitez’ nightmares was playing out.

As the derision from pockets of Goodison Park rained down at the break, it was hard to see how the Spaniard could make this work.

But then, within two minutes of the restart, Richarlison equalised and the grand old stadium was alive.

And if it was rocking after Abdoulaye Doucoure’s 76th-minute equaliser, it was virtually shaking when Dominic Calvert-Lewin wrapped it up five minutes later.

With ‘It’s a Grand Old Team’ reverberating around all four corners, Benitez may just have a chance.

With a host of first-teamers missing and having been given the measliest of pots to p**s in to strengthen, it was never going to be an easy start.

But as Toffees fans piled into the pubs afterwards to dissect the bizarre sight of Benitez in the home dugout, a few may already be softening their stance.

The hosts had five players missing through Covid and were without James Rodriguez, Ben Godfrey, Andre Gomes, Moise Kean and Jean-Phillipe Gbamin.

Benitez, branded a ‘fat Spanish waiter’ by his own fans during their final friendly, emerged to warm applause and clapped all four corners of Goodison Park.

And it was a positive start, with Allan stinging Alex McCarthy’s palms before Calvert-Lewin headed Demarai Gray’s excellent cross over.

But 22 minutes in and they were behind after a moment of madness by the dawdling Michael Keane.

Far too relaxed, the Toffees defender pondered on the ball too long to allow Che Adams to pounce.

Nicking in and stabbing forward, Armstrong was one-on-one with Jordan Pickford and stroked into the top corner as though he has been playing at this level his whole career.

Emboldened, the Geordie – sold from Newcastle by Benitez in 2017 – only turned up the pest-dial, giving Keane and Mason Holgate a torrid time.

But those jeers turned into cheers within two minutes of the restart when Richarlison – fresh from landing an Olympics gold medal – pulled level.

A corner was dealt with but cleared only to Andros Townsend at the edge of the box, who nodded back into the mix.

As Mohammed Salisu was slow to react, Richarlison was quick as a flash to latch onto it and poke home first time.

The Toffees were flying now, with Townsend and Gray whipping in teasing crosses at will.

And they were finally ahead through Doucoure when he lashed a fierce effort into the roof of the net after a quick free-kick from Allan was worked well down the right.

And Calvert-Lewin made it a carnival atmosphere five minutes later with a diving header.

Alex Iwobi and Richarlison linked up beautifully down that right side with the latter putting in a peach of a ball for the England striker to bundle in.