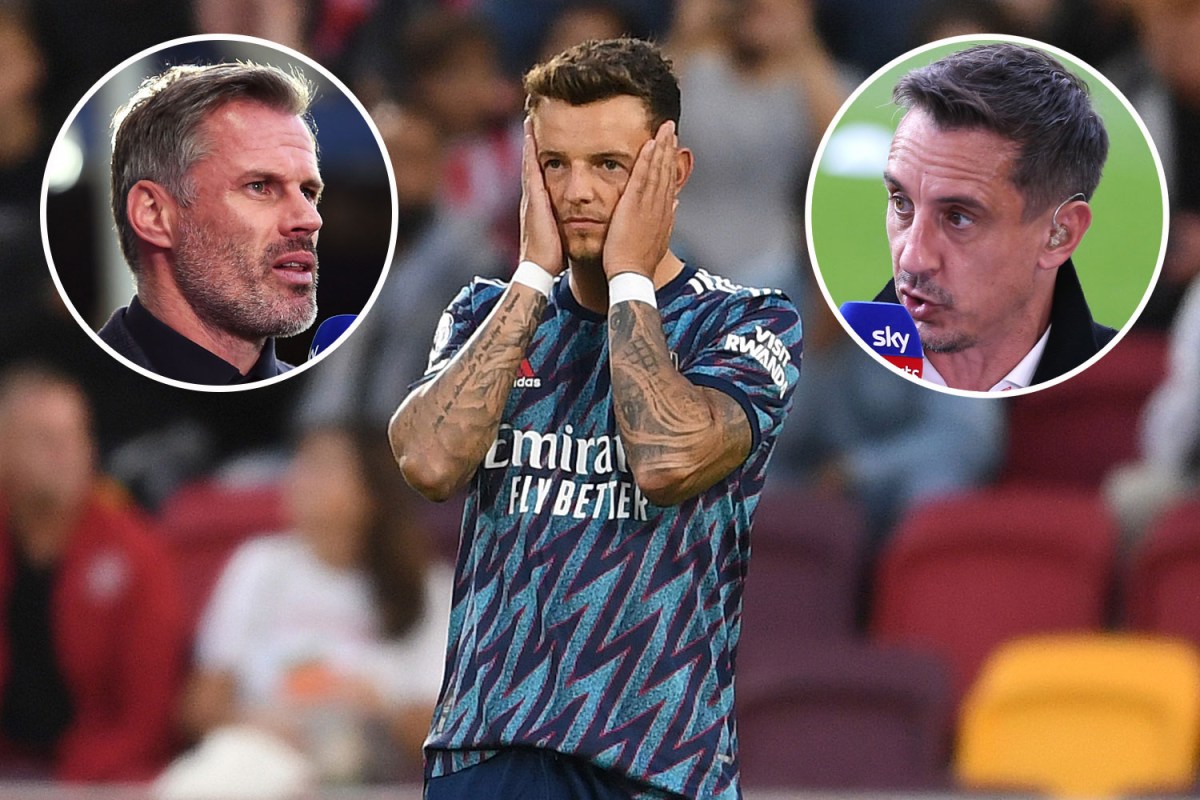 The £50million summer signing from Brighton made his competitive debut last Friday in the north Londoners’ Premier League opener against Brentford, which they lost 2-0.

White, 23, had a debut to forget as he was run ragged by Ivan Toney and was at fault for Christian Norgaard’s second-half header.

And Sky Sports pundit Gary Neville reckons the defender could be identified as a potential weak link due to his height and ability in the air.

He said: “I said before the game that nobody is going to remember at the end of the season how many good passes Ben White has made.

“I actually think most centre-backs now, in top six clubs, are competent on the ball. They get it out their feet, play good passes, they can play diagonal switches.

“So we’ve got to stop saying he’s good on the ball because every centre-back in the top-six is.

“The difference will be whether he defend his goal. Can he make a difference to this Arsenal team?

“And it’s too early. We’re talking about tonight but lets be clear, those Ivan Toney clips, those five or six clips where he’s got nudged around, that’s going to be the pre-match analysis of everyone who is going to play Arsenal.

“If you’re playing Arsenal next week, you’ll be thinking, ‘We’ll stick it on him, we’ll put it up against him, we’ll put our big man on him on set-pieces’, and he will be a target.

“He’s got a £50m price tag and he’ll have to come through those early months of pressure and expectation and people like us talking about him.

“That’s what happens. This is not an attack on Ben White, it’s just a reality club that he’s at a club where he’s going to be judged differently than he was last season at Brighton.”

Neville’s concerns are shared by former Liverpool defender Jamie Carragher, who said: “I spoke to Ben White before the game and I mentioned about how many opportunities he’ll get to step in with the ball.

“Ben White isn’t going to get as many opportunities to step in with the ball, to actually show the quality that we all associate with him.

“You want to see him do well, it’s a big price tag, but I must say that as soon as Arsenal bought him – and he was linked with Liverpool for 12-18 months – my fear was I wouldn’t want him to come to Liverpool because he’s not tall enough, not good enough in the air.

“If you’re playing Arsenal next week, you’ll be thinking, ‘We’ll stick it on him, we’ll put it up against him, we’ll put our big man on him on set-pieces.’

“When he played in a back three at Brighton, the two next to him were giants.

“So you can step in with the ball, it’s not so much of a problem at set-pieces or long throws.

“But your two centre-backs in a back four have got to be good in the air.

“That’s coming from me, I’m possibly the same size as Ben White.

“I couldn’t dominate anyone in the air – that was Sami Hyypia’s job – and I’d hopefully win 60-70 per cent of headers.

“I said it in commentary, it’s about being clever, using your body as the ball comes in, easing someone out the way, using your experience.

“He is a young player but he’s not going to get any taller so he’s going to have this problem.

“People are going to watch tonight and think: just play long balls on Ben White’s head and you’re going to get joy.

My fear was I wouldn’t want him to come to Liverpool because he’s not tall enough, not good enough in the air

He told Stadium Astro: “What Arsenal need is people who can defend. You look at it now and Vestergaard was available and he’s on his way to Leicester.

“He’s 6ft 4 or 6ft 5 and I’m pretty certain he’d be dealing with those balls coming into the box so recruitment is all-important.

“There were other central defenders available, at £50m he could still probably prove to be a good signing but you’ve got the likes of Andersen signing for Palace.

“So, you take your chances. Of course the manager is part of that and you’re then hoping they are going to put the performances in and you need a central defender for all occasions and tonight that showed a glaring weakness in Ben White’s game.

“But that can be worked on, you can improve that area, you can nudge the striker there’s all sorts of things you can do to improve that but that needs to come from the manager the coaches to improve the players.”

White and his Arsenal team-mates will be back in action on Sunday afternoon, welcoming title hopefuls Chelsea to the Emirates.