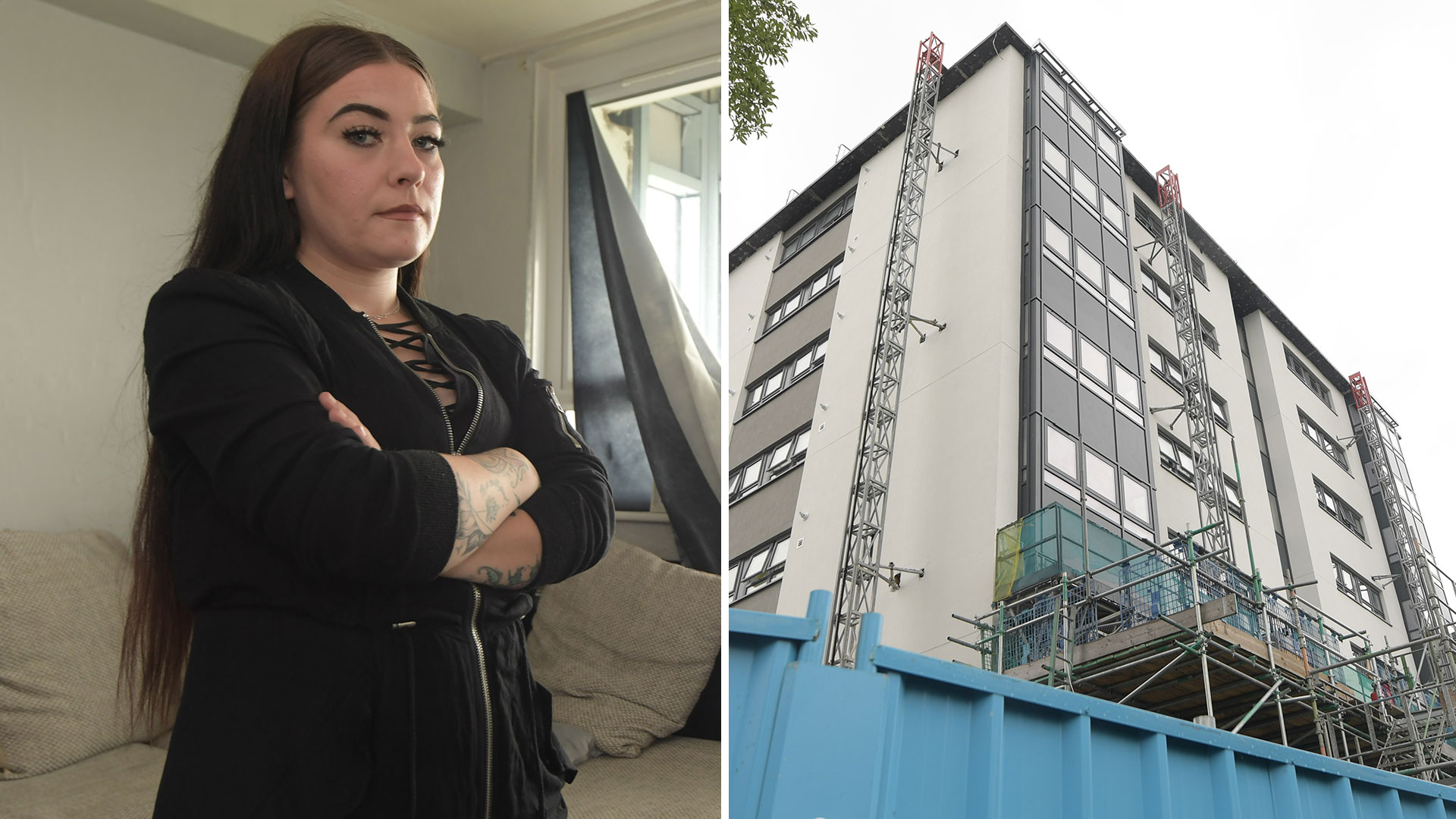 
A FURIOUS mum has claimed her kids have been left struggling to breathe in a high-rise block of flats undergoing constant building work.

Amy Moore is one of the fuming residents who “wants out” of Loweswater House in Kings Norton, Birmingham, due to mould, leaks, dust and “no fresh air” – with one neighbour dubbing the building a “death trap”.

Pointing to a bulging and cracked kitchen ceiling, she said: “This is my ceiling, there’s a piece coming down now.”

The crack came after the builders did work on the property and it began to swell, Birmingham Live reports.

She says it’s hanging on, but there’s water that drips into the light and runs down into a gas cupboard housing electrical plugs.

Amy explained: “It looks like the ceiling is coming down around the light.

“It’s leaking through and every now and again, I’ll see a puddle come through the skirting board. There’s no point spending more money redecorating to have it wasted.”

The black mould in her room and her nine-year-old daughter’s bedroom has been getting worse as the works continue.

Amy said: “I’m asthmatic. I’m not sleeping. I’m getting about two-three hours, just up struggling to breathe or coughing.

“We sit in her living room, where a blanket has been put up to block out the window to give her privacy as builders can see in.”

Mum-of-two Toni O’Connor says she is worried about the health of her youngest who has also “come down with asthma” due to a lack of fresh air in the block.

She said: “Every kid in this block is poorly – how? Every woman I speak to, I ask them how’s their child, and they say they’re on antibiotics. This never used to happen before.

“My kids have never been poorly, it’s only been this year since all the dust, all the mess out there. It’s horrendous.”

Toni says she’s spent a lot of money trying to make her flat presentable but workers have since come in and knock her wall off.

She has also been dealing with leaks and says the builders have left a vent in her cupboard open, with rocks dropping into her washing basket from outside.

The work is expected to continue for another eight weeks, leaving her fuming: “Everyone wants out, everyone wants their homes and privacy back. Everyone was happy and fine before the works.”

Residents say they are forced to live with leaks and mould in their flats.

Some say they have breathing difficulties because they can’t open windows because of work to install balconies.

The outraged tenants said: “You’ve got no circulation, the kids have got no air in the bedrooms”.

One concerned mum who lives on the ground floor described her flat as a “death trap” with nowhere to flee if a fire broke out.

Mum-of-three Kerrie Bigg, 27, cannot get any air into her baby’s room.

The tot has a cold that won’t shake since the building work, she claimed.

She says: “I can open the handles, I push the windows and they doesn’t move because the scaffolding is right up against the window. I can’t get any air, none, in the baby’s room.”

Birmingham city council apologised for the “disruption and inconvenience” and vowed to assess each individual complaint.

A statement from the authority said: “We apologise for the disruption and inconvenience caused by the ongoing remedial works to the external roof and balconies of the tower.

“All balconies including doors and windows have been locked off for safety reasons until all the works to the outside have been completed.

“We appreciate that this is uncomfortable during this hot weather but it is necessary to ensure the safety of the climbers carrying out the works. The lifts have been reinstated and are now operating.

“In terms of the individual complaints by tenants each one of these will be looked into and we will ensure that the contractor’s liaison officer works with the tenant to resolve any issues.

“Any further remedial works which are needed to the properties will be carried out after the main works have been completed.”