My dad is unsung hero – he’s always been there to prop me up, says Deborah James 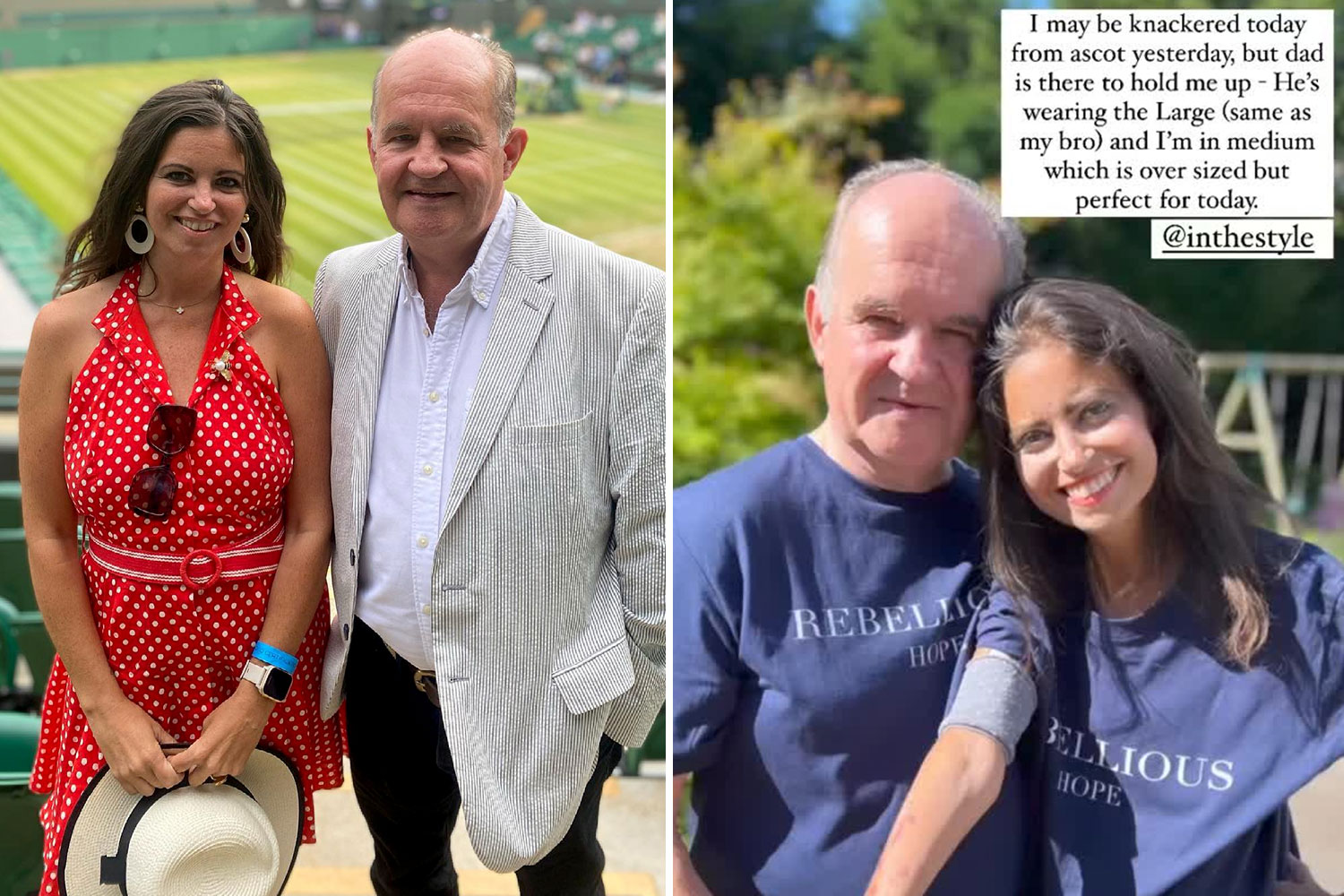 
DAME Deborah James says her dad is her unsung hero who has quietly propped her up throughout her cancer ordeal.

In an exclusive interview, the Sun writer, 40 — who is receiving end-of-life care — salutes her father Alistair.

She issued a poignant message ahead of an emotional Father’s Day.

UK Times writer, 40, declares she is “going to have a whisky or two” with her dad Alistair — who she hails as her “unsung hero”.

She said: “My dad is my unsung hero, more so than ever. He’s quietly there behind the scenes, making sure I am OK.

“He’s always been a very calming, loving presence in my life — he’s very good at handling me and all my craziness. His patience knows no bounds.”

If ever she got in trouble with her Dad, Debs reveals she knew “sh*t was bad”.

She says: “It didn’t matter how naughty I’d been, he knew how to handle me.

“When I ruined the bathroom when I dyed my hair, he took it all in his stride.

“He would walk to me with a can of petrol when I ran out and needed to be rescued.

“My whole life, he has just been standing behind me, quietly holding me up.”

Debs says she has never been more grateful.

When she was in hospital for months at the beginning of the year only her mum, Heather, was allowed to visit.

But it was dad Alistair who drove her in every day to make sure his daughter wasn’t alone.

Debs reflects: “It must’ve been horrible for him not being able to come and see me. I am his daughter too.

“It breaks my heart knowing they are having to watch this, I can’t imagine what it must feel like.”

She added: “I’ve not always been a big one for telling Dad how much I love him, so take it from me, just say it. You never know when it might be your last chance.”

I’ve not always been a big one for telling dad how much I love him, so take it from me, just say it

Like her husband Seb and brother Ben, it’s Debs’ dad who lifts her and helps her get out to enjoy the days she has left.

One of her greatest sources of comfort is cooking – and as with everything she does Alistair is there to support her.

“I find cooking really therapeutic at the moment, not that I ever actually eat the food,” Debs jokes.

“I am painfully slow at everything, but Dad just patiently helps. The other night cooking fajitas took about an hour and a half, when it should’ve taken 30 minutes.

“Rather than just try and do it for me, he passed me the different ingredients and let me do my thing.

“It sounds like a small thing, but it means the world – and I love doing it with him.”

Debs points out: “He’s off on holiday to the US tomorrow. I have told him they have to go, they’ve planned the trip for ages. I also told him he must not come back, under any circumstances.”

But she tells me: “He says he’ll come home.”

She adds: “It’ll be horrible saying goodbye to him. I can’t really think about it right now.”

And with the horrible inevitable looming, she reveals her greatest comfort is watching the “incredible” father her husband Seb is to their kids, Hugo, 14 and Eloise, 12.

She also admitted: “It’s too hard to think about, the idea I won’t see my son as a father.”

Reflecting on the men in her life, she says: “I can’t stop crying. I’m incredibly lucky, it’s hard to put it all into words.

“For me, this year it’s about my dad and Seb, but it’s also about the men in my life who will hopefully one day be fathers too, my son and brother.

“I can’t really comprehend the fact I won’t be here to see that. It breaks me.

“The biggest thing for me right now, not knowing how long I have left, is that the kids will be Ok.

“Seb is a great father, he’s incredible with them both.

“I have absolutely no concerns about what will happen to the kids.

“He dotes on them and I know they will want for nothing.

“He loves them so much, and I know that when I’m no longer here, he will love them for me too.”

The fact she has lived to see Father’s Day is a surprise to Debs, who left hospital over a month ago to receive end-of-life care at her parents’ home in Woking, Surrey.

Given just days — weeks at most — to live, Debs was determined to make it count.

The cancer campaigner went into overdrive, raising £6.7million for her BowelBabe Fund.

She released a new book, launched a fashion line and raised another £1million for her fund selling T-shirts emblazoned with her motto Rebellious Hope.

And after UK Times mounted a campaign to honour our columnist, Debs was made a Dame in a day — and had Prince William over for tea to celebrate.

What’s more, she defied the odds to make it to Royal Ascot this week, and tells me there’s more on her list, if she’s up to it.

It’s kept her going, but Debs admits outliving yet another prognosis is proving hard — the not knowing is “impossible”, she says.

She explains: “I woke up in the night having a panic attack. I’m exhausted.

“I thought I had just days to live when I left The Royal Marsden.

“I had a time frame, but now we don’t know how long I’ve got. It’s a very hard place to be.

“I keep asking my nurses, ‘how will I know when the end is coming’, but no one has an answer.

“It’s different for everyone. But right now, my body is still working, I’m eating and still enjoying a cocktail or two. The hardest thing is how uncomfortable I am.

“My brother’s fiancee Ashley described it perfectly. It’s like sitting in the most uncomfortable plane seat on the longest flight and you can’t get out. I am completely reliant on my family to move, it’s hard for them too.”

‘It breaks my heart that I won’t see their kids’

Ben recently popped the question to Ashley after 11 years together.

The proposal came not long after Prince William visited the family to honour Debs — and apparently gave Ben a nudge.

At the time, Debs revealed: “He finally put a ring on it. If you follow me, you will know brother banter features highly, and even Prince William got in on the action recently.

“The question to my brother has always been, ‘why haven’t you proposed?’”

Debs says it has been tough having to accept she won’t see their wedding, but when the subject of their kids comes up, she bursts into tears again.

She says: “My brother will be the most amazing dad. I am so pleased he is engaged, I love Ashley and they are so happy together.

“I have watched him with my kids over the years, and especially recently. He’s that incredible fun uncle, he and Ashley spoil them rotten.

Seb loves them so much, I know that when I’m no longer here, he will love them for me too

“And he’s wonderful with his godchildren too.

“It breaks my heart that I won’t see their kids, or see the dad he will be.

“But I know, without a doubt, he will be incredible.”

It was fitting that as Father’s Day loomed it was the men in her life — her husband in particular — who inspired Debs’ latest limited edition Rebellious Hope T-shirt.

The new navy blue and white option launched on Thursday evening and in a matter of hours helped Debs and the In The Style brand reach a momentous milestone.

She says excitedly: “All the sales of my Rebellious Hope T-shirts have helped raise £1million for my fund. It is mind blowing, I am so grateful to each and every person who has bought one and helped us raise such an incredible sum.”

Debs ends our chat by urging everyone to give it up for the dads.
She says: “I don’t think dads ever really get as much credit as us mums, do they?

“I’ve not always been a big one for telling my dad how much I love him, so take it from me, just say it.

“You never know when it might be your last chance.”

DAME Debs used her final TV appearance to urge everyone to talk freely about their bowel habits.

On E4’s Embarrassing Bodies on Thursday, she said: “I had this image of bowel cancer as an old man’s disease, which I now know is not the case. It’s one of the largest rising cancers in people under 50.

“I started going to the poo, we need to say that, eight times a day. I used to be a once a day kind of girl.”

Debs said feeling tired, losing weight and blood in her poo led her to think something wasn’t right.

She told the show’s Dr Tosin Ajayi-Sotubo: “Can you take this message out to the streets for me.

“Let’s not be embarrassed. We all poo, like our favourite celebrities poo, let’s smash those taboos because that is going to save lives.”

Debs has said she has no plans to do any more TV.