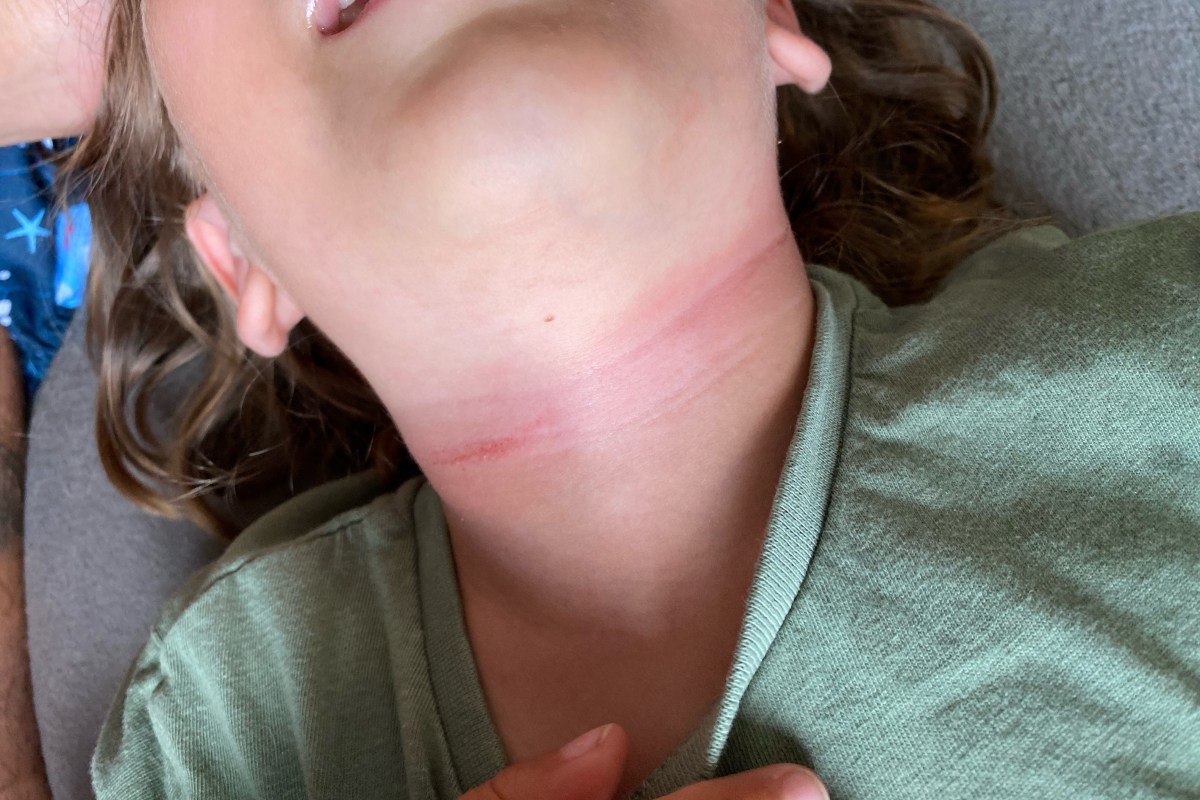 
A MOTHER has told of her horror after her three-year-old son was almost strangled by an Amazon string curtain.

Katie Hughes, 25, was left ‘distraught’ at hearing Junior’s ‘struggled cry’ when the £10.99 ‘spaghetti string’ blinds got caught around his neck at their family home in Trimley St. Martin, Suffolk, last week.

Katie told the Sun: “His response was to keep on running to get it untangled, but that made it worse.”

The mother-of-two has now issued a stark warning to parents about the window dressing, which the family used as a fly screen over their garden doors.

Shocking pictures show the little boy with a bright-red gash across his neck, which his mum says has turned into a nasty scar.

Junior was playing indoors with his dad Jordan, 26, before running outside to enjoy the warm weather last week.

But, without Jordan and Katie knowing, the string in the newly-bought curtains had got tangled at the bottom.

As the youngster ran through them, they quickly became caught around his neck.

Eventually, the force of Junior’s desperate struggling sent him flying backwards as his frantic dad rushed to cut him free.

His terrified mum told how Junior’s younger sister Isla, two, might not have been able to fight against the string as well as her big brother.

Katie added: “Luckily he’s older. If Isla got tangled I don’t know what would have happened, she’s much smaller.

“The sound that came out of his throat when that string was wrapped around him was horrible. It was like a struggled cry.

“I was distraught, it makes me feel sick. I’ve never heard anything like it.

“I question would I have heard it if I hadn’t been in the kitchen, or if Jordan wasn’t nearby.”

This is not the first time curtains have proved dangerous for children.

In 2019, a mother shared terrifying photos of her young son’s neck after the cord of a window blind nearly strangled him to death.

Arika Hernandez, 27, from Utah in the US, told how three-year-old Kai was playing on the top bunk of his bed when he wrapped the cord around his neck as a game.

The lucky toddler later told his mum he had been “trying to make a necklace”.

Meanwhile in Manchester, a two-year-old girl died after being strangled by a blind cord in her bedroom.

An inquest into Macy Fletcher’s death heard she was found upright but unresponsive next to a window.

The little girl was discovered by her mother who went to check on the tot.

The blind cord was wrapped around her neck.

Window dressings have proved dangerous for curious young children, with loose cords a choking hazard if wrapped around their necks.

In 2019 in Manchester, a two-year-old girl died after being strangled by a blind cord in her bedroom.

The following year, one-year-old Rifky Grossberger was strangled to death by a bedroom blind cord.

She stood up in her cot and became entangled in the looped cable.

But there are ways to prevent tragedy.

Parents are advised to check for loose or looped cords that could get tangled around a child’s neck and ensure they are out of arms’ reach.

Child-safe curtains and blinds – which include measures such as tie backs or covers for cords – can also be purchased online, and are ideal for those with concerns.