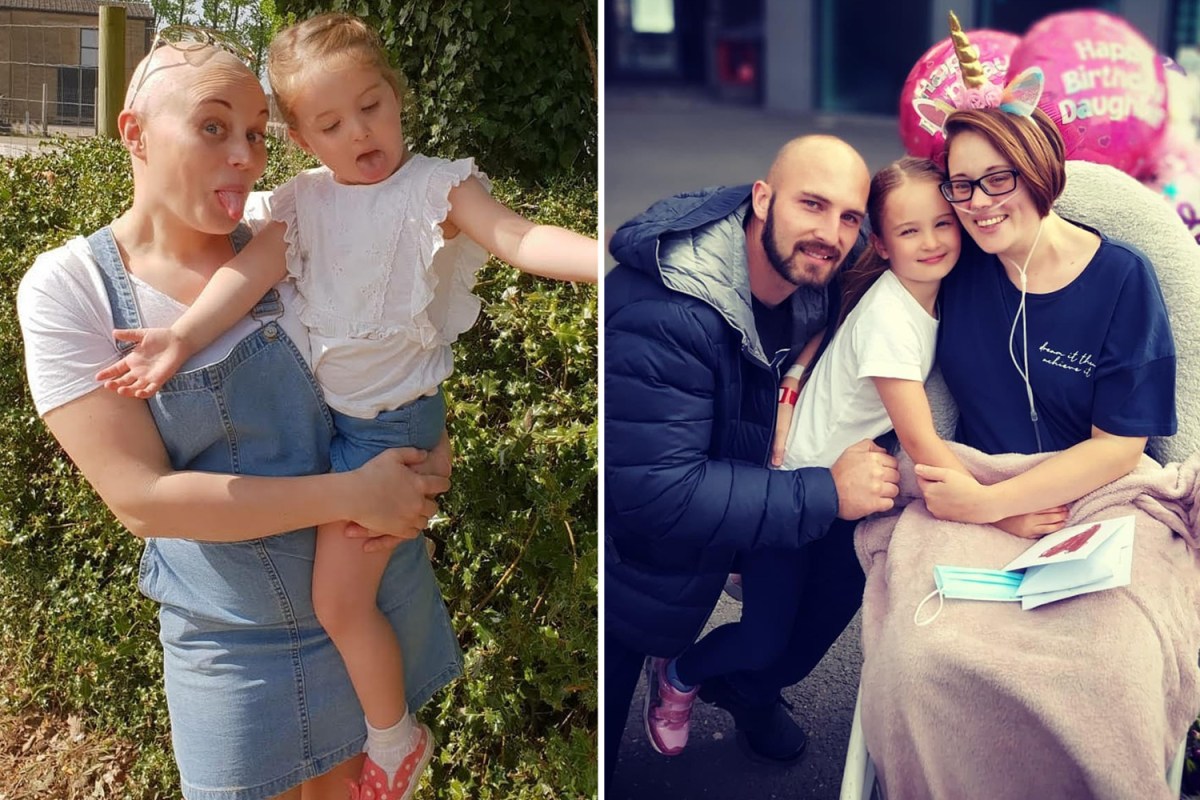 
AN INTENSIVE care nurse with terminal lung cancer claims she was misdiagnosed with long Covid – despite her never testing positive for the virus.

Mum-of-one Brogan Williams, 33, was in remission from breast cancer when she began feeling shortness of breath and pain in her back in October 2020.

She claims that the lack of face-to-face appointments and a scan that focussed on her spine meant doctors didn’t see cancer cells growing on both of her lungs.

It wasn’t until Brogan went to A&E at New Cross Hospital in Wolverhampton on July 27 that she was told her cancer had returned.

The 33-year-old said doctors told her she would need palliative care, despite her being in the hospital on her own at the time.

Brogan said: “I’ve been in remission since October last year but have been going back to GPs and oncologists with pains in my chest, but they told me that I was too young for the cancer to have come back.

“With Covid, you don’t get seen and it’s all telephone consultations.

“I was taken in in February for back pain and had an MRI of my spine, which came back clear.

“But actually, if they’d done a scan of my chest, they would have seen that there was cancer in my lungs at that point.

“Now it’s in both lungs and is very advanced. It’s in my neck and I have two spots on my liver which they can’t rule out as cancer too.”

Brogan was first diagnosed with cancer in January 2019.

She and her husband Gareth, 32, had been trying for a baby for 12 months when he noticed one of her nipples was inverted.

Brogan thought this was a sign of pregnancy but when her period came, she went to get it checked out by a doctor.

She was then diagnosed with stage three breast cancer.

Brogan said: “You don’t expect it. I’d just turned 30 so was planning for the next 30 years.

“I couldn’t get rid of a cold but thought it was something I’d picked up from work.

“Over Christmas 2018 my husband said: ‘What’s happened to your nipple?’ and I thought I must be pregnant.

“But unfortunately, it wasn’t the case and it was the ‘big C’ instead.”

Brogan was diagnosed with Covid lung, a symptom associated with long Covid, when she went to A&E with chest pains on July 18.

She claims doctors told her to go home and rest.

Brogan said: “I was at home with my daughter and could barely walk up the stairs.

“By the next week, I was walking up the stairs and it was like someone had punched me in the back and knocked me off my feet.

“My daughter almost rang 999 because it was only me and her at home.

“I said to myself: ‘Come on Brogan, pull yourself together, it’s just Covid lung’.”

Brogan had been to see her oncologist at the end of June who discovered a lump in her neck and sent her for an urgent scan and biopsy.

A CT scan done on July 18 showed cancer and fluid on her lungs, but she said not no one told her until she presented again in A&E on July 27.

Brogan, who lives in Pendeford, Wolverhampton, said: “I’ve completely been missed at every opportunity. There’s a whole persona in the medical community that you’re too young to have secondary cancer.

“Now they’ve left me for as long as they have done, I’ve got the lungs that I have. They told me that it was palliative and there was nothing they could do when I was on my own in A&E.

“I’m a bit of a stubborn bugger though so I won’t let them tell me anything.”

Brogan’s pain was initially put down to the radiotherapy she had undergone to battle breast cancer.

Brogan said: “I felt like they were telling me to stop being silly and to just get on with it.

“They never give you a scan to give you the all-clear because it’s too much radiation so they never actually confirm that you’re cancer-free.

“I’m now waiting for test results to find out exactly what type of cancer it is.

“I’m a ticking time-bomb. They’ve filled the outside of my lungs with talcum powder to try and stop them from filling up.

“The cancer will keep pushing the fluid out and stopping me from breathing until it will eventually completely stop my lungs.

“It’s a case now of waiting to see what I can have a treatment which will be the only chance I’ve got.

“Without treatment, it literally will just kill me.”

Brogan’s mum Lorraine, 56, is her full-time carer as Gareth works away most days as an HGV driver.

Brogan said: “I am so lucky, I feel like I’ve won the lottery with the family I’ve got.

“My daughter is struggling and has been sleeping in the bedroom with us.

“We’re just trying to keep it as normal as possible and trying to divert our mind from what the prognosis is and think of what it could be.

“When I’m happy, I’m healing because we regenerate good cells so I’m trying not to be in that fight mode.”

Brogan wants to raise awareness for the type of cancer she has which is classed as metastatic breast cancer even though it is in her lungs.

The mum has now begun writing letters to her five-year-old daughter, Freya, to read at pivotal moments in her life.

Brogan said: “I’m writing letters for her which people may see as a sign of giving up but it’s me taking control.

“I always want her to know exactly what I’d say to her in certain situations like her first period or the first time she meets a boy and gets those butterflies.

“It sends your head a bit mental though because you start to accept it.”

A GoFundMe page has been set up to help raise money for Brogan and Gareth to take Freya on a once-in-a-lifetime trip to Disneyland in Florida, USA.

Brogan said: “She really is a true princess and I just want her to see the magic.”

Gwen Nuttall, chief operating officer at The Royal Wolverhampton NHS Trust said: “A patient would only be admitted from A&E should there be a clinical reason at that point for them needing to be so. In many cases, further investigations are carried out as an outpatient.

“We are sorry that Brogan feels she didn’t receive the care she would have expected, we would welcome the opportunity to discuss this with her in more detail. Our patient experience team will be making contact with her.”