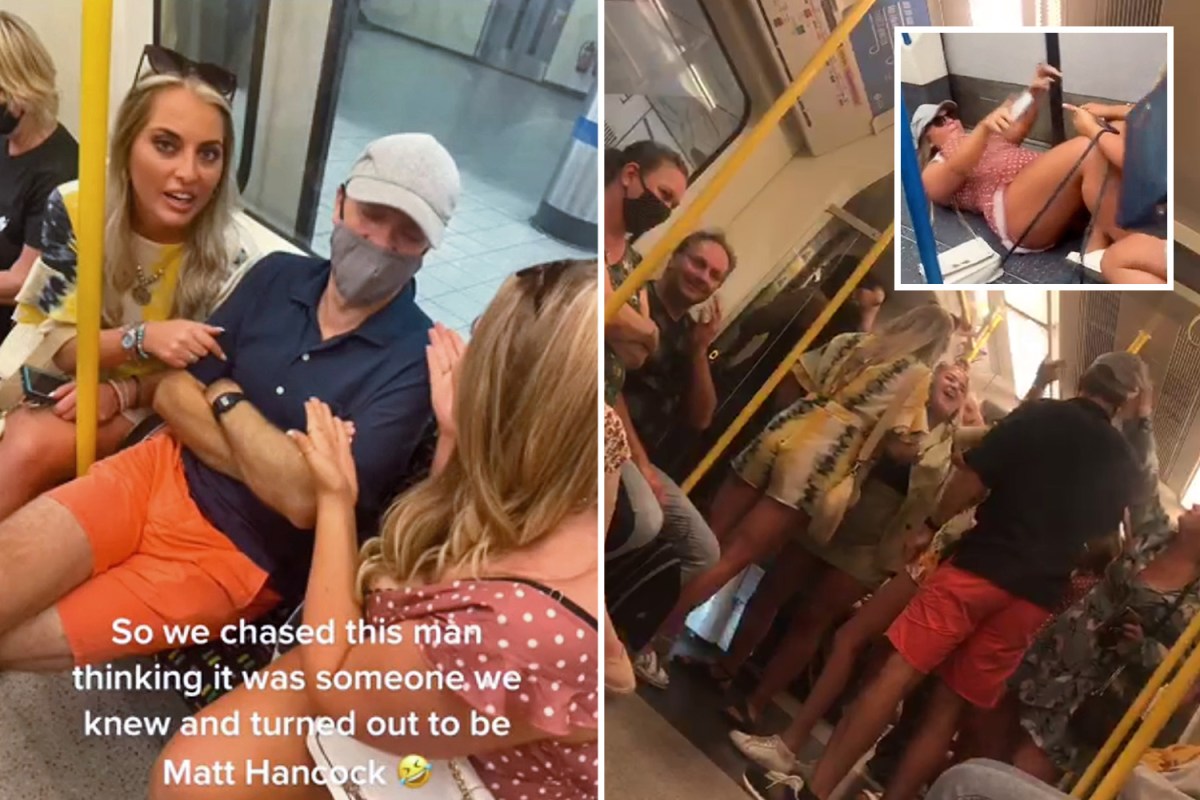 
THIS is the moment flirty Matt Hancock has his basketball cap nicked by a group of laughing women on the tube.

The shamed MP was filmed chatting to the rowdy group of ladies who were on a night out around 9pm on Saturday.

The former Health Secretary stands up to cheers and applause after three of the ladies, who are not wearing masks, surround his seat and can be heard asking, “Are you really Matt Hancock?”

They then gesture for him to take his mask off saying: “You’ve been double jabbed so we’re good.”

A woman wearing a blue dress then whips his hat off his head and dances around the carriage wearing it.

Hancock, in red shorts and a navy polo shirt, gets up and makes his way to the standing area of the carriage where he appears on the camera with his hat returned to him.

The group of women, who were travelling on the District Line, continue to huddle around Hancock and as they approach their stop one says: “We’re loving Matt.

But as they pull into their station the hat is again stolen from his head and the same woman runs off the tube with it in her hand.

An onlooker said: “He was clearly loving the attention, but I think stealing the hat was a bit too much.

“When the group spotted who he was they sat next to him.

“One girl even sat on her mate’s knee so Hancock had three women around him, they were getting pretty close.

“That is when he got up and went to stand near the doors.

“But there were more women there and they all followed him anyway and gathered around him.

“They grabbed the hat and he tried to get it back but they were all laughing and cheering.

“It was very funny.

“The woman put the hat on as the tube pulled out of the platform.

“It was all good-natured fun but I think if that had been me and not a group of drunk women, then it would be a different story.

“He [Matt] looked uncomfortable after it happened because, I guess, it left him exposed for the rest of the journey.

“People could see who he was more clearly.

“He shouted after them to give it back and he tried to keep it on his head when the woman grabbed it, but she was too fast for him.”

Before the women left the tube Matt can be heard saying: “You go and enjoy yourselves.”

The former Health Secretary was forced to quit the Cabinet in June after footage emerged of him in a passionate clinch with married Gina Colandangelo, 44, in his office.

Hancock, 42, packed up and left his family home in the wake of the exposé amid public outrage over the breach of social distancing rules.

He reportedly split from long-time wife Martha Hancock to begin a new relationship with married Gina, his former aide.

Last week the Tory backbencher was pictured enjoying a seaside holiday in Cornwall, where he was seen in the same resort as Mrs Hancock and their three children.

The holiday comes just two months after he was pictured packing boxes, suitcases, and bags into his car outside his marital home.