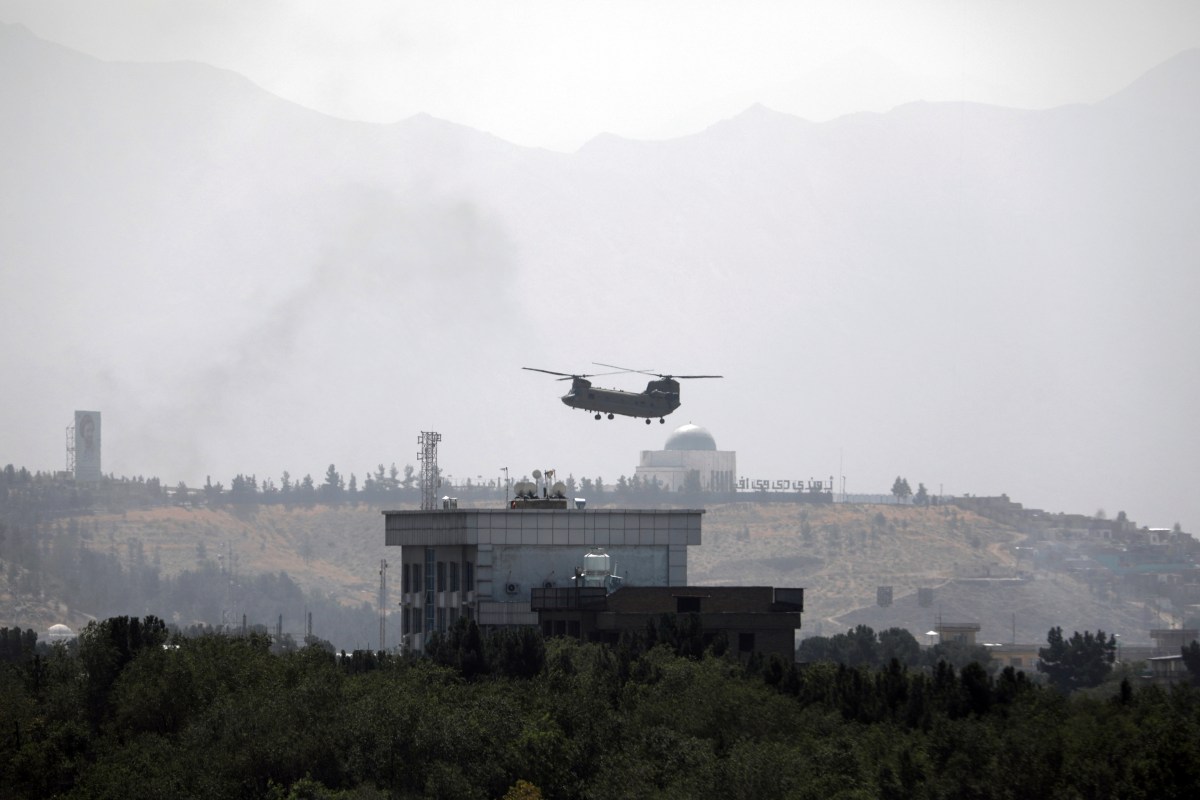 In scenes echoing the sudden fall of Saigon at the end of the Vietnam war, a US Air Force chopper was seen taking off from the US Embassy this morning.

That marked the end of the Vietnam conflict.

It comes as the US steps up its evacuation of Kabul with Taliban fighters surging in “from all sides”.

There were no reports of fighting.

Taliban spokesman Zabihullah Mujahid said the group was in talks with the government for a peaceful surrender of Kabul.

The entry into the capital caps a lightning advance by the Islamist militants, who were ousted 20 years ago by the United States after the September 11 attacks.

US THOUGHT KABUL COULD HOLD OUT

The collapse of the Afghan government’s defense has stunned diplomats.

A tweet from the Afghan Presidential palace account said firing had been heard at a number of points around Kabul but that security forces, in coordination with international partners, had control of the city.

There was no immediate word on the situation from President Ashraf Ghani.

A palace official said he was in emergency talks with US peace envoy Zalmay Khalilzad and top NATO officials.

Many of Kabul’s streets were choked by cars and people either trying to rush home or reach the airport, residents said.

One resident told Reuters by phone: “Some people have left their keys in the car and have started walking to the airport.

“People are all going home in fear of fighting.”

US officials said diplomats were being ferried by helicopter to the airport from its embassy in the fortified Wazir Akbar Khan district.

More American troops were being sent to help in the evacuations after the Taliban’s lightning advances brought the Islamist group to Kabul in a matter of days.

Meanwhile, a Nato official said several EU staff had moved to a safer, undisclosed location in the capital.

Earlier today, the insurgents captured the eastern city of Jalalabad without a fight, giving them control of one of the main highways into landlocked Afghanistan.

They also took over the nearby Torkham border post with Pakistan, leaving Kabul airport the only way out of Afghanistan that is still in government hands.

The capture of Jalalabad followed the Taliban’s seizure of the northern city of Mazar-i-Sharif late on Saturday, also with little fighting.

A Jalalabad-based Afghan official told Reuters:”There are no clashes taking place right now in Jalalabad because the governor has surrendered to the Taliban.

“Allowing passage to the Taliban was the only way to save civilian lives.”

A video clip distributed by the Taliban showed people cheering and shouting Allahu Akbar — God is greatest — as a convoy of pickup trucks entered the city with fighters brandishing machine guns and the white Taliban flag.

After US-led forces withdrew the bulk of the their remaining troops in the last month, the Taliban campaign accelerated as the Afghan military’s defences appeared to collapse President Joe Biden yesterday authorized the deployment of 5,000 U.S. troops to help evacuate citizens and ensure an “orderly and safe” drawdown of military personnel.

A US defense official said that included 1,000 newly approved troops from the 82nd Airborne Division.

Taliban fighters entered Mazar-i-Sharif virtually unopposed as security forces escaped up the highway to Uzbekistan, about 50 miles to the north, provincial officials said.

Unverified video on social media showed Afghan army vehicles and men in uniforms crowding the iron bridge between the Afghan town of Hairatan and Uzbekistan.