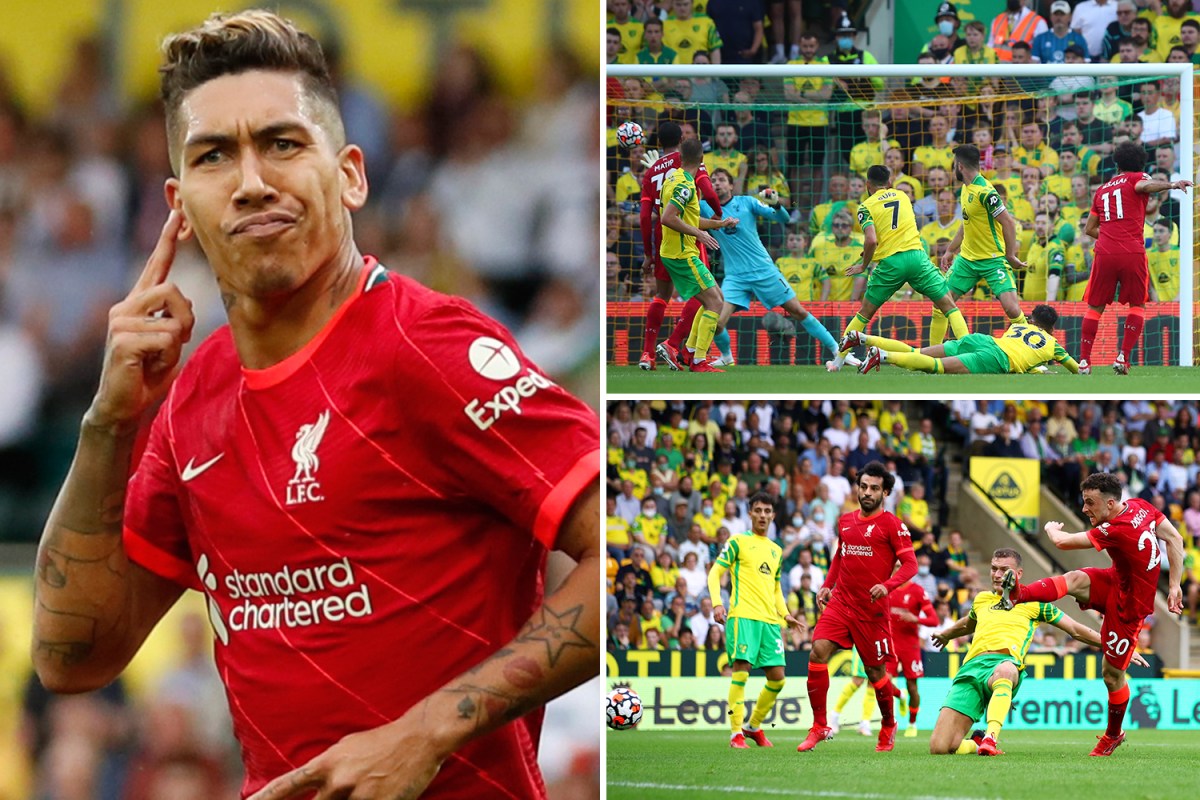 
JURGEN KLOPP oversaw a 4-1 victory over Norwich on the opening day of the season two years ago – and we all know how that campaign ended for Liverpool.

So maybe Klopp will see this comfortable win against Daniel Farke’s yo-yo Norwich as some sort of lucky omen.

Ultimately, Liverpool’s aims for this term are a bit different from those heady days when they were the freshly-crowned kings of Europe.

But there was enough composure and swagger in Liverpool’s performance- albeit against a team which faces enough struggle this season – to suggest Klopp’s side will at least be continuing where they left off last season over the next few weeks.

Liverpool snatched five successive wins to somehow finish third and at Carrow Road, Virgil van Dijk – playing his first game for 10 months after a serious knee injury in the Merseyside debut – looked as though he had never been away.

And Trent Alexander-Arnold, whose Euro 2020 was ruined by a thigh injury against Austria, was back to his irresistible best, causing mayhem down the right.

Ibrahima Konate, a £36million arrival from Leipzig, has been Liverpool’s only summer purchase so far.

If Van Dijk and Joel Matip are as dominant as they were here, Konate will have to be patient to get his chance.

While Klopp is not admitting it publicly, managing just one signing this summer is clearly frustrating for a club of this size, particularly as they also lost to Gini Wijnaldum on a free transfer to PSG.

Many football fans outside Merseyside do not realise the massive hole that Wijnaldum leaves and maybe over the next couple of weeks, this issue will still be addressed.

So, as Klopped became annoyed with the big spending of both Manchester clubs, it was important that his four strikers all started well.

Obviously, the tests will be getting a hell of a lot tougher.

For Norwich this defeat was not a major shock. Apart from the quality of the opposition, their summer has hardly been ideal.

Other than losing Emi Buendia to Aston Villa for £33m, they have suffered some major Covid issues in the camp.

They had been forced to cancel two friendlies, at times over 10 players were self-isolating and not all of those featuring yesterday were 100 per cent fit as they had only just returned to training.

Ultimately, though, while Liverpool’s first two goals had a certain of amount of fortune involved, there could be no complaints from the home side who rarely threatened.

They have spent over £50m on new arrivals and three of the signings, on-loan Billy Gilmour, Milot Rashica and Pierre Lees-Melou started against the Reds.

They had some promising moments – and Norwich will clearly be less gung-ho than two years ago when they finished bottom – but Klopp had no major reason for major emotion at the ground where he smashed his glasses while celebrating a 5-4 win in january 2016.

Playing in the centre of the middle three, Jota had Liverpool’s first chance but his glancing header was tipped over by Tim Krul. Salah shot straight at Krul while he steered a difficult-looking volley flashing wide after a clever cross from Sadio Mane.

In Norwich’s first attack back in the Premier League, just before the midway point of the first half, Teemu Pukki raced clear before hammering a shot straight at Alisson.

Pukki then flung himself to the ground in the hope of winning a foul at the expense of Van Dijk and after Andre Marriner waved play on, Liverpool eventually scored.

Alexander-Arnold was given too much space out wide and while Salah was unable to control the ball, his touch put the ball beyond Ben Gibson and Jota stabbed the ball past Krul.

Matip should have made it 2-0 after some terrible home defending but his shot was deflected by Lee-Melou for a corner.

Mane had a goal-bound shot blocked by Max Aarons as Dimitris Giannoulis was once again caught out at left back with Alexander-Arnold delivering another dangerous cross.

Liverpool became a bit disjointed in the second half, Klopp replaced Jota with Firmino and four minutes later, the Brazilian struck.

Firminio started the move down the left and then was presented with a simple chance after Mane’s shot was deflected into the path of Salah, who picked out his team-mate.

Salah grabbed the third by smashing the ball into the top corner when Ben Gibson could only head Tsimikas’ corner to the edge of the 18-yard box.

And it was another example of sloppy defending which Farke’s team will have to cut out if the club is to avoid a fourth relegation from the Premier League within a decade.

As for Liverpool, there will be once again challenging at the other end of the table, of course.

But whether it is for first spot – or merely the top four – remains to be seen.