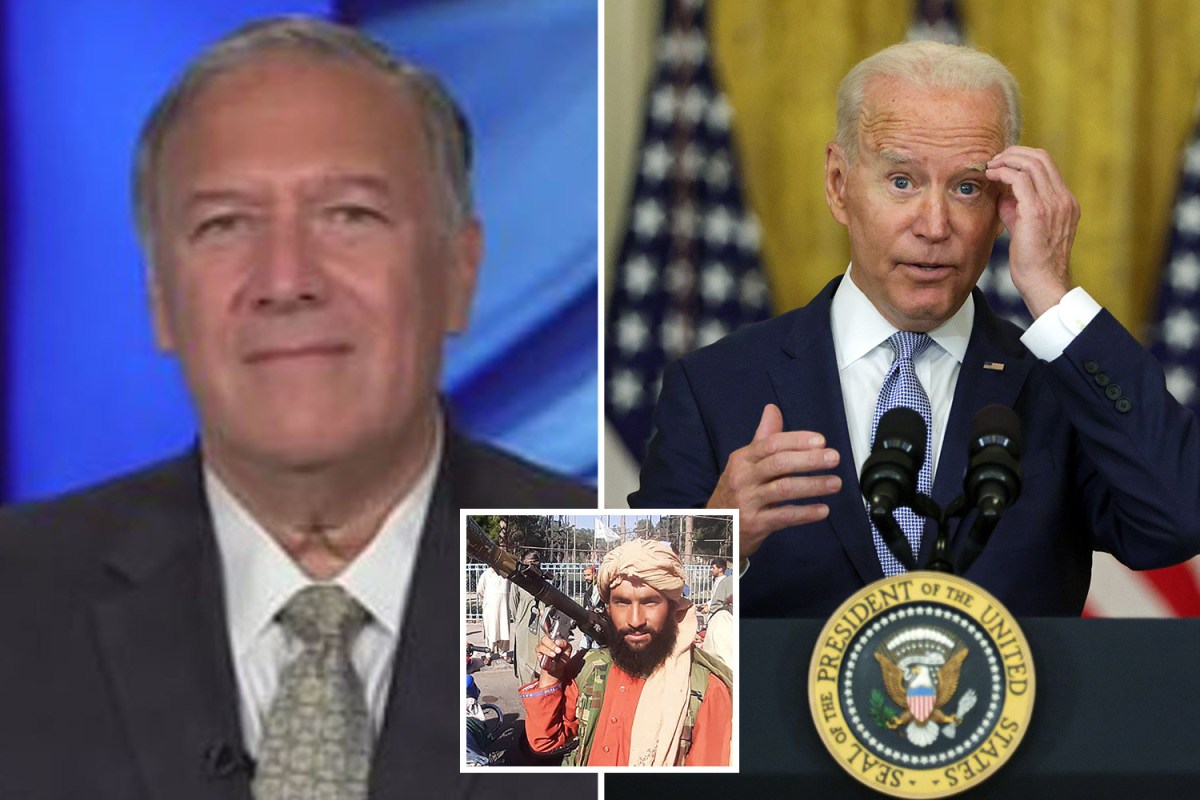 His comments came as the militants seized Kandahar and Herat – the second and third largest cities in the country.

Pompeo slammed Biden’s decision to withdraw troops from Afghanistan by August 31 – ahead of the 20th anniversary of 9/11.

He told Fox News: “It looks at best naïve and at worst ignorant. Weakness begets war, and you can see what weak leadership ultimately leads to.”

“Strategy depends on planning and execution. Looks like there’s a bit of panic. I hope that they have the right number of folks and get them there quickly.

“I hope we can protect Americans in the way the Trump administration had everything intention of doing.”

He warned that the Taliban siege could “provide a hotbed” for Al-Qaeda and ISIS terrorists.

Pompeo claimed that Trump established a “deterrence model,” adding that not a single American had been killed by the insurgents since Washington and the Taliban negotiated in early 2020.

He said: “We wanted to make sure that we always had the conditions-based analysis that would protect America, at least reduce the risk that there could be an attack from that place.”

Biden has ordered the temporary deployment of 3,000 US troops amid fears that Kabul could fall within weeks.

Military personnel have been sent to Kabul airport to help evacuate staff from the US embassy.

Taliban militants have now taken 12 of the country’s 34 provincial capitals as part of a week-long siege.

The city is considered to be the heartland of the Taliban and is a major trading hub.

But forces were still in control of the airport – the U.S. military’s second-biggest base in Afghanistan.

The assault came after the militants seized the city of Ghazni, where they broke into a jail and freed 400 inmates.

Thousands of people displaced by the fighting have fled to Kabul and are reportedly living in open fields and parks.

Militants seized Lashkar Gah where British troops are being held, and it’s reported that women are being rounded up and raped before being held prisoner.

And, the Taliban have captured the capital of Zabul province, according to the AP.

It’s estimated that insurgents have control of two-thirds of the country, escalating fears that Kabul could fall within weeks.

It’s feared that if the Afghan government is overthrown, Taliban officials will impose a repressive regime.

Reports have emerged that fighters are “going to door to door” to round up young girls to be “sex slaves” for the terror group.

And, gloating gunmen paraded through the streets in US Humvees and chanted Allahu Akbar as they captured cities last week.

Afghanistan is careening toward a massive, predictable and preventable disaster.”

Militants flew the Taliban’s white flag as they captured Zaranj – a major trading hub near the border with Iran.

Insurgents stormed the streets armed with guns thought to be stolen from the US Army while footage showed shots being fired into the air in celebration.

Afghanistan is America’s longest war and Biden announced in April that he wanted troops out of the country by the 20th anniversary of 9/11.

He said: “Afghanistan is careening toward a massive, predictable, and preventable disaster.

“The Biden administration has reduced US officials to pleading with Islamic extremists to spare our embassy as they prepare to overrun Kabul.”

McConnell fears the exit strategy is sending Washington “hurtling toward an even worse sequel to the humiliating fall of Saigon in 1975”.

And top Republican Rep. Mike Rogers said: “For months I have pressed President Biden for a plan to avoid the very situation that is happening in Afghanistan.

“Now American lives are at risk because President Biden still doesn’t have a plan.”

Top US officials have maintained that the US government is not “abandoning” Afghanistan.

The US has already withdrawn most of its troops from Afghanistan with only 650 remaining.

Officials stressed that the deployment of troops doesn’t mean the US is re-entering into combat against the Taliban as they stated the mission is temporary.

It’s reported that the US is determined to push for peace between the Taliban and the Afghan government.