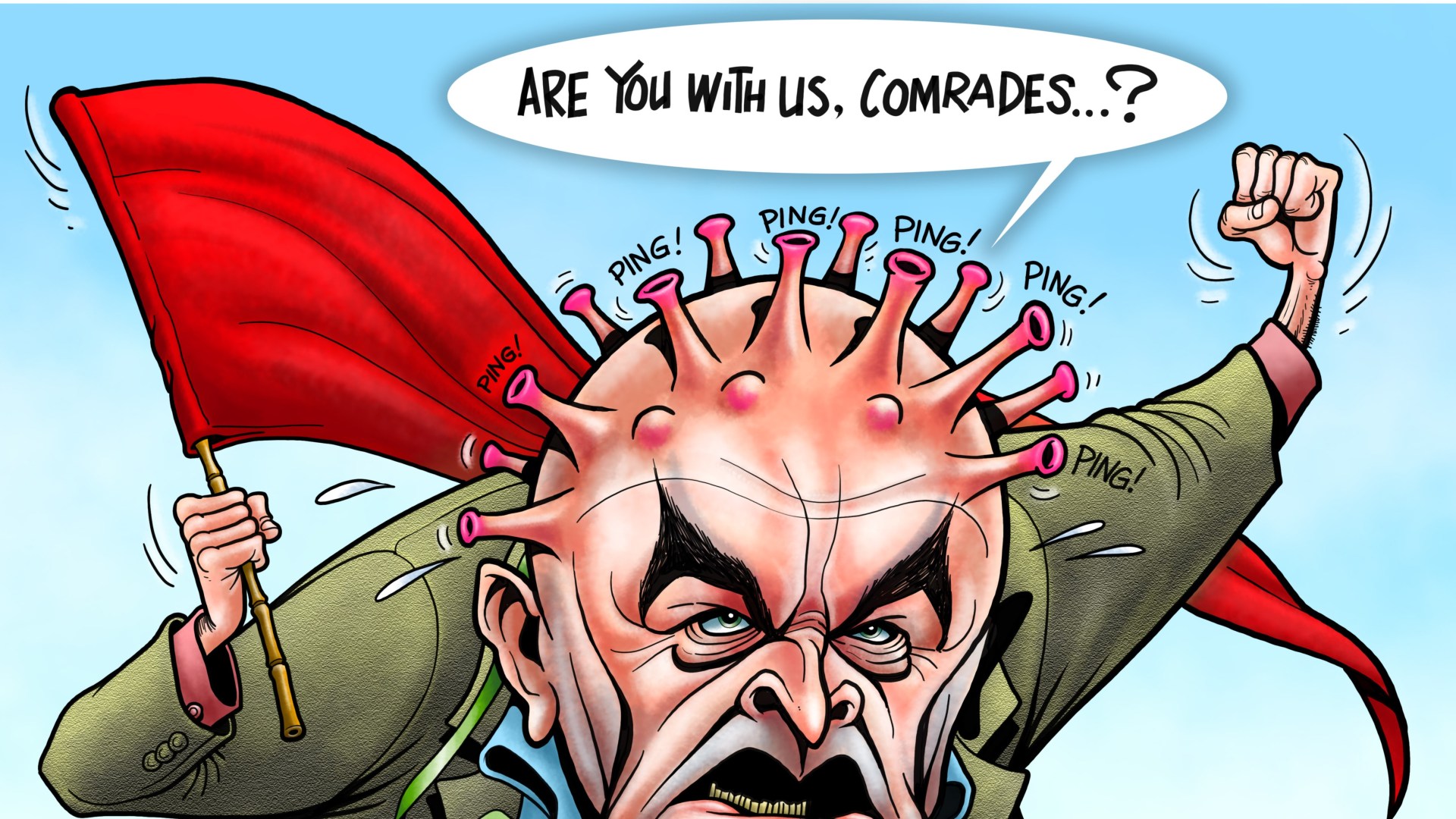 
“WE must steel ourselves for a long war,” warns Boris Johnson.

But he could easily have been eyeing the threat by unions sympathetic to the Russian cause to pulverise Britain’s economy.

For tomorrow’s nationwide shutdown by Marxist union barons is nothing less than a declaration of war against Johnson’s democratically elected government.

Marxist class struggle is defined as a revolutionary clash between “workers and the ruling class” in which violence is acceptable.

Lynch’s hero is infamous miners’ leader Arthur Scargill who tried — and failed — to bring down the Thatcher government in 1984.

And in a stark, Red Flag challenge, he warns flip- flopping Labour leader Keir Starmer to back the strike — or “get out of the way”.

“The message is clear: We are in a class struggle now,” the electrician told a weekend rally.

“Stand up and fight with us or get out of the way. We will keep this strike going until we get a settlement . . .  Get up and fight or live on your knees. The struggle is on. Bring it on.”

Shifty Starmer has publicly urged the unions to call off the strike, while secretly offering his full support.

He told Labour’s controlling National Executive it was “wrong for the Government to restrict the right to strike”.

Now Lynch is plotting with other public sector unions covering aviation, hospitals and schools to shut down the entire country in the first General Strike since 1926.

That would paralyse production, destroy the summer holidays of millions of innocent families and turbocharge inflation burning through household budgets.

It threatens the hopes and dreams of schoolchildren in the final weeks of their A levels — just as they emerge from the nightmare of Covid lockdowns.

Summer highlights such as the Glastonbury Festival, Manchester’s athletics championships and London appearances by Elton John and the Rolling Stones will also be hit.

Yet this carnage is considered a small price to save a dinosaur rail workforce and its anarchic “Spanish practices” which became extinct elsewhere in the last century.

For this is nothing to do with “the workers”. It’s about protecting public sector workers, the last bastion of union power.

Lynch’s declaration of war is no spur-of-the moment protest. Militant public sector unions have been biding their time, and building a huge war chest, from the day Boris Johnson became PM.

“They have been gunning for this,” says Transport supremo Grant Shapps.

“This strike is completely unnecessary. The world is changing. We need to protect the travelling public.”

The strikers have been granted a near-perfect formula for maximum disruption.

Boris is on the back foot with his own party. Inflation is out of control. Voters are tightening their belts for the first time in many lives.

Boris Johnson became a hero in Ukraine for delivering the weapons to beat off Putin’s war machine.

Labour’s in the red

LABOUR leadership wannabes did not need Keir Starmer’s invitation to start looking for another leader if he has to quit over Beergate.

They’ve been at it since he was shunted into the job two years ago.

There was feverish jockeying among rivals at last year’s party conference in Brighton, amid blatant criticism of his lacklustre leadership.

Since then he has had to plead with yawning Shadow Cabinet ministers to stop calling him “boring” behind his back.

Now, even as holder of one of the most senior roles in British politics, Starmer could be a winning answer to the Pointless question . . . name any Labour MP for Holborn and St Pancras since 2015.