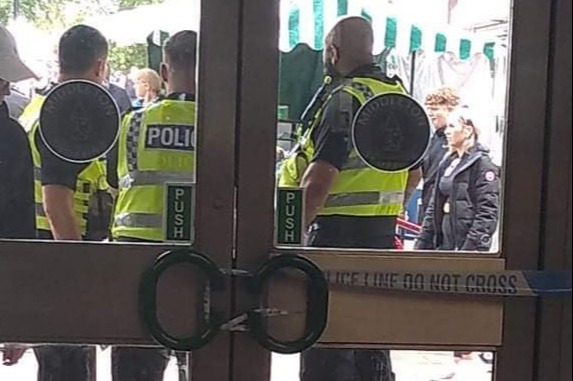 
A MAN has been stabbed five times in a “senseless” attack in the middle of a busy shopping centre in Manchester.

The victim, in his 40s, was attacked in broad daylight just before 1pm on the first floor of Middleton Shopping Centre.

He was rushed to hospital with “serious” stab wounds, and a man has been arrested on suspicion of attempted murder.

One witness told the Sun: “The guy was on the floor, and covered in blood. It happened on the first floor of the shopping centre.

“He was conscious and moving around when he was treated he was talking. They had stripped him down to his boxers to treat him.

“Police shut the whole shopping centre down to deal with it.”

Officers have described the attack as “shocking and senslesss” but are unclear on the motive behind it.

Police are continuing to investigate the horror incident, and are appealing for anyone with footage of to come forwards.

The entire shopping centre has been cordoned off with a large police presence remaining on the scene.

A forensics tent has also been erected just outside of the entrance to the complex, and cops confirmed a knife has been recovered.

Chief Inspector Trevor Harrison said: “It is quite shocking that an incident such has this has taken place in broad daylight in the middle of a busy Saturday, and at this time we are unsure for the motive behind this senseless attack and exactly who was involved.

“Thankfully, despite suffering five suspected stab wounds, the victim is in hospital to receive treatment in a stable condition and we will do our best to support him during his recovery.

“Our detectives are working at the scene and are expected to do so for the remainder of the day.

“While this may cause disruption, it is vital that a thorough investigation takes place, and with that I appeal to anyone with information or video footage to contact us with as much detail as they possibly can.”