From Covid to curtains: Rise and fall of Boris Johnson’s premiership 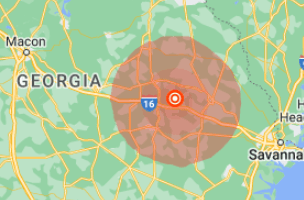 
A MAGNITUDE 3.9 earthquake shook homes in Georgia leaving residents stuns as the tremor sounded “like thunder.”

Impacts of the quake were felt as far away as Atlanta and into South Carolina as the epicenter struck near the city of Metter.

The tremor struck at a depth of 800 meters and was felt across much of central Georgia, according to the United States Geological Survey (USGS).

USGS initially reported the quake to be magnitude 4.5, but later revised the Richter Scale figure.

Many residents were jolted awake by the earthquake, which is relatively rare in Georgia.

The center of the quake was found under the Earth’s surface in Candler County, located between Macon and Savannah along Interstate 16.

The shaking was mostly confined to Georgia but was also felt in neighboring South Carolina.

South Carolina was also recently shaken by a rare quake, with a magnitude 3.3 tremor being felt last month.

“I wondered what the sound and earth trembling/shaking was this morning,” one resident said.

“Very mild, but spooky early in the morning. It felt and sounded like close thunder.”

One added: “Still can’t believe that happened, earthquakes barely happen in Georgia so I was surprised.”

And another added, “I thought I was the only one who felt that Georgia earthquake,” while one said, “first earthquake ever for me.”

The quake is reported to have been felt in Augusta, Statesboro, Atlanta, Savannah, and Macon.

Hundreds of people were already flooding the USGS website with reports of feeling the tremor in the early hours.

Moderate to light shaking was reported around the epicenter, becoming weak as they moved further outside towards Augusta and Macon and into South Carolina.

“There are almost NEVER earthquakes in Georgia but evidently one happened a few minutes ago,” one resident wrote on Twitter.

“So I texted my friend to be like ‘hey, did you feel the earthquake just now?’

“And she was like ‘oh is that what that was? I thought we were just getting bombed.'”