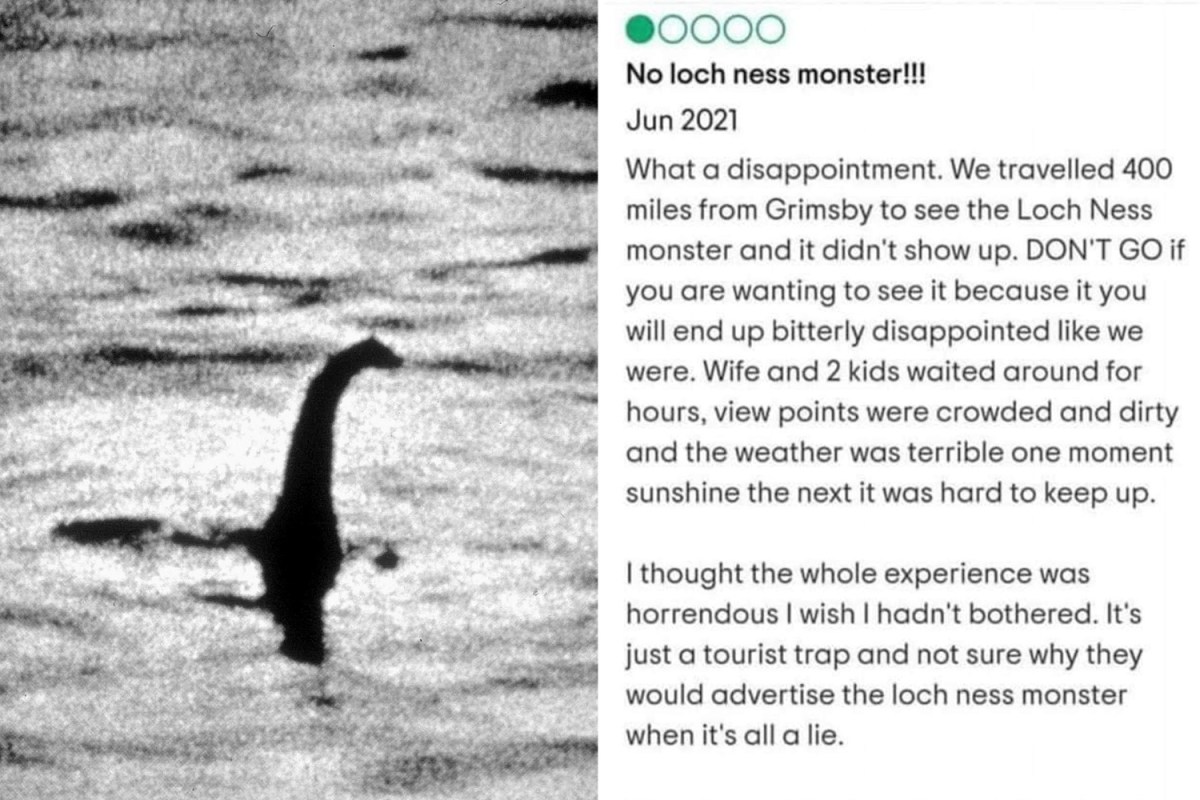 
A HILARIOUS review of Loch Ness has been left online after a heartbroken visitor failed to spot its legendary “monster”.

The writer, known as Ron, drove more than 400 miles with his family in search of the infamous creature.

But after spending hours in search of Nessie, the dad wrote a scathing review on TripAdvisor, telling of his “bitter disappointment”.

He gave Loch Ness just one star, writing: “What a disappointment.

“We traveled 400 miles from Grimsby to see the Loch Ness Monster and it didn’t show up.

“Don’t go if you are wanting to see it because it you will end up bitterly disappointed like we were.

“Wife and two kids waited around for hours, viewpoints were crowded and dirty and the weather was terrible, one moment sunshine the next it was hard to keep up.

“I thought the whole experience was horrendous, I wish I hadn’t bothered.

“It’s just a tourist trap and not sure why they would advertise the Loch Ness Monster when it’s all a lie.

“There’s much better places in Scotland, won’t be coming back.”

A screenshot of the review, shared last Wednesday, was posted online with the caption “Maybe they were just unlucky”

The post now has over 325 likes, with around 100 people commenting on the bizarre review.

Reviewer Gary Philips said: “It must just be your bad luck.

“We are camping by the loch, and Nessie has just come out straight in front of us… awesome.

“Then… if wasn’t enough, a bloody UFO just flew over! What a day, love Scotland”.

We traveled 400 miles from Grimsby to see the Loch Ness Monster and it didn’t show up.

Nicki Parrott replied: “It doesn’t like the midges, so it swam south”.

Garry Park added: “Plenty of monsters in Grimsby. Why travel to see one?”

The family will be even more disappointed as reports claim Nessie was spotted for the second time in 11 days earlier this month.

A tourist claimed to have seen the creature rise two feet from the water giving the visitor the fright of his life.

Experts have never been able to prove Nessie is real despite numerous “sightings” over the years.

Meanwhile, some boffins say the Loch Ness Monster could just be a whale’s penis.

A study by researchers in the Archives of Natural History journal claim the beast’s neck is just a whale penis.

The study speculated that many accounts of large mysterious sea creatures with a “serpent-like tail” were actually a large baleen whale and its “snake-like penis”.

They added that other accounts could be attributed to the male members of certain whale species, which can be at least 1.8 metres long and are sometimes spotted rising from the water during mating.

The bizarre theory has prompted the fact-checking website Snopes.com to investigate in a bid to clear things up.

The team at Snopes said: “The most famous photo of the Loch Ness Monster, dubbed the ‘surgeon’s photograph’, was a hoax that was created with a toy boat and some putty.

“While the famous picture of the Loch Ness Monster certainly wasn’t a case of mistaken whale-penis identity, and while whale-penis sightings probably can’t explain every sea serpent sighting throughout history, it is plausible that some of these ‘sea serpents’ were attached to the bottom of a whale.”