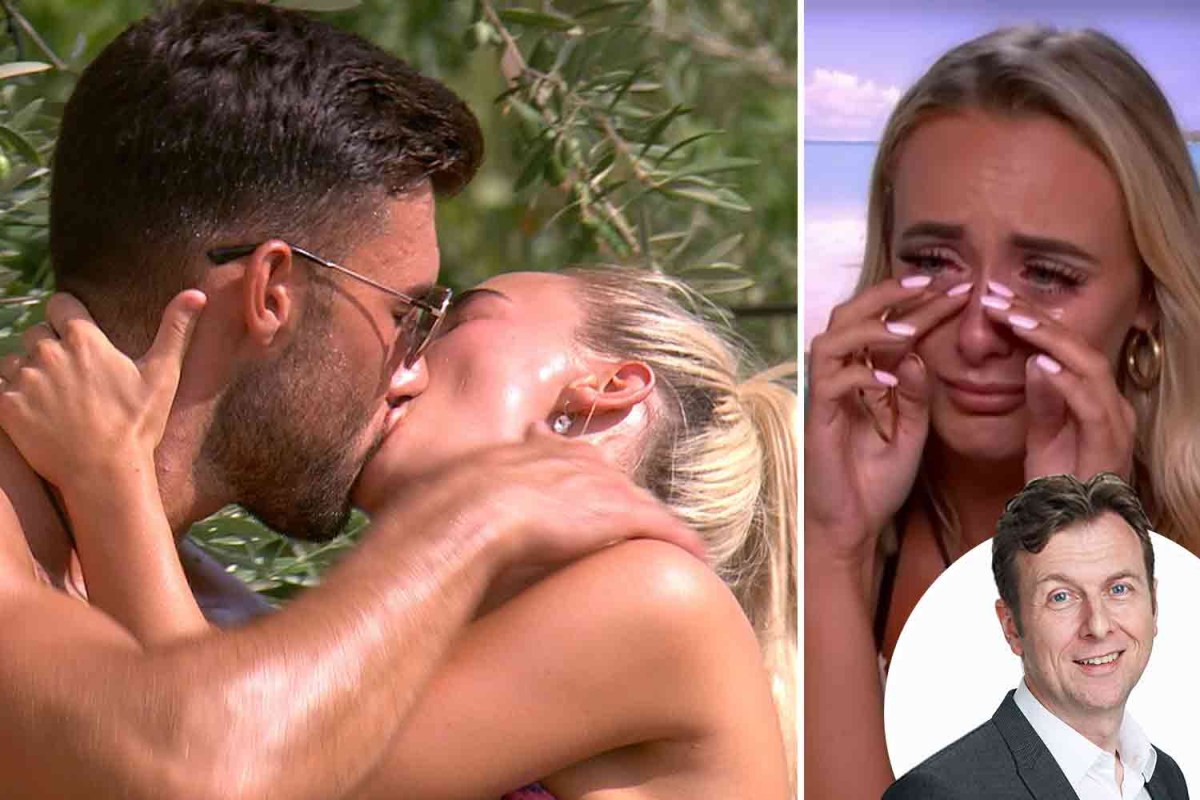 
AFTER a solid month of nothing, something finally happened on Love Island last week and three ­million ITV2 viewers nearly fell off their sofas with shock.

Welsh brickie Liam, who had been coupled up with Millie, snogged Lillie in Casa Amor.

Huge, I realise, but it’s an event that needs to be placed in context, fairly urgently.

Because, since June 28, when they entered the villa: A third wave of the Covid pandemic has swept the globe.

US troops have pulled out of Afghanistan.

You get the picture then. It’s not even registering a silent bedtime fart on the Richter scale of world news.

In terms of this series, ­however, the Millie/Liam/Lillie triangle was seismic, as you have to remember this year’s Islanders entered the villa to a fair degree of fanfare and hype after a 16-month absence from our screens.

Just as quickly, however, it became obvious the bookers had lumbered us with a bunch of largely incompatible contestants who clearly regarded themselves as superstars-in-waiting but were nothing more than high-end wannabes and attention-seeking bores.

At various stages, they’ve included Aaron, who organises “high-end events”, Danny, who’s got his own “high-end clothing range”, and travel agent Rachel, who’s got lots of “high-end clients”, and a high-end ar*e.

Apart from Jake and Liberty, there was no sort of sustainable romance or storyline to go with any of them, and so the production team turned its attention to the spare parts, like hair-tossing Chloe, with her drawling quack of a voice, who craved the company of the opposite sex and sparest-of-the-lot Hugo, who was clearly so appalled by the idea of female company he’d even flagged it up in his video intro.

“I’m the inventor of the half-night stand,” he boasted to the dating show.

“I like my own bed, so I either have to boot them out or do a runner.”

They’d have been as well waiting for the ornamental rabbits to mate, after an ­audition like that one.

ITV2, though, didn’t pick up on the hint and followed Hugo like a stalker for a month, with predictable enough results.

And it continued not ­happening right up until my sodding deadline last week, when they threw the boys into Casa Amor with six girls who were prepared to snog ­anything for an extended stay on the show. Even Hugo.

The fallout is ongoing back at the main villa.

Most shocked of the wronged women is the ­forgivably stupid but stupidly forgiving Millie, who clearly hasn’t seen Liam’s entry video where he dubbed himself “Mr Steal-Your-Girlfriend” and claimed: “If I’m coupled up with someone and my head’s turned, I’ll have no problem pursuing that.”

Mr Steal-Your-Girlfriend, incidentally, is now grovelling like a dog who’s messed the kitchen floor and it is, I ­suppose, a TV spectacle of sorts.

What Casa Amor hasn’t quite done, though, is save the seventh series or give me the impression Love Island will ever return to the innocent, funny, carefree days before tragedy consumed the show.

This is a major problem for ITV because other “big” stories to break, while they’ve been in the villa, included the axing of The X Factor and news I’m A Celeb remains stuck in North Wales, minus at least one big star, until further notice.

But hey. On the plus side, Millie re-coupled with Liam on Wednesday.

So, you know, swings and roundabouts.

WORRIED that television was running dangerously low on celebrity cooking formats, ITV has commissioned yet another, on Tuesday nights.

The show’s called Cooking With The Stars and according to one of the hosts, Emma Willis, “It’s a contest like no other.”

In as much, I suppose, as it’s exactly like all of them, apart from the addition of “the golden frying pan” – a break-glass-in-case-of-emergencies gong which contestants are allowed to whack if they need help with their recipe, or just want to phone up their agent and scream: “I thought this was sodding MasterChef?”

Compared with normal run-of-the-mill cookery shows, Cooking With The Stars also has an overabundance of everything.

There are eight celebrities, with eight mentoring chefs and two presenters, because it is now strictly forbidden, I believe, for a television show to air without the presence of Tom Allen.

None of them ever takes the hint either. Not even when they’re eliminated.

They just hang around, like the fumes from Harry Judd’s nerve agent sauce, so the only thing you can hear above the background din and cutlery clanking is Rosemary Shrager shouting: “I LOVE COQ AU VIN.”

The “vin” bit rather than the coq, you’d hope, as they’ve paired the poor woman with Johnny Vegas, 50, whose bellowing man-child routine was wearing pretty thin until he said something that made me choke with laughter, on Tuesday.

“I have this feeling,” he said, “people think I’m here purely for entertainment value.”

AS for Laurel Hubbard in the women’s weightlifting event? She let all the other women do the heavy lifting, while completely over- estimating her own strength. Typical bloke.

Unexpected morons in the bagging area

THE Chase, Bradley Walsh: “Who won BBC’s Sports Personality Of The Year 35 years before her daughter won it?

Bradley Walsh: “According to the proverb, what does a rolling stone not gather?”

OLYMPIC Filth Corner. Athletics, Steve Cram: “Shelly-Ann Fraser-Pryce. She likes a good semi. Be interesting to see if she goes flat out with this one.”

THE rancid spectacle of former contestants, like Jedward, dancing on The X Factor’s grave, just so they can play the victim.

News reporters sounding genuinely gobsmacked that skateboarding medals had been won by teenagers rather than, say, the cast of Last Tango In Halifax.

The mental health mafia shutting down all debate about Simone Biles’ Olympic withdrawal (I thought it was “a conversation?”).

And an over-sharing Beeb continuity announcer who introduced EastEnders by simpering: “Everyone’s worried about Isaac, me included. I hope he’s all right.”

Please grow up and shut up.

Give the child a complex

MEANWHILE, on EastEnders, it’s clearly time for that awkward “Richard Blackwood conversation” as Kim tells Denise: “Pearl’s started to ask questions about Vincent. Where is he? What’s he doing?”

Just don’t, whatever the hell you do, tell her he’s Felix on Hollyoaks.

You’ll give the child a ­complex.

How much longer must we all keep pretending Rosie Jones is funny?

Who the hell is Jeremy Vine’s Celebrity Gogglebox mate “Snoochie?”

Why is there an unsightly ponytail still attached to Matthew Wright, on This Morning?

And more to the point, why is there an unsightly Matthew Wright attached to the ponytail?

Lauren Williams: “I’m very happy with how I performed but I let it go and messed up.”

Shirley Robertson: “They’re absolutely flat-lining – their heart-rate’s through the roof.”

Nile Wilson: “The last thing you want is Simone to have a fatal injury. Or worse.”

GREAT TV lies and delusions of the month.

Weekend Best, Martin Kemp to Iain Stirling: “You’ve got to tell me all about Buffering. It sounds brilliant.”

SPL Live, Ian Crocker: “Hearts are back and it’s good to have them back.”

Cooking With The Stars, Johnny Vegas: “The joking finishes. I want this.” Finishes?

US HOST Bill Maher’s blistering demolition of the “woke Olympics”, on Real Time.

And the peerless Michael Johnson schooling all of his BBC colleagues in the art of Olympic punditry and how to talk up women’s sport without talking down the men’s version.

Lookalike of the week