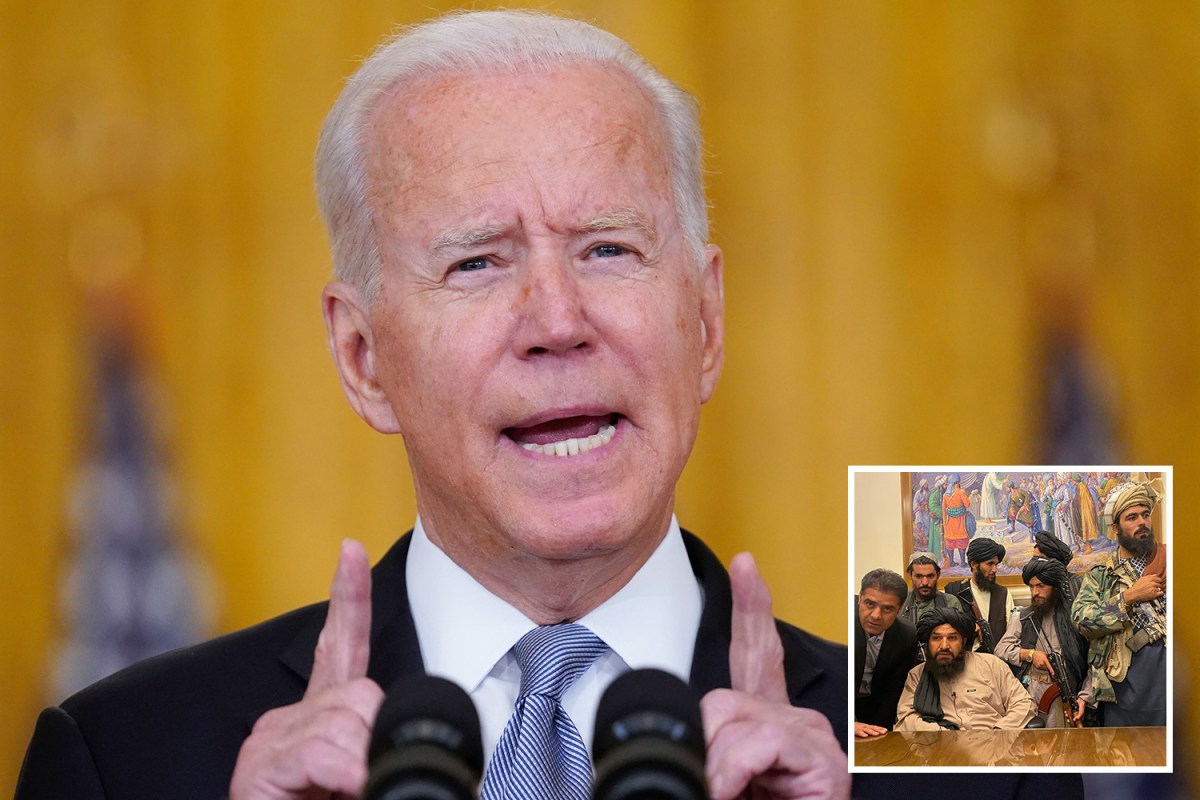 
PRESIDENT Joe Biden has dismissed the Taliban as “yesterday’s threats” while Afghans face brutal executions and rapes under their barbaric rule.

Biden said he”stands squarely behind” his decision to withdraw troops from Afghanistan as he addressed the nation after days of silence.

“Our only interest in Afghanistan remains today what it has always been, preventing a terrorist attack on America’s homeland.

“I have argued for many years that our mission should be narrowly focused on counterterrorism, not counterinsurgency or nation-building.

“That’s why I opposed the surge when it was proposed in 2009 when I was vice president.

“That’s why as president, I am adamant that we focus on the threats we face today in 2021, not yesterday’s threats.

“Today, the terrorist threat has metastasized well beyond Afghanistan.”

The President’s comments come as Afghans desperately attempt to flee the war-torn country – with thousands risking their lives in the process.

I am adamant that we focus on the threats we face today in 2021, not yesterday’s threats.

Residents have been left to fend for themselves while Taliban gangs set their sights on children as young as TWELVE as they hunt for sex slaves.

Chilling reports emerged in the wake of Kabul’s capture, suggesting the terror group are forcing females into marriage and demanding lists of women and girls.

Under their oppressive rule in the 90s, women were brutalized with cruel tortures and public executions – and it seems jihadists want to return to those ways.

Biden was criticized for dismissing the increasingly dire situation after already coming under fire for removing troops in the first place.

But he defiantly told reporters that he stands “squarely behind his decision” to withdraw U.S. forces and heaped blame on Afghanistan’s president and military leaders.

He said: “The truth is, this did unfold more quickly than we had anticipated.

Biden added that he will not repeat the mistakes of the past.

I stand squarely behind my decision.After 20 years, I’ve learned the hard way that there was never a good time to withdraw U.S. forces.

“I stand squarely behind my decision”, Biden said in a televised address to the nation from the White House East Room.

“After 20 years, I’ve learned the hard way that there was never a good time to withdraw U.S. forces.”

He added that the decision to leave Afghanistan is the right one for America.

“We will end America’s longest war after 20 long years of bloodshed, the President said.

“The events we’re seeing now are sadly proof that no amount of military force would ever deliver a stable, united, secure, Afghanistan.

“I am president of the United States of America and the buck stops with me.

I am deeply saddened by the facts we now face…I do not regret my decision.”

Biden heaped blame on the outgoing Afghan administration, which he said had “collapsed, sometimes without trying to fight”.

He said: “It is wrong to order American troops to step up when Afghan forces would not.

“American forces cannot and should not be fighting in a war and dying in a war that Afghan forces are not willing to fight for themselves.”

He also said that the Afghan government, led by president Ashraf Ghani, failed to take his advice and negotiate a political settlement with the Taliban.

Biden said: “Mr Ghani insisted that the Afghan forces would fight. But obviously he was wrong.”

American forces cannot and should not be fighting in a war and dying in a war that Afghan forces are not willing to fight for themselves.

The President also threatened “devastating force” against the Taliban if they interfere with US plans of removing troops and allies from Afghanistan.

He told Americans: “We’ve made it clear to the Taliban [that] if they attack our personnel, or disrupt our operation – the US… response will be swift and forceful.

“We will defend out people with devastating force if necessary.”

Biden described the images coming out of Afghanistan, especially of crowds trying fleeing the country at Kabul airport, as “gut-wrenching.”

It comes as video of Afghans clinging to a U.S. Air Force plane as it prepared to take off stunned viewers after being shared on social media.

He ended his speech by asking God to “protect our troops and our diplomats.”

Biden rushed back to the White House for his speech after spending time at presidential restreat, Camp David.

His critics lined up to take aim at the underfire president saying he was in “hiding” or “on vacation”.

The withdrawal from the country has been widely compared to the US evacuation of Saigon at the end of the Vietnam War.

And Sunday Boris Johnson blamed the US for the advancement of the Taliban in Afghanistan claiming President Biden “accelerated” their control.