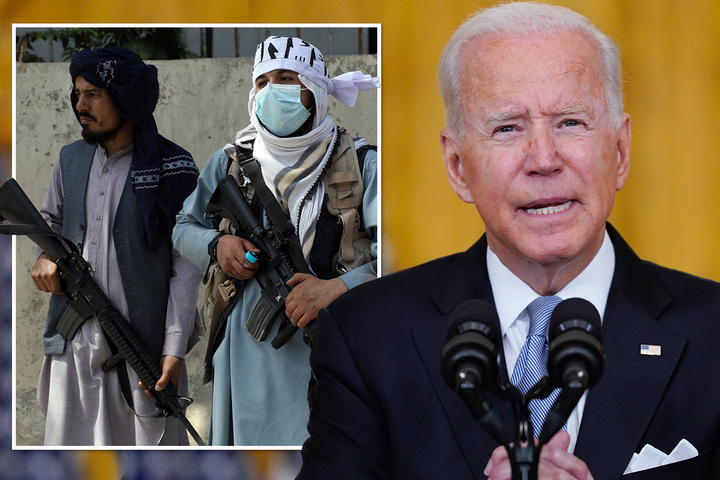 
PRESIDENT Joe Biden has blasted the Afghan army for “giving up” and has said that he “stands squarely behind” the decision to pull US troops out of the country.

Biden has finally returned to the White House to address the nation on the crisis in Afghanistan after days of silence.

He told reporters that he stands squarely behind his decision to withdraw U.S. forces from Afghanistan and that the government’s collapse was quicker than anticipated.

Speaking about the chaotic situation in Afghanistan, Biden said Monday that he faced a choice between an agreement to withdraw U.S. forces or send thousands more U.S. troops back in for a third decade of war.

Biden spoke after the planned withdrawal of American forces turned deadly at Kabul’s airport as thousands tried to flee following the Taliban’s swift takeover of the government.

He added that he will not repeat the mistakes of the past.

“I stand squarely behind my decision”, Biden said in a televised address to the nation from the White House East Room.

Afghanistan political leaders gave up and fled the country.

“After 20 years, I’ve learned the hard way that there was never a good time to withdraw U.S. forces.”

He added that the decision to leave Afghanistan is the right one for America.

He said: “The truth is, this did unfold more quickly than we had anticipated. So what’s happened?

He added that the U.S. could not provide Afghan forces “with the will to fight” for the future.

He also said that the Afghan government failed to take his advice and negotiate a political settlement with the Taliban.

“Mr Ghani insisted that the Afghan forces would fight. But obviously he was wrong.”

During his speech, he told Americans that “the buck stops here” and he will not “pass the responsibility [of removing troops from Afghanistan] to a fifth president.”

POTUS also threatened “devastating force” against the Taliban if they interfere with US plans of removing troops and allies from the country, a decision he strongly stands behind.

He added: “I will not ask our troops to fight on endlessly in another country’s civil war.”

Biden described the images coming out of Afghanistan especially at the airport in Kabul, where Afghans descended in hopes of fleeing the country as “gut-wrenching.”

Video of Afghans clinging to a U.S. Air Force plane as it prepared to take off had circulated widely on the internet.

Biden said Monday the U.S. will continue to support the Afghan people, push for regional diplomacy and speak out for the rights of Afghans.

He ended his speech by asking God to “protect our troops and our diplomats.”

Yesterday Biden was nowhere to be seen in Washington DC, instead leaving for Camp David, the presidential retreat, on Thursday and remains there.

Biden’s critics lined up to take aim at the underfire president saying he was in “hiding” or “on vacation”.

The withdraw from the country has been widely compared to the US evacuation of Saigon at the end of the Vietnam War.

Trump appeared to blame Biden for the Taliban’s surge in Afghanistan as the US continues to pull troops out.

“It is time for Joe Biden to resign in disgrace for what he allowed to happen in Afghanistan, along with the tremendous surge in Covid, the border catastrophe, the destruction of energy independence, and our crippled economy,” the statement said.

And yesterday Boris Johnson blamed the US for the advancement of the Taliban in Afghanistan claiming President Biden “accelerated” their control.