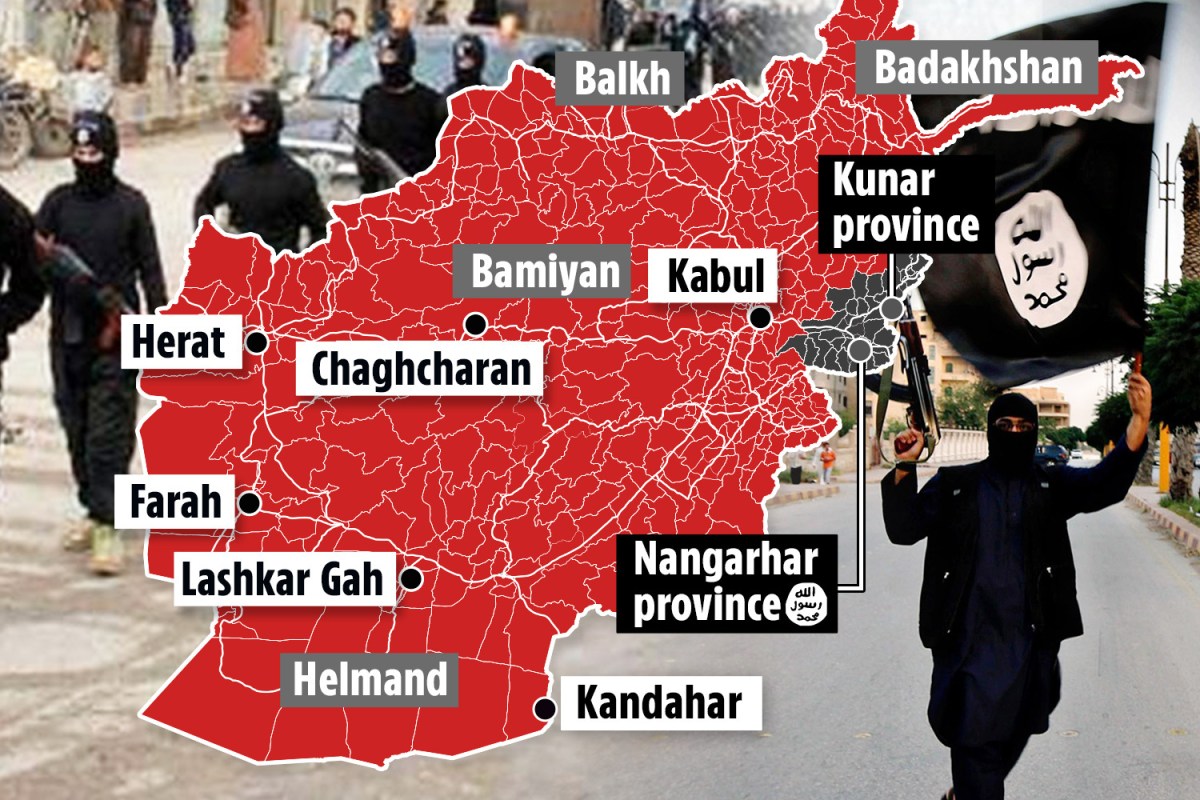 
A TERRIFYING new ISIS splinter cell is waging a war against the Taliban in Afghanistan as it seeks a new caliphate in the war-torn country.

ISIS militants have been fighting the Taliban for control of territory for the last six years with little success – but the horror bombing of a girls’ school in Kabul in May has sparked fears of the group’s grander ambitions to dominate Afghanistan.

ISIS created the Islamic State-Khorasan Province (ISKP) in Afghanistan in January 2015 and it was mostly concentrated in the eastern province of Nangarhar on the border of Pakistan.

Back then, ISIS was recruiting defectors from the Taliban and poaching fighters who were unhappy with their own leadership’s lack of success on the battlefield.

Fighting immediately broke out between the two terror factions in 2015 and battles also erupted in 2017 when ISKP captured three drug dealers selling opium to raise funds for the Taliban in the northern province of Jowzjan.

It is difficult to know exactly how many ISKP fighters remain active and the number of covert cells that may be dormant in urban areas.

Dozens of militants were also killed in clashes between the two sides along the Iranian border in the same year.

Although a number of ISKP leaders have been killed in US strikes since 2016, and Afghan forces arrested and captured two more ISKP leaders in 2020, officials have warned the terror group remains a terrifying threat.

US military and intelligence officials said the terrorists appear to have recovered after being pushed to the brink by the US and Afghan forces – and the Taliban – and they are increasingly determined to gain publicity and control, VOA reports.

Even without large swathes of territory under its control, ISKP has kept a robust team of committed fighters scattered across Afghanistan.

The ISIS branch launched multiple deadly attacks in 2020, including assaults on the Kabul Gurudwara, the Medicines Sans Frontiers clinic and the university in the capital, and the 20-hour long Jalalabad prison raid.

The Council for Foreign Relations estimates there are still 2,200 active ISKP fighters and the group has ramped up its bloody offensive in 2021.

Just three months ago, ISKP killed more than 100 people – most of them children – after bombing a school in Kabul.

And ISKP also claimed responsibility for the slaughter of ten people in June who worked for an international demining NGO in Baghlan province.

Many of those killed belonged to the ethnic Shia Hazara minority – a group which ISKP has long targeted.

In a paper published this month, the US Congressional Research Service warned about the “prospect of Taliban hardliners defecting to ISKP”.

And analysts at the Stimson Center, an American think tank, said ISKP remains “capable of executing high profile attacks in the national capital Kabul with alarming lethality and sophistication”.

The experts warned: “It is difficult to know exactly how many ISKP fighters remain active and the number of covert cells that may be dormant in urban areas.”

ISKP currently has control over just a few districts in Nangarhar and Kunar, but since the signing of the US-Taliban withdrawal agreement, ISKP has increasingly targeted cities and foreign assets.

US Special Representative to Afghanistan, Zalmay Khalilzad, warned the fighting between Afghan forces and the Taliban “plays directly into ISKP’s hands” as it ties up resources that could be used against ISKP.

But the Taliban are now thought to be in complete control of Afghanistan and Afghan government troops have been seen surrendering to them.

And although ISIS fighters show no signs of surrendering, General Kenneth F. McKenzie Jr, commander of US Central Command, told lawmakers last year that the Taliban operations against ISKP were “very effective”.