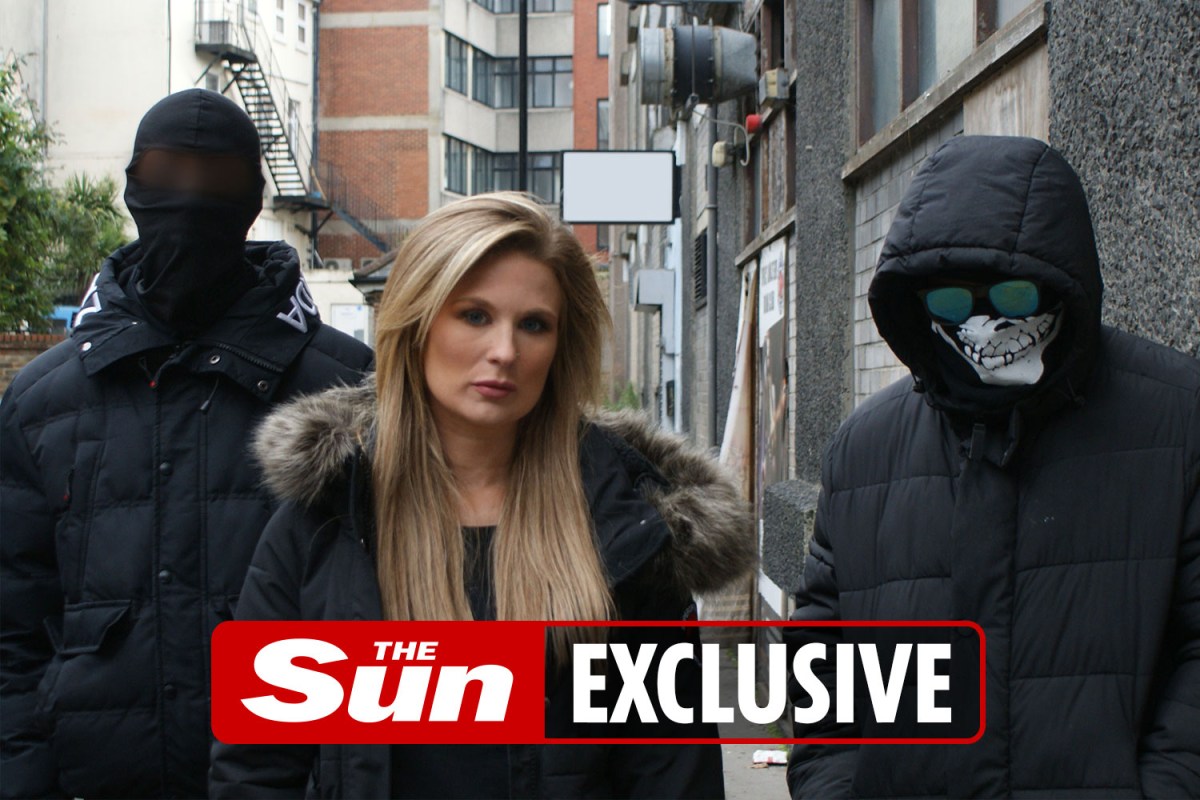 
BATTERED and bleeding after a savage beating, Ashleigh* tasted the cold metal of a gun in her mouth and prayed her attackers would pull the trigger and “get it over with.”

The Kent teenager was just 17 when she was targeted by a kidnap gang, bundled into a car and driven to a remote spot where she was tortured, beaten between the legs with a baseball bat, and left for dead.

Ashleigh tells her shocking story in the documentary, Britain’s Kidnap Gangs, available on BBC3 from today.

The report, fronted by investigative journalist Livvy Haydock, includes chilling chats with gang members and a kidnapper for hire who uses a blowtorch, keeps bolt-cutters to slice off toes and boasts about putting a victim’s penis in a cigar-cutter.

While most kidnaps are confined to gang-on-gang attacks, Livvy also reveals a huge rise in innocent people targeted for cash – with one in five victims having no link to crime.

She also talks to middle-aged professional James* – kidnapped outside his house in a suburban street before being held in a warehouse and tortured.

“As a journalist I’ve met a lot of violent people but the most grotesque thing about this was just the sheer levels of torture and violence against people who aren’t even trying to fight back,” Livvy tells The Sun.

“They can’t do anything. And the fact they’re put through so much on top of being kidnapped is disgraceful.

“It’s pure exploitation of power, indulging a violent streak and totally disproportionate to the situation.”

Beaten with baseball bat and gun in a mouth

Before her attack, Ashleigh had been targeted by a county lines gang – who used vulnerable teens to run drugs from London to smaller towns in Kent – and had been held in a hotel room for months.

After escaping, she was lured to a meet by one of the members but instead was bundled into a car and had her hands and legs tied together as her attackers drove her miles away from her Kent home.

“There were weapons put in the back of the car and I knew there was a gun from the metal clinking,” she says, adding that they frequently aimed two fingers at her in a terrifying shooting gesture.

“When we finally arrived at the destination, they dragged me into a secluded area, they hit me with a baseball bat.

“He made me open my legs and he hit me in the private parts with it. He shoved a gun in my mouth, cocked it in my mouth.

“I just looked at him and prayed to the Lord he would pull the trigger.

“I didn’t want it to be dragged out any longer than it needed to be. I just wanted to say ‘shoot me’ because that’s what I wanted to happen.”

I just looked at him and prayed to the Lord he would pull the trigger.

Left for dead by the gang and unable to move, she was eventually found by a passerby and rushed to hospital.

Her whole family were forced to move out of the area for their own safety and.

Her kidnappers received long sentences but Ashleigh still suffers both physically and mentally.

“Every day my body is hurting, every day I think someone is going to kick through my door, and I have to live with that for the rest of my life,” she says.

Asked why the gang launched the terrifying attacks she says simply: “Because I wanted to leave, I wanted out. And to their minds I belonged to them.”

Chained to radiator and beaten for three days

Another victim, Daniel*, was kidnapped in Cardiff after going back on an agreement to launder money through his bank account.

His attackers took him to a house in a residential street, tied him to a radiator, beat him, shaved his head and then sent shocking images to his distraught mum, demanding £1,500.

One message to her read: “If you want your son to come back to you, you’d better send the money. Or I will start doing things to him that will make you cry. Believe me.”

Daniel’s mum called the police, who found him handcuffed to the radiator, bleeding and almost naked. He’d been held hostage for three days.

“Physical injuries will recover, on the whole,” says Livvy.

“But no matter how well some of the victims say they are, that’s going to stay with them forever, because you can never unlive that.

“It’s an experience that you will never ever delete from your life.”

Genitals stapled and hung from ceiling by hands

As well as victims, Livvy also tracked down some gang members who admit to using kidnap to rob rival drug dealers, with one West Midlands kidnapper telling her: “I have to put fear into them or physically harm them – then they’re more likely to tell you where the money is.”

But perhaps the most chilling interview is with Birmingham kidnapper for hire, given the alias Zulu, who tells Livvy: “I enjoy it. I love torturing them, I’ll take it to the next level.”

He takes her to a remote industrial estate where he tortures victims so their screams can’t be heard, and shows her an arsenal of weapons, including a metal ring used as a “finger-snapper”, a blowtorch and bolt-cutter before explaining his methods.

“The van will reverse in, we’ll quickly tie them up,” he says. “As quick as they’re being tied up, they’re being stripped of everything, violated.

“Flick them backwards on a chair, put a wet towel over their head and pour water over them, make them think they’re drowning.

“There’s loads of ways you can torture people without killing them. Get their balls and staple them to their legs, hang them by their hands and proper punch the life out of them.

He also boasts that with one victim: “I pulled his c*** through a cigar cutter and squeezed until it started bleeding. Then he told me everything I needed to know.”

Despite his chilling brutality, Zulu says he targets only other criminals, would never hurt a woman or child and would not attack “innocent people who have done nothing wrong.”

But he says the younger gangs who “have something to prove” are more likely to “terrorise people for nothing.”

James was attacked by three men as he parked his car on the quiet London street where he lives.

“I thought it was a typical mugging so I handed over my watch and wallet and then they said ‘get up and get into the car’,” he says.

“I tried to run, I was tackled to the ground, my head hit the road, my teeth broke, my eye socket went out and that’s when I saw the knife. Three big men. There’s no chance. They put a hood over my head and off we set.

“Then we were in a lock up, they literally ripped the suit off my back. They found a flex in the car and tied me up.”

Two of them left with James’ bank card and stole £600, while the third pulled out a knife – leaving James’ fearing for his life.

“I thought ‘if this is it, make it quick’,” he says. Eventually he was dumped by the roadside and the kidnappers escaped in his car.

Police believe he was chosen because it looked like he had money and one gang member from London, named Razyr, reveals they often study their victims for months, staking out wealthy streets and watching the movements of house owners.

“Some kidnaps are random, some you do on the spur of the moment, but some of them can be planned out proper,” he says.

“Social media plays a big part in it – putting up their cars, their designer clothes, could be a Rolex. If it’s worth it for me and my guys then we’re probably going to come and take it off you. That’s what people like us do.”

Livvy believes the targetting of ‘civilians’ is down to inexperienced gangs who have been groomed into a life of crime.

“Zulu was terrifying because of his level of criminal behaviour and because he was  unpredictable,” says Livvy.

“But he’s part of a crime on crime existence that’s been going on for a long time.

“The fact that even he disapproves of the younger lot, where it seems to have leaked onto the streets, is even more terrifying.

“Gang members now have a reach via county lines to people that would have been inaccessible to them before, and social media and mobile phones play a big part in that.

“The children that are being picked up and groomed within county lines are learning these tactics and using them against others, but with a childlike mentality.

“It doesn’t make sense to kidnap James – they only got £600 – and what worries me is the level of violence used by inexperienced youths.

“I’ve not seen anything quite like that before in the UK.”

The National Crime Agency, who investigate the most serious kidnaps, now estimates that one in five victims is innocent – but Livvy believes that number would be much higher if kids groomed by gangs were taken into account.

“Someone like Ashleigh, for instance, has been groomed to be in part of the county lines so in my mind, she’s a victim who is forced to become a perpetrator,” she says.

“There are many more cases like that because it’s not as simple as criminal vs innocent – situations are complicated.”

Britain’s Kidnap Gangs is available on BBC3 from Tuesday, Aug 17

*The victims names have been changed