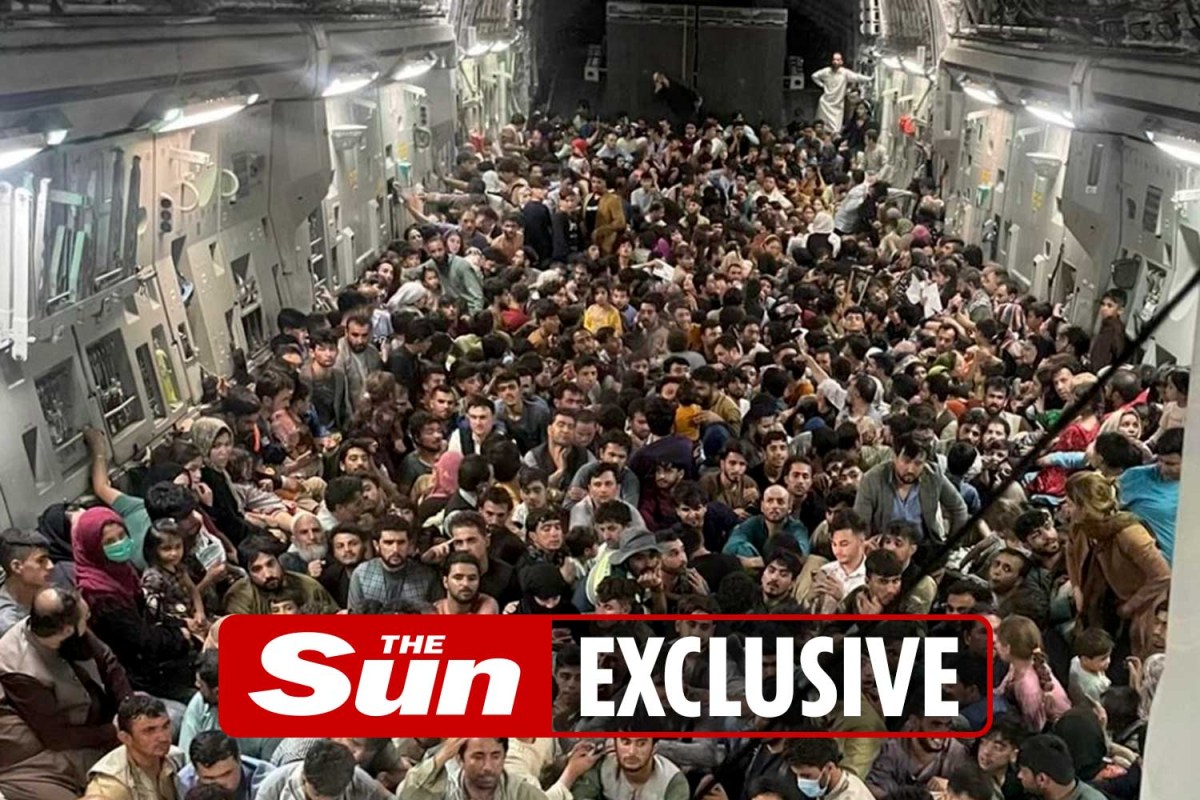 
AN INCREDIBLE image has emerged showing 640 Afghans cramming onto a US cargo jet as they flee the Taliban carnage in Kabul.

The harrowing photo showed the desperate crowd packed onto the aircraft after they ran on before the military were able to close the ramps on Sunday.

The plane – which is equipped to comfortably fit 150 soldiers or 171,000lbs of cargo – was rushed by the terrified residents desperate to escape the war-torn country.

The crew on the US Air Force C-17 numbered RCH 871 “made the decision to go” despite the extra passengers, an unnamed defense official said.

It comes after a shocking video that appears to show stowaways falling to their deaths from a transport aircraft taking off from Kabul airport.

The three apparently fell hundreds feet from the C-17 transport plane as thousands of desperate Afghans try get out of the country after the Taliban victory.

The two who died are believed to aged 16 and 17 and video posted later appeared to show residents collecting their bodies.

The chaos at Kabul Airport has already seen seven people dead with more people clambering over walls to get in.

Harrowing video shows stowaways falling several hundred feet to their deaths after being thrown from a C-17 transport aircraft taking off from Kabul airport.

Other images taken from the ground show stowaways clinging to the plane as it took off.

Separate footage shows Afghans running alongside a C-17 as it prepares to take off with around a dozen holding on to the wheel bay.

Sporadic shooting was heard throughout the day and the US military said its forces had shot dead two armed men by the airport security fence after coming under fire.

Civilian flights were suspended amid the chaos and then the US military – which controls the airport – said military flights were halted as they re-established security and clear people from the airport.

At one stage, US Apache helicopter gunships were brought in to clear a path for the transport planes, swooping low to disperse people massed on the runway and firing warning shots.

American troops guarding the airport were forced to fire shots into the air but it’s unclear if those who died were hit by bullets or crushed in the stampede.

In total 18 people have reportedly been treated for gunshot wounds at a hospital in Kabul.

In the city itself there were reports that Taliban have reportedly begun house-to-house searches with a ‘kill list’.

The stampede began on Sunday night and daylight saw another wave of people swarm to the airport as the exodus continued.

Desperate people were also filmed trying climb up a ladder to get on a civilian plane while others were seen being pulled on board another aircraft.