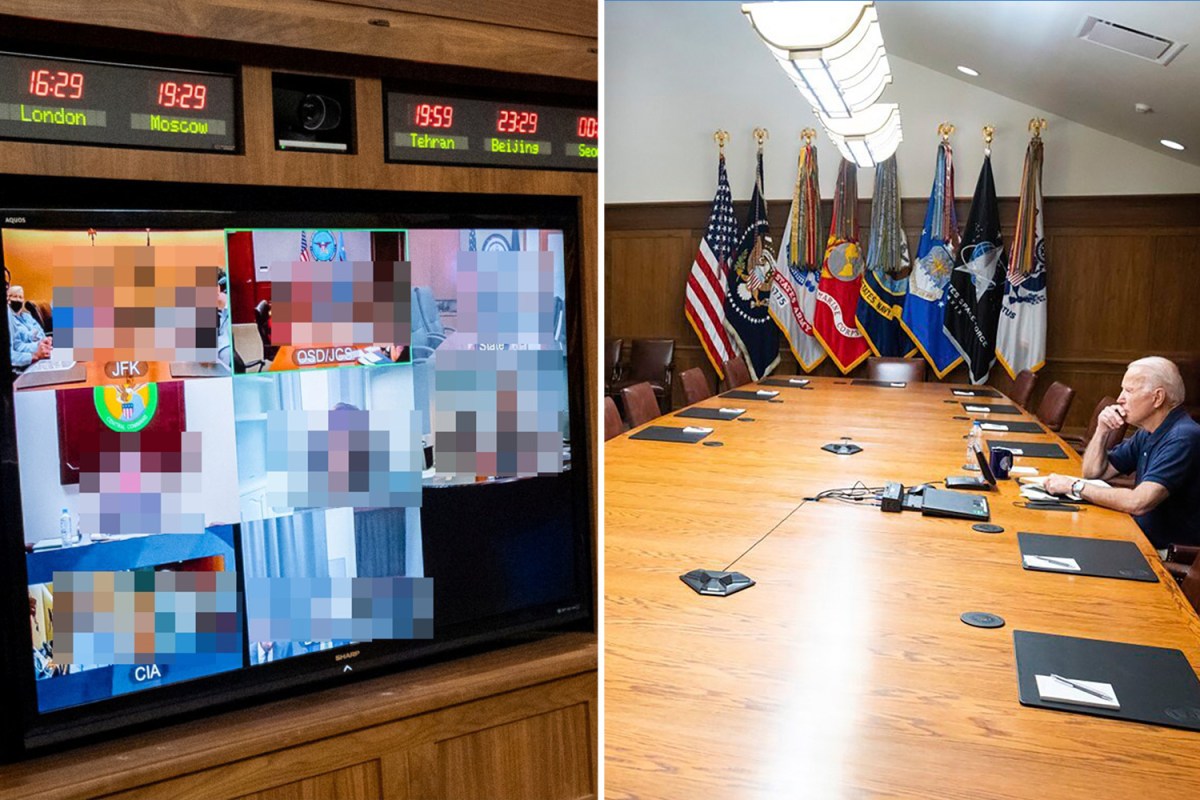 
TWITTER users branded Joe Biden “incompetent” as he appeared to “out CIA agents” during a conference call about the situation in Afghanistan.

The White House uploaded a photo to Twitter on Sunday showing Biden addressing intelligence officials from the situation room.

Social media users were quick to point out that officers’ faces appeared to be showing on the call.

Vice president Kamala Harris was on the call as were personnel from the CIA and Doha Station, Meaww reports.

One tweeted: Did you seriously just out CIA and Doha station? Beadwindow, Mr. President.”

Some speculated that Biden may have put the CIA at risk by “identifying” their agents.

Another posted: “Incompetence abounds at every point of the compass, or so it would appear.”

A third said: You’d think they would have taken this down the first time someone pointed all of the flaws in this pic. Not this administration though.”

Some Twitter users defended the president as he received a barrage of criticism online.

Replying to one critic, one commented: “Does it look like he’s outing CIA agents, you moron? These people wouldn’t be on a zoom call and photographed by the official WH (White House) photographer if they were undercover.”

Joe Biden has been widely criticized for being on vacation while Taliban insurgents are on the verge of establishing the rule.

He left Washington DC on Thursday as he headed for the presidential retreat Camp David.

Sen Tom Cotton said: “Why is Joe Biden in hiding? He should immediately address the nation and answer for the catastrophic situation in Afghanistan. Conference calls between cabinet secretaries and senators don’t cut it in a crisis.”

Former President Donald Trump has called on Biden to “resign in disgrace” following the Taliban’s advances.

In a statement, he said: “It is time for Joe Biden to resign in disgrace for what he allowed to happen in Afghanistan, along with the tremendous surge in Covid, the border catastrophe, the destruction of energy independence, and our crippled economy.

Biden blamed Trump for the “chaos” of the US pulling out of Afghanistan as he accused the Republican of cutting down forces down to 2,500 troops before leaving office.

It comes as thousands of people stormed planes at Kabul airport in a desperate bid to flee the war-torn country.

Petrified men, women, and children frantically climbed jetways as they tried to escape after Taliban insurgents stormed the capital.

All commercial flights have been suspended from the airport and only military aircraft will be allowed to operate.

Afghan President Ashraf Ghani fled the country after the Taliban stormed the capital Kabul and seized his palace.

Ghani, who did not say where he had gone, said he believed “countless patriots would be martyred” if he had stayed behind.

Taliban fanatics have released 5,000 prisoners and taken control of Kabul as the government dramatically collapsed on Sunday.

It’s feared that a Taliban regime will suppress the rights of women and girls.

Reports have emerged that fighters are “going to door to door” to round up young girls to be “sex slaves” for the terror group.

And, gloating gunmen paraded through the streets in US Humvees and chanted Allahu Akbar as they captured cities last week.

Biden has temporarily deployed around 5,000 US troops to help with the evacuation of embassy staff.

A photograph of a helicopter evacuating staff from the embassy in Kabul was uploaded on Twitter, sparking comparisons to the humiliating retreat in Vietnam in 1975.

Secretary of State Antony Blinken defended the mission as he told ABC’s This Week: “This is manifestly not Saigon.

“We went into Afghanistan 20 years ago with one mission in mind, and that was to deal with the people who attacked us on 9/11, and that mission has been successful.”